I was on a bus a couple of hours ago; a woman got up to be ready to get off at the next stop, and a guy sitting in one of the face-sideways seats started hassling her for not smiling. “Everyone else is smiling but you!” he informed her.

Nuh uh. I wasn’t, for one. I think there were others who weren’t.

He went on grumbling at her – sort of “joking” but in a pain in the ass way. She was certainly not amused.

It just reminded me, yet again, how odd it is the way women are considered a kind of public property, subject to being told what facial expression to have by total strangers and then hassled if they don’t comply. It would be so odd to do that to a man, but to a woman? Meh – it’s maybe a little rude, but it’s normal. 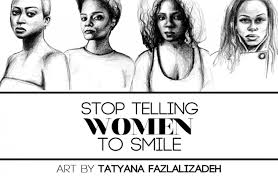