Oh hooray, Jaclyn Glenn has yet another video attacking feminists and feminism.

Even better, Dave Muscato, the PR guy for American Atheists, is energetically promoting it. Thanks, Dave!

Updating to add the intro to the vid:

Published on Jul 17, 2014
A video about Atheism+ and pussies. How appropriate. For those of you wondering- Atheism + is pretty much atheism plus radical feminism. This is my skit explaining my feelings on it 😉 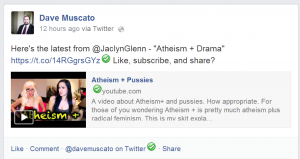 Do not tell me to stop fighting » « Salem canceled the contract