Reading Greta’s most recent post about…about friends and allies and misogyny and how to deal with it and talk about it. You know: what we’ve been talking about for months and months and months now. One thing that happened in the comments is that Justicar showed up to discuss the issues in a calm, reasoned, civil way…deceptively calm, reasoned, and civil. He’s not like that everywhere. He’s not like that at ERV and he’s not like it on his own blog.

Aerik pointed out one example that I don’t think I’d seen before (although who knows, maybe I did, I saw a lot last summer and no doubt I’ve forgotten most of it by now).

On top of attacking Watson in a most misogynist manner, he does it to ophelia benson, too!  Screams in his title “HAHAHA DISREGARD THAT, ORWELLPHIA SUCKS COCKS! ”  Also calls her “wicked bitch of the west.”

Oh yes? So I looked it up, and found this. 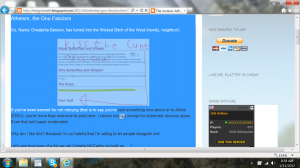