You know I had to start my Pokébiology 101 series with the most famously scientifically inaccurate part of Pokémon: evolution.

In the Pokémon world, “evolution” means something different from what you might have learned in your biology classes. …Well, what you should have learned in your biology classes, assuming the religious right failed to push their agenda into your science classroom. Pokémon evolution is when a Pokémon transforms into a different looking creature once some criterion is met. Most often this means reaching a certain level (levels increase as you gain experience, experience comes from participating in battles). Some Pokémon evolve under weirder circumstances like being exposed to a particular item, being traded to another player, reaching a certain level of happiness, and so on.

This is not evolution. This is metamorphosis.

What’s the difference? Why are Pokémon actually metamorphosing, and not evolving? They both imply some sort of change is taking place, which is why the terms are so easily confused. But there’s a major difference in when and where that change happens:

What would be a hypothetical example of actual evolution in the Pokémon world? Let’s say we’ve stumbled upon a population of Venusaurs in some jungle untouched by Pokémon trainers. Most  Venusaurs have pink flowers, but a rare individual has a gold flower because of a mutation. In case you’re wondering, this alternative color scheme exists in-game and is known as a “shiny,” and shiny Pokémon are incredibly rare. Like, “I’ve probably played 1000 cumulative hours of Pokémon games and I only found one shiny Sentret a decade ago” rare. 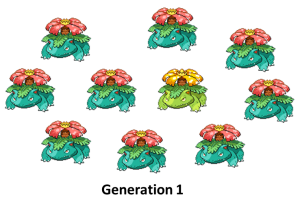 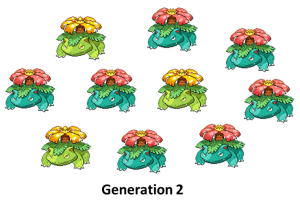 If we’re still around to observe this population many generations later, it may look like this: 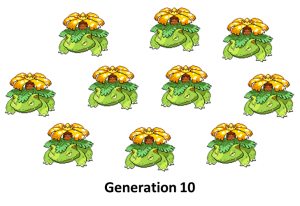 But back to metamorphosis. The common caterpillar example is linear: a caterpillar makes a cocoon and becomes a butterfly. But not all Pokémon have a set fate. I give you the most enigmatic example, Eevee. 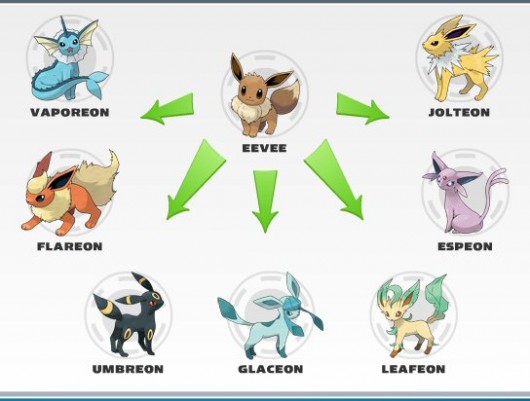 Eevee is special in the world of Pokémon because it has the largest number of ways it can evolve depending on your actions. Want a Flareon? Give Eevee a Fire Stone. Espeon? Make Eevee very happy and level up during the morning or day. Leafeon? Level up while near a mossy rock.

It seems like this couldn’t possibly exist within the confines of our natural world, right? How does an Eevee have the ability to metamorphose into such different creatures just from what its exposed to in the environment? How can a Vaporeon, Jolteon, Flareon, Espeon, Umbreon, Glaceon, and Leafeon all have the same genome as their starting Eevee, but such different traits?

Not to erode Eevee’s specialness, but this happens right here on Earth.

This is known as polyphenism: when multiple discrete phenotypes (a set of observable characteristics) can come from the same genetic background because of differences in the environment. The most common example is different castes in bees. You may know that within a hive, one female gets to be the queen bee, and the other females are worker bees. A queen bee is made by feeding a larvae what’s known as “royal jelly,” which contains chemicals that alter the larvae’s development. If that larvae has a twin sister that didn’t get a special meal, sis will grow up to be a worker. They’re genetically identical, but very different thanks to their environment.

The only thing distinguishing bees from Eevees are the number of choices in development. 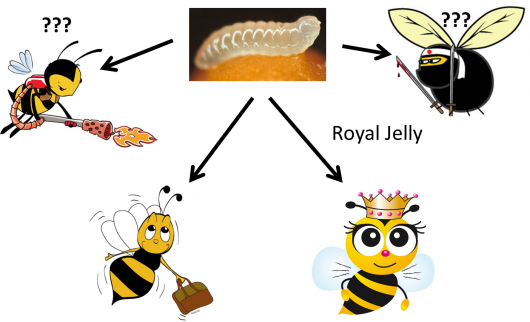 In which I speculate on what would happen if you gave a bee a Fire Stone or Macho Brace.

It will forever irritate me that the game designers chose the term “evolution” instead of a totally accurate, also cool-sounding alternative word. My best guess is that “Bulbasaur is metamorphosing” took up too many pixels, so “evolving” won out. Sadly, this kind of sloppy terminology can cause a lot of misconceptions about what evolution really means. But hopefully now that you’ve learned some Pokébiology, you’re less confused. 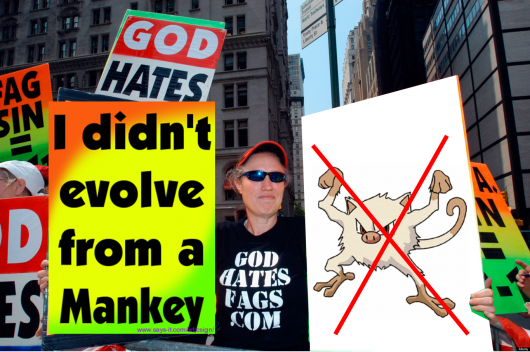 How about we sell the Vatican instead? » « Since I didn’t watch the Super Bowl…