Here are four GLBT news stories to warm your heart:

An iconic kiss – take that, DADT:

“Petty Officer 2nd Class Marissa Gaeta, left, kisses her girlfriend of two years, Petty Officer 3rd Class Citlalic Snell at Joint Expeditionary Base Little Creek in Virginia Beach, Va., Wednesday, Dec. 22, 2011 after Gaeta’s ship returned from 80 days at sea. It ís a time-honored tradition at Navy homecomings – one lucky sailor is chosen to be first off the ship for the long-awaited kiss with a loved one. On Wednesday, for the first time, the happily reunited couple was gay.”

This is how strangers are reacting to public gay marriages: 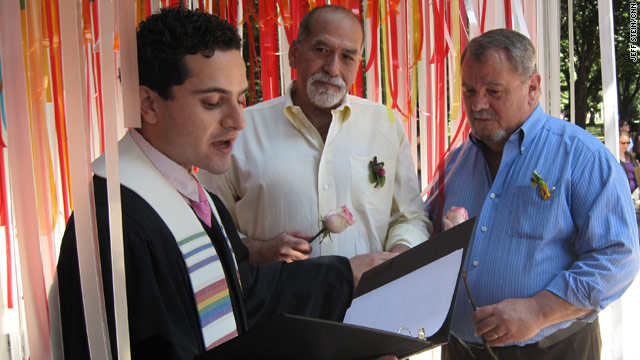 Twenty-four gay and lesbian couples were wed Saturday under two “pop-up” chapels designed to celebrate the first full weekend of same-sex marriage in New York. With every “I do,” jubilant whoops and cheers burst from the crowd, a mix of friends, family and passers-by. The weddings, although held adjacent to the commotion of New York City’s Columbus Circle, felt comfortably ensconced in Central Park. The event’s organizers reported no protests or disturbances throughout the day.

And this warms my way in a giddy, sticking it to the hypocrites way:

​The gay and lesbian community of Minnesota has issued a letter of apology to recently resigned Senate Majority Leader Amy Koch for ruining the institution of marriage and causing her to stray from her husband and engage in an “inappropriate relationship.”

“On behalf of all gays and lesbians living in Minnesota, I would like to wholeheartedly apologize for our community’s successful efforts to threaten your traditional marriage,” reads the letter from John Medeiros. “We apologize that our selfish requests to marry those we love has cheapened and degraded traditional marriage so much that we caused you to stray from your own holy union for something more cheap and tawdry.”

The letter comes on the heels of Koch’s own apology, released yesterday, in which she expressed her deep regret for “engaging in a relationship with a Senate staffer.” Although the letter did not specify the identity of the other participant in the “inappropriate relationship,” it is widely rumored to be former communications chief Michael Brodkorb, who lost several positions with the GOP in the wake of the scandal.

You can see all 60 here, but here are some of my favorites:

I’m not going to lie, the older gay couples fill me with the most joy. I just want to hug them and tell them how happy I am that they made it through all the years of crap to finally see this day. I can’t wait for the day where the whole country looks back and says, “Wow, can you remember when bigots used to keep gay people from marrying?”

A young child reacts to meeting his first gay couple:

“So that means you love each other!” Yes, yes exactly. You, child, have an understanding that exceeds most right wing politicians.

Amazing how people aren’t bigoted until they’re taught to be bigoted.

The good kind of tears.

I was holding it together until Woody appeared. Is that silly?

This commercial about the It Gets Better Project just aired as a commercial during Glee. I can only imagine how many kids it reached. Saving even just one life makes it worth it.

I had a blast at the Secular Student Alliance Southern California leadership summit. I don’t exactly feel like writing a big summary at the moment, but I wanted to rub it in that I saw a bunch of awesome speakers and just got out of a hot tub. I think this photo pretty much summarizes my happiness: 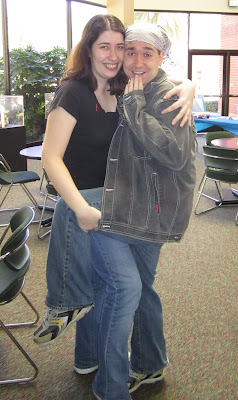 I heart everyone from the SSA.

Boobquake is still making an impact months later*. You may remember that I sold some boobquake t-shirts in my store promising the royalties would go to charity. The total royalities earned from boobquake shirts was $621.87, and my April volume bonus thanks to the shirts was $369.53. That’s a total of $991.40 raised from Boobquake! Well, the donations have finally been made.

$500 has been donated to the Red Cross for disaster relief, and

$500 has been donated to the James Randi Educational Foundation

The delay in donation paid off, since the JREF is having their Season of Reason right now. What does that mean? An anonymous donor is matching all donations, meaning Boobquake’s contribution to the JREF is effectively doubled to $1,000!

I know that’s still not much for a big organization, but it’s equivalent to one of my paychecks, so I feel like quite the philanthropist right now. But really, the money wasn’t mine – I should be thanking all of you who bought merchandise in order to support these organizations. So, thank you!

We may still debate if boobquake did any good in terms of politics, religion, or women’s rights, but it’s certainly not debateable that it raised money for two wonderful causes.

*The months later part is mostly due to me moving twice after April, first to my parent’s house and then to Seattle. This resulted in Zazzle checks (which are already notoriously delayed thanks to waits in processing) to get returned to sender for a while as they tried to find me. I then realized I could just get paid through PayPal, so that solved that issue. …But yeah, it’s also partially due to procrastination. Oh well, I guess it worked out, since we ended up having a matching donor!

Graeme Taylor is my new favorite person in the world. He’s an openly gay 14-year old who eloquently defended Jay McDowell, a teacher who had been recently suspended without pay at his school in Howell, Michigan. What horrible thing did McDowell do that warranted this suspension? He told a student to take off a confederate flag belt buckle and removed two students for making anti-gay remarks.

You can hear Taylor’s speech to the school board here:

Videos like this make me simultaneously proud and disappointed. Proud that young people can so eloquently understand and defend the rights of minorities…and disappointed that so-called adults still don’t get it.

I thought it couldn’t get any better than having a piece on me. I was wrong. 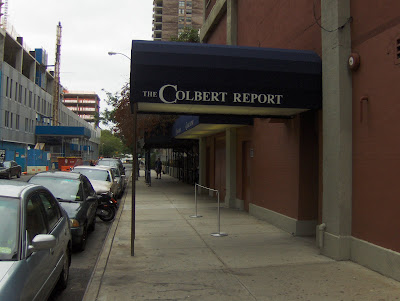 I got in line for the show with Nikki (my now Favorite Blog Reader for giving me a ticket) at 4:30. We were assigned tickets, and I was number 42. Yes, I think it was fate: 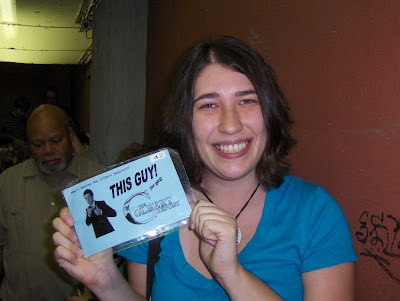 We were let into the lobby at 5:30, where we waited until they were ready to seat us. Thankfully they had old Colbert clips playing so it wasn’t totally boring. Around 6:30 they seated us, and I had a great seat. You can see me when they pan to the audience – I’m in the middle section five rows back wearing a bright blue shirt. Unfortunately we weren’t allowed to take any photos or have him autograph anything.

Before the show they had a stand up comedian as a warm up act, letting us know when to go extra crazy and to warm us up. Colbert then ran out, and we were able to do a Q&A session with him out of character, which was amazing. We were told to ask him anything random, or even comment on something if we didn’t have a question. Or as he said, “Now’s your chance to ask me something so I can redeem myself.”

After he called on a couple people, he called on me. I usually hate people who do self serving comments instead of asking a question, but I thought, fuck it. How often do I get to speak to Stephen Colbert? This is how it went (though I probably stammered through it):

Me: I just wanted to thank you for the piece you did on boobquake in April –
Colbert: I’m afraid I don’t quite remember what that was. …Wait, was that you?
Me: Yes, that was me! And having you talk about me on your show was about the most awesome thing ever.
Colbert: Remind me what it was about.
Me: An Iranian cleric said immodestly dressed women cause earthquakes, and I said we should test that scientifically. And it kind of took off like crazy, well, I guess which is why it was on your show.
Colbert: And what did you wear that day?
Me: Uh, oh, something similar to this I guess.
Colbert: Now, now, young lady, I think it was a little less than that. You do look smoking hot though.
Me: …*die*
Colbert: And wasn’t there an earthquake that day?
Me: Yes, in Taiwan. But it wasn’t statistically significant!
Colbert: *pauses and smiles* Don’t underestimate yourself, you look good.

And then he moved on. And the gal sitting next to me said she loved boobquake.

The show itself was absolutely hilarious. I’m sure you can look on their website, but it included the “Ground Zero Mosque,” Iranian politics, social media, religious jokes, and people riding dinosaurs. It was like it was tailor made for me.

On the way out another young woman came up to me and said she loved boobquake. What she said pretty much summarizes how I feel:

Her: That’s so awesome having Stephen Colbert do a piece on you. Can it get any better than that?
Me: I used to think not, but yes, it can. Stephen Colbert just called me smoking hot.
Her: …Very true.

I can think of no better end to this New York vacation. I just can’t make stuff like this up (Nikki can confirm). Now if you’ll excuse me, I’m going to go die of glee.

…Yeah, I have nothing else to say. Just wanted to rub it in. I get to be evil like that every once in a while – it’s in the Universal Blogger’s Rules or something.

A zillion thanks to Nikki for lending me her extra ticket, thus earning her the title of Most Awesome Blog Reader Ever.

I did leave out one highlight from my St. Louis trip because it was so awesome that it deserved a post of its own. I received what could very well be the Most Hilariously Creative Atheist Gift Ever: 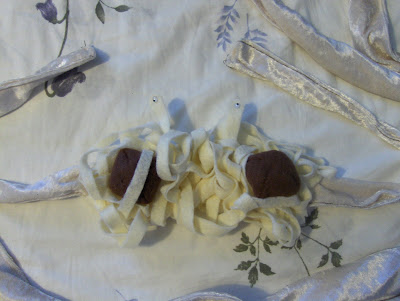 Me: *pulling gift out of bag* Oh, cute, a Flying Spaghetti Monster! …*thinking* Wait, what is it attached to? Is this a blind fold? …There’s more in the bag… 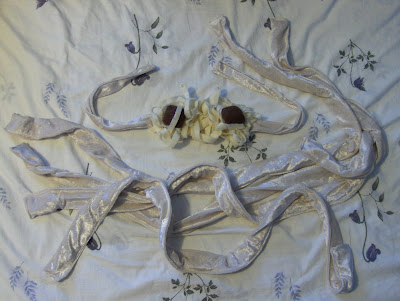 Me: …*look of confusion*
Everyone else: *looks of extreme amusement*

Seriously, I’m not sure if this level of awesomeness can be topped. The St. Louis Skeptics have set the bar pretty damn high when it comes to creative godless gifts. I’m afraid to challenge future groups I visit to try and top this… but I’m not going to discourage them either.

Thanks for the awesome gift, St. Louis Skeptics, especially Claire, who I believe was the one who made it (if I’m wrong, please correct me! All your names started blurring together by 3am!). I think this is definitely a untapped niche market. Get cracking on that Atheist Sex Toy Etsy Shop!