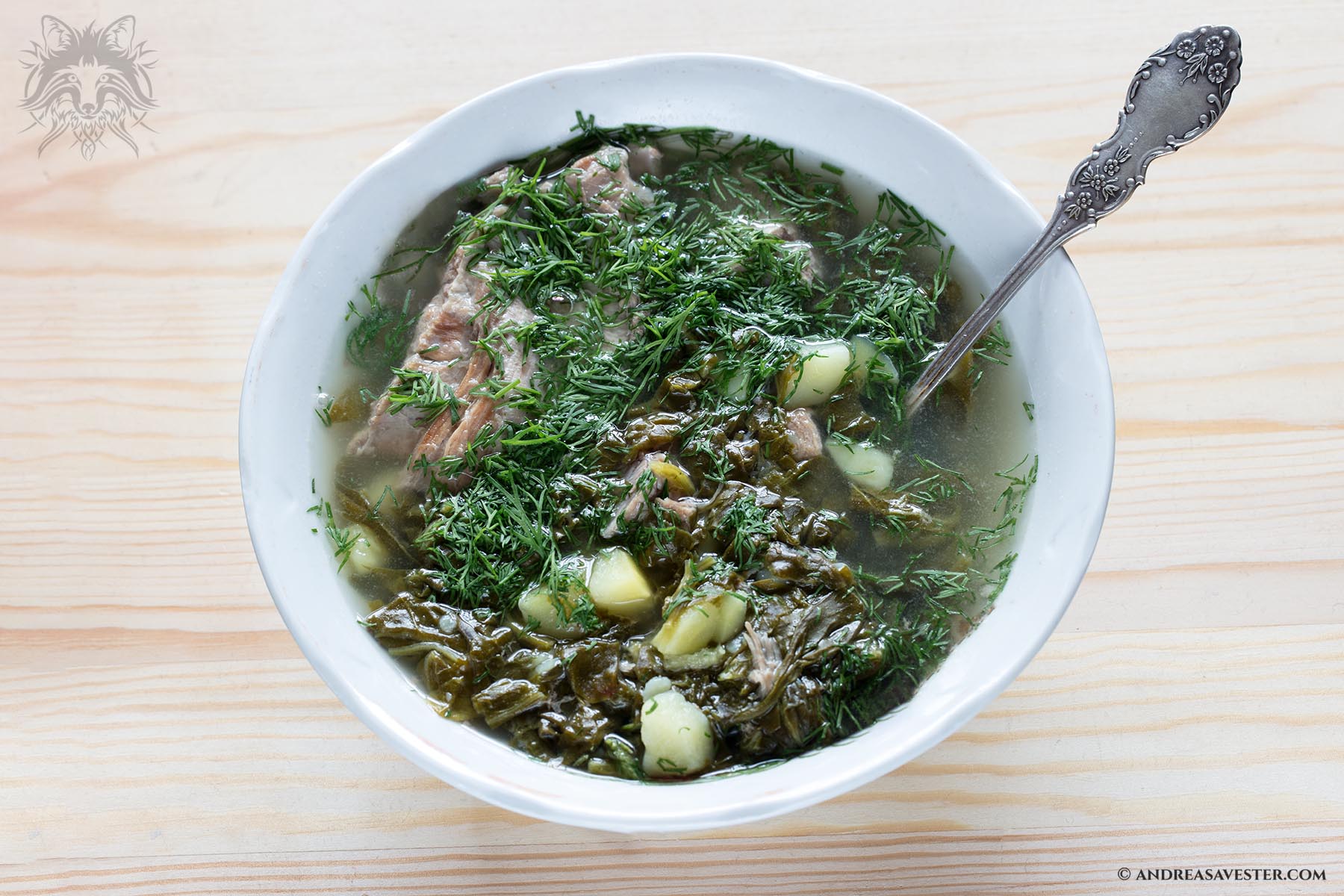 I prefer to make soups from the cheapest parts of an animal, because this way I can save money on food and reduce demand for the standard cuts preferred by everybody else. By the way, in my opinion pig feet and turkey necks are especially tasty. 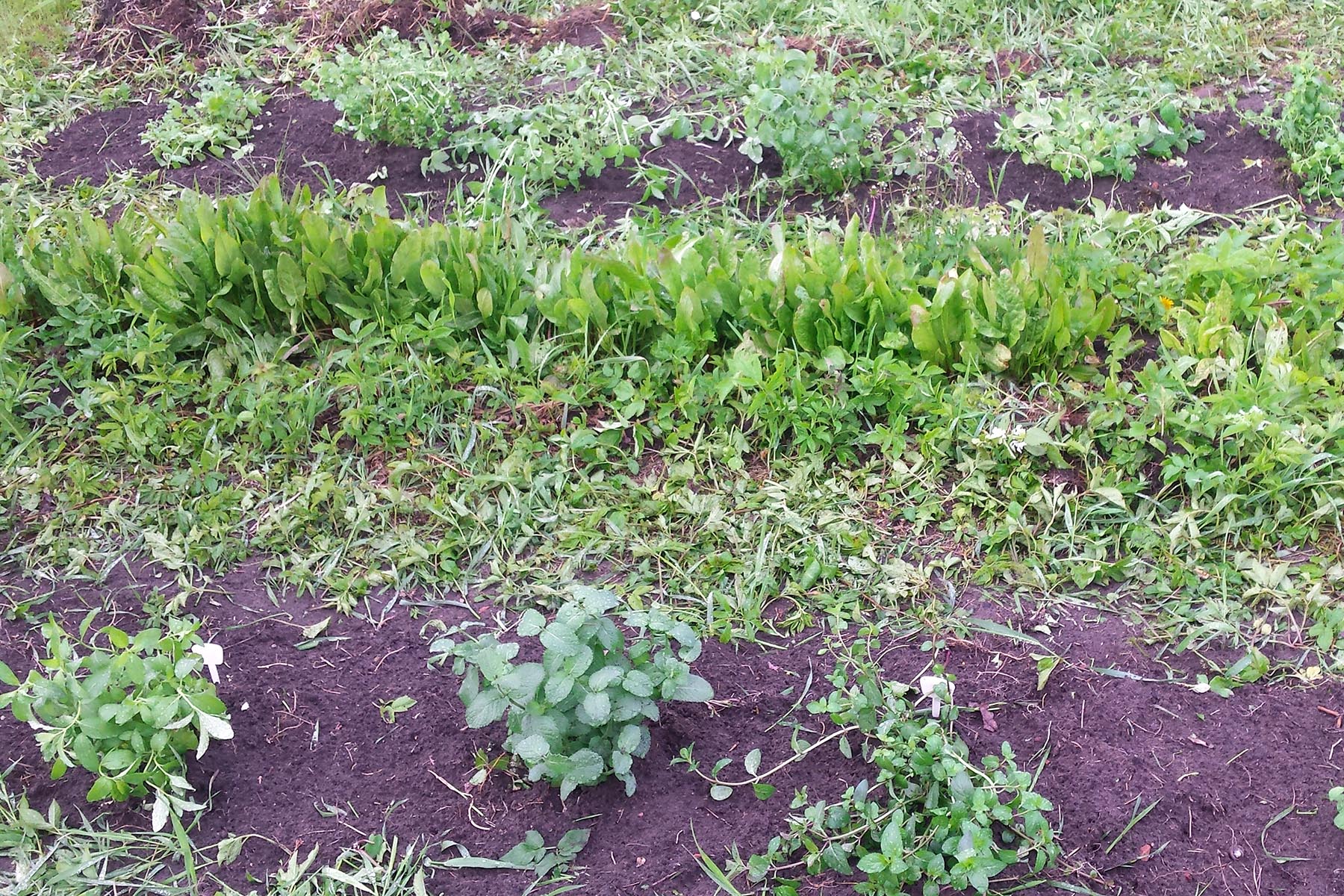 Spot the sorrels! They are hiding in there, somewhere between all the weeds, grass, and peppermint plants.

Last year I put some sorrel seeds in the ground on my boyfriend’s real estate, which I have appropriated for my food production needs. Now that the spring has arrived, I have sorrels. They are a little sour, but I absolutely love the taste. They taste great eaten fresh or in a soup. 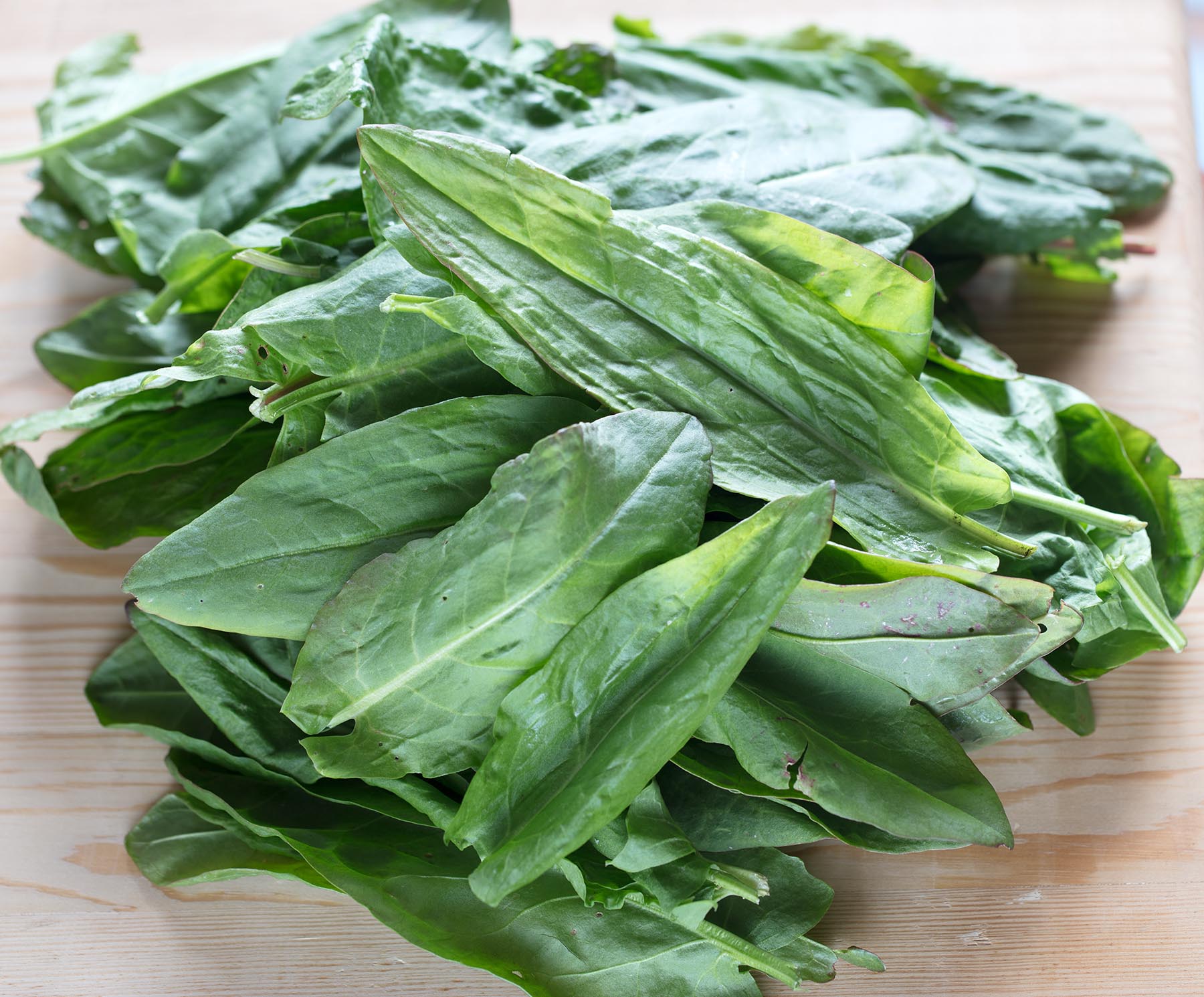 Step 1: Make the broth. Any bones will do. I usually pick beef bones, but I have also made stock from all kinds of other bones and meats. I prefer to buy bones that have some meat around them. Place bones in a large pot. Pour water until bones are covered. Bring to a boil, then reduce to a steady simmer. If you want, skim the foam once it appears. Doing so is not obligatory, there’s nothing inherently bad about this foam except that it can make the liquid cloudy. Cover the pot and let it simmer until meat becomes tender and easily falls off from the bones. Cooking time will depend on what bones/meat you have. It depends on the species of the animal, which bones you used, even the age of the animal. For example, cooking the bones of an old cow will take more time than those of a younger cow. In general, it will probably take between one to three hours. If too much water evaporates while the pot is simmering, add more water. 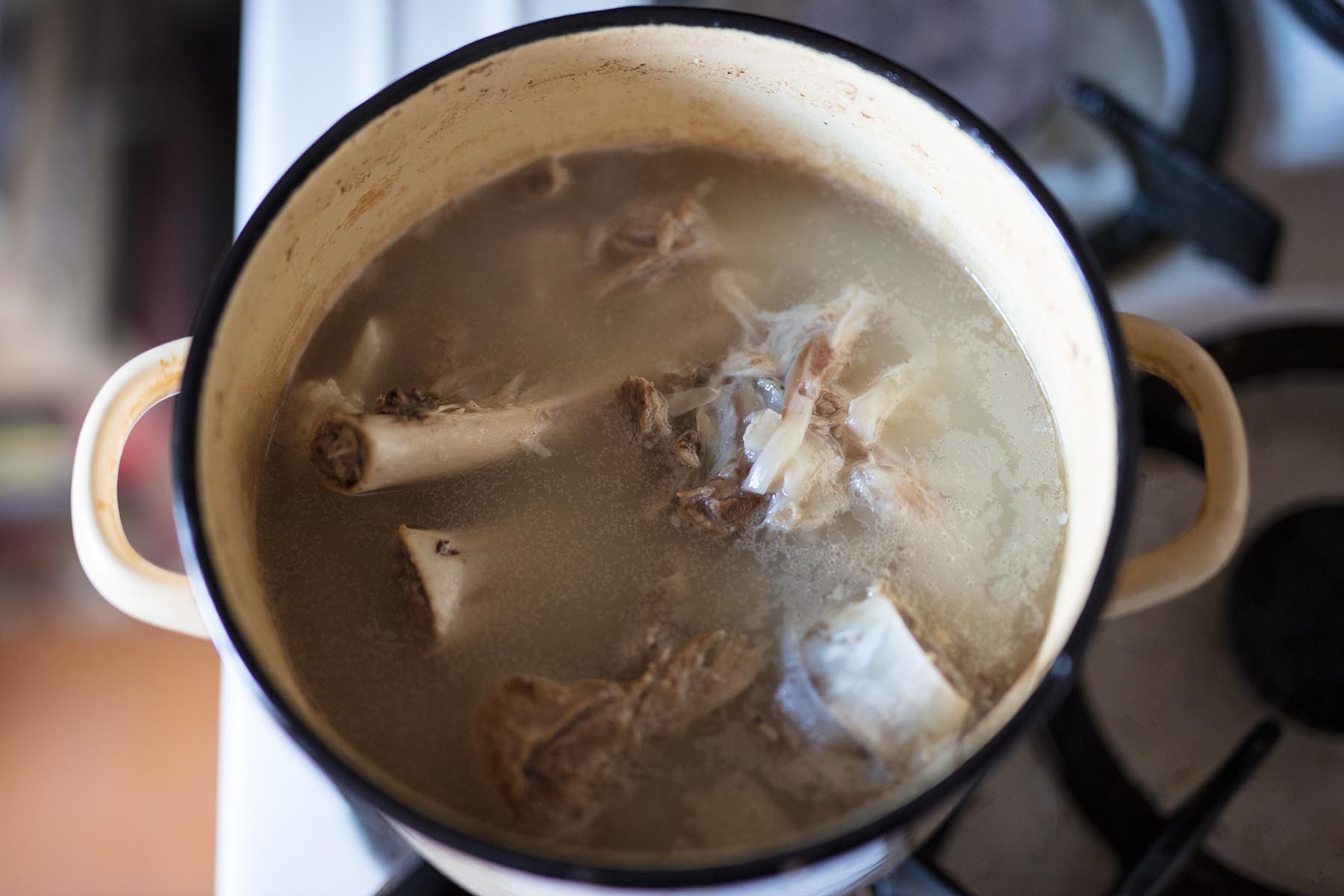 Bones and meat in a pot of water. Whenever too much water evaporates, add more.

Step 2: Remove the bones and meat from the pot. When they become cold enough to touch without burning your hands, separate the meat from the bones. Bone marrow, cartilage, and meat are the edible parts. You can eat them as it, use for some other recipe, or later put back in the finished sorrel soup. 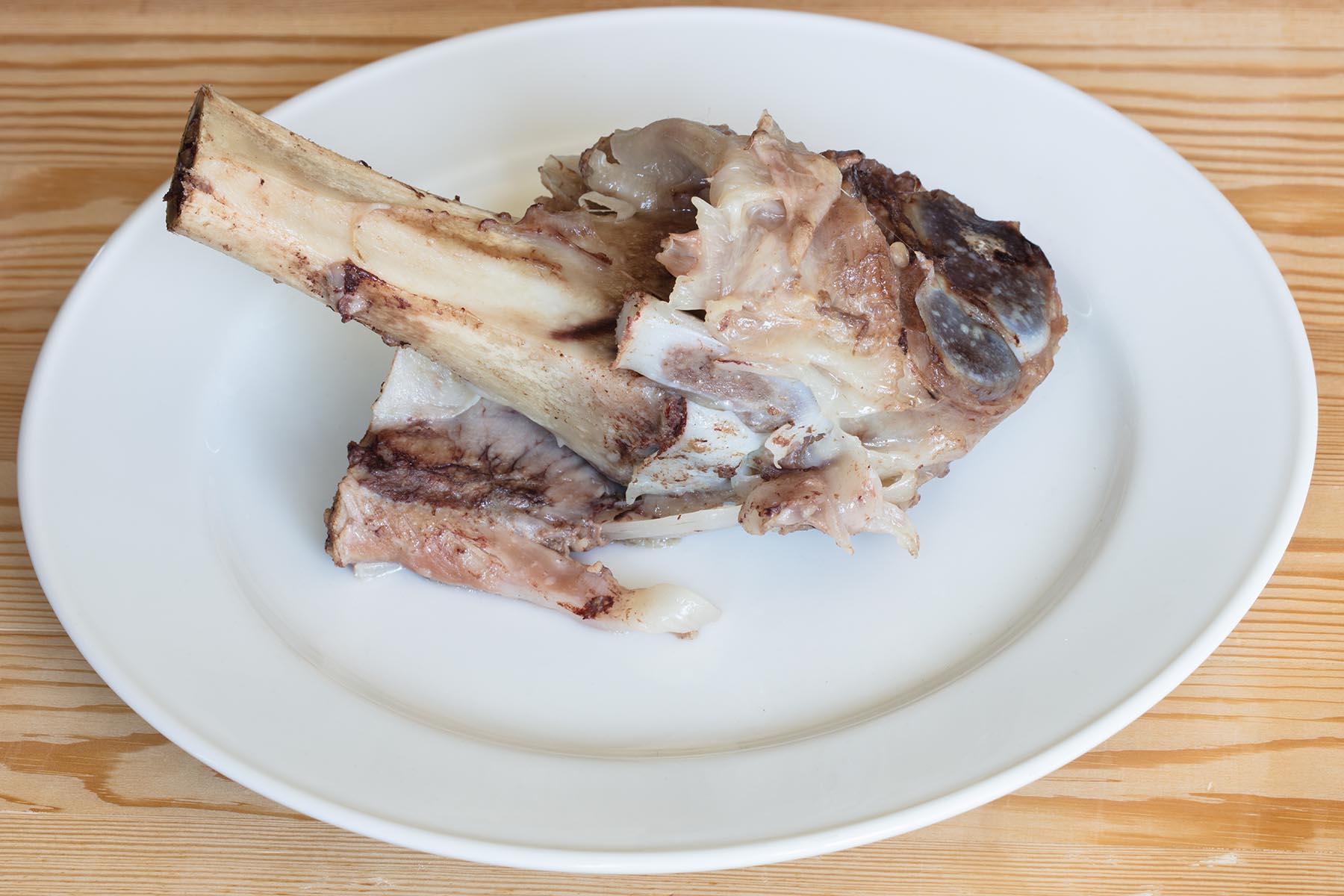 What’s for dinner? Beef. What? You expected to see a steak? Nope. On this plate, everything that can be chewed is edible.

Step 3: Peel and cut the potatoes. Simmer them for about 15 to 20 minutes in the liquid in which you previously cooked the bones.

Step 4: Wash and chop sorrel leaves. (Chopped sorrel leaves have a specific texture in a soup. Personally, I love it. Some other people don’t like it. In such case it is also possible to use a blender in order to turn sorrel leaves into a uniform paste instead of just chopping them.)

Step 5: Add salt. Unless you already did that while simmering the bones. You can add your chosen seasonings whenever you prefer.

Step 6: Add sorrel leaves to the pot. Wait for approximately one minute until sorrels change their color to a darker and less bright green. Turn off the heat. The soup is done.

For serving: If you wish, add a hard boiled egg, a tablespoon of sour cream, and chopped dill. Also, remember that meat you previously removed from the pot in order to separate it from the bones? Now is the time to put it back in your bowl. Unless you wanted some boiled meat for a different recipe. Of course, you can also instead put back the meat in the whole pot of sorrel soup, but in my family we prefer to keep it separately so that each person can put in their own soup bowl as much meat as they want (some of us like more meat than others).

Sorrel soup is a very common food where I live, and everybody who cooks it has their own favorite variation of it. The best thing about soups is that you can just throw in the pot different ingredients in various proportions, and the result will remain tasty.

Of course, sorrel soup doesn’t have to be made from bone broth. Instead, you can use cured or smoked meat. Or fresh meat from the standard cuts. Or you can make a vegan sorrel soup with some stock that doesn’t include animal products.

Part of sorrel leaves in this recipe can be substituted with spinach or stinging nettle leaves.

Traditionally, the recipe for sorrel soup includes barley groats. I like their taste, but I don’t like that they must be cooked for a very long time, you have to simmer them for about 60 minutes. Thus I skip using them. Instead I sometimes use whole grain barley flakes (they are made the same way as rolled oats). Just put those in water and a few minutes later they will be soft and tasty. Another alternative is grain bran, which can be used identically to barley flakes. I also tend to add a bit of ground flax seeds to various liquid foods like soups. Where I live, flax seeds are among the cheapest sources of protein, hence I add them to various recipes.

You can use also various other vegetables in addition to (or instead of) potatoes. Many people like carrots in their sorrel soup. I once used a romanesco broccoli in a sorrel soup, because that’s what I had at home at that time, and I have a tendency to just throw in soups whatever I have in my kitchen. It tasted great. Depending on what vegetables you use and how finely you cut them, cooking time may vary. 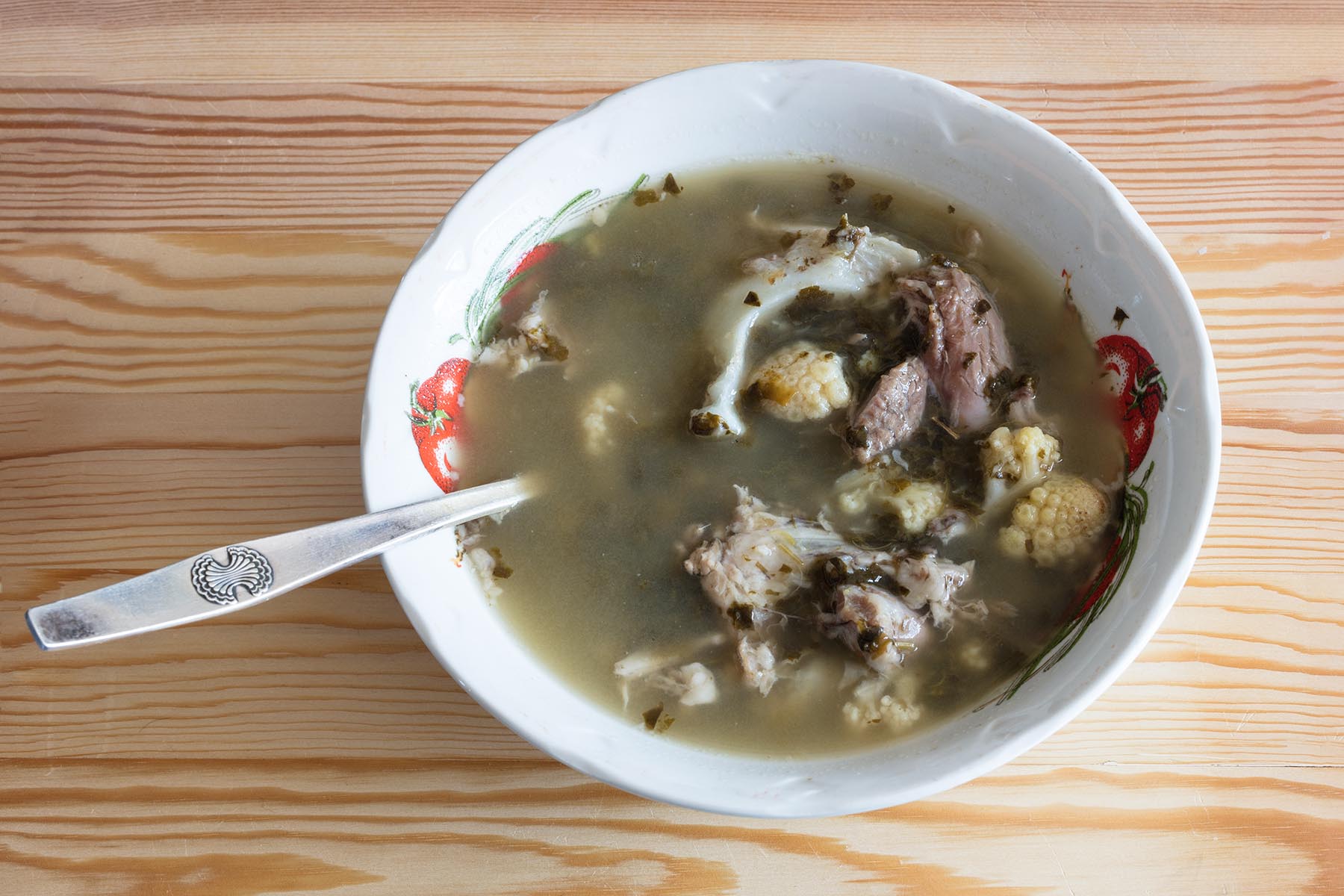 Personally, I like to make foods without any spices. Other people tend to call my dishes bland. I tend to call many of theirs overseasoned. Also, I hate onions, leeks, and chili peppers. In the primary ingredient list I didn’t include any seasonings (except for salt), because I don’t use them. If your preferences differ from mine, use common sense and pick whatever spices you like. 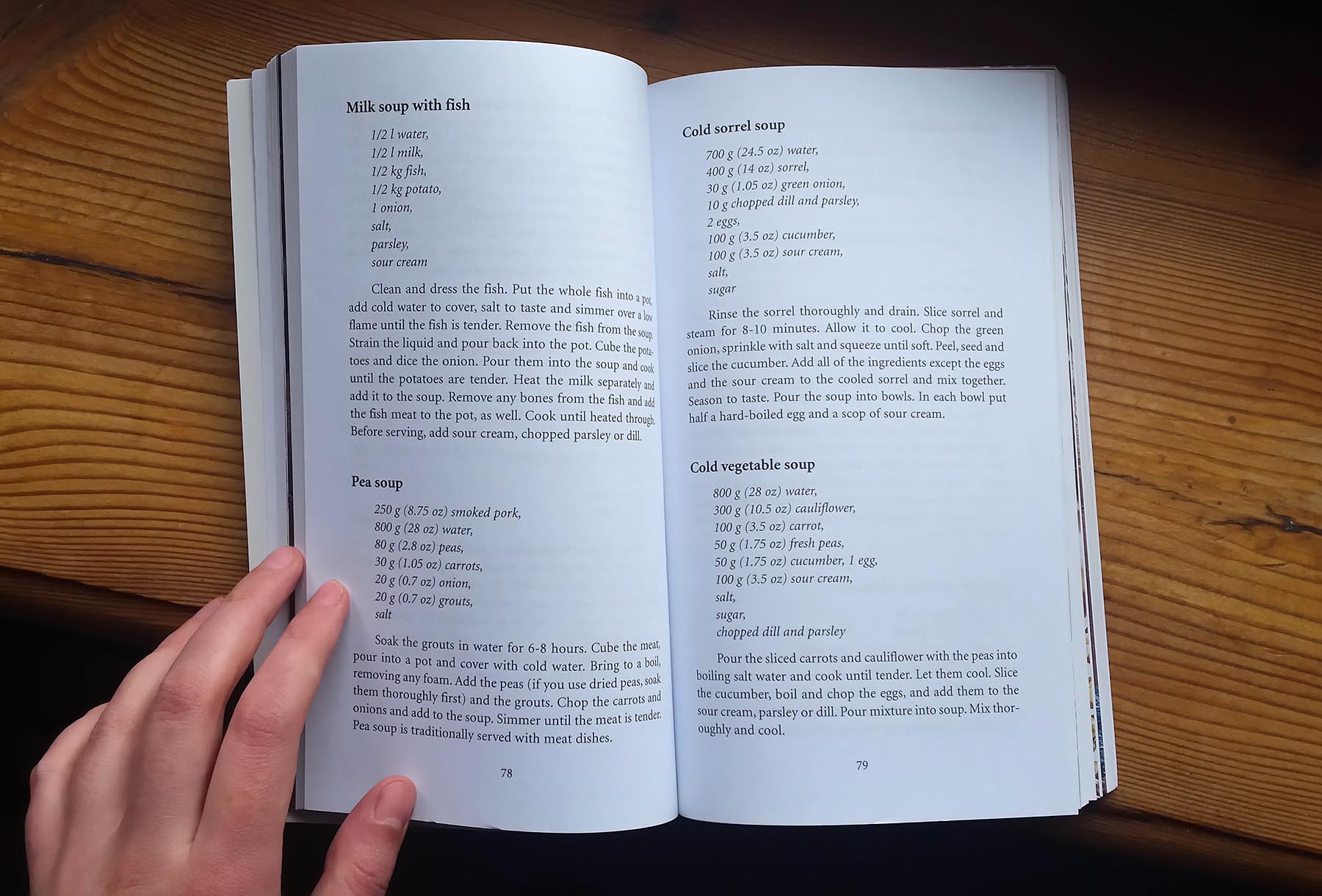 Here is a recipe for a cold sorrel soup. That’s something I have personally never made, in my home cold soups are made from beets. I am pretty certain that in Latvia very few people make sorrel soup like this.

And here are three different recipes for sorrel soup. The text is in Latvian, so Google translate is your friend. If you compare these recipes with mine, you will discover that these three recipes are very different from what I have here, and they also differ from each other.

There are lots of different ways how to make something tasty from sorrels and water.