The idiom “greatest thing since sliced bread” always felt odd for me. I am not a native English speaker; I learned the language when I was already in my teens. And this idiom clashed with the cultural background in which I had grown up. In my opinion, sliced bread is a pretty terrible idea, there’s nothing great about it. When you compare another invention with sliced bread, you are basically saying that this new thing is just as terrible as sliced bread. Here’s the problem: I was raised to not waste food and not spend extra money on packaging and convenience-enhancing processing methods that don’t really save that much time anyway. I mean, sliced bread requires more packaging and it tends to cost a bit more even though for me slicing my own bread only takes a couple of seconds and it is not hard at all.

Firstly, sliced bread must be sold packaged in plastics (and humanity already produces too much plastic waste from packaging). Secondly, at home it must be stored in plastics or else it will dry very quickly. I say “dry,” because good quality bread is supposed to become dry if you fail to eat it in a few days. If bread instead gets covered with mold, then you got ripped off and bought some poor quality loaf of bread. Incidentally, my observation is that sliced bread tends to be poorer quality compared to the whole bread that I prefer to get from small bakeries.

Anyway, if white (either whole grain or refined wheat) bread gets dry, then in Latvian traditional cuisine you use it as an ingredient for meatballs. Here’s how Latvian meatballs (“kotletes”) look like. Ingredients for the recipe are ground meat, eggs, soaked dry wheat bread, and a bit of salt. 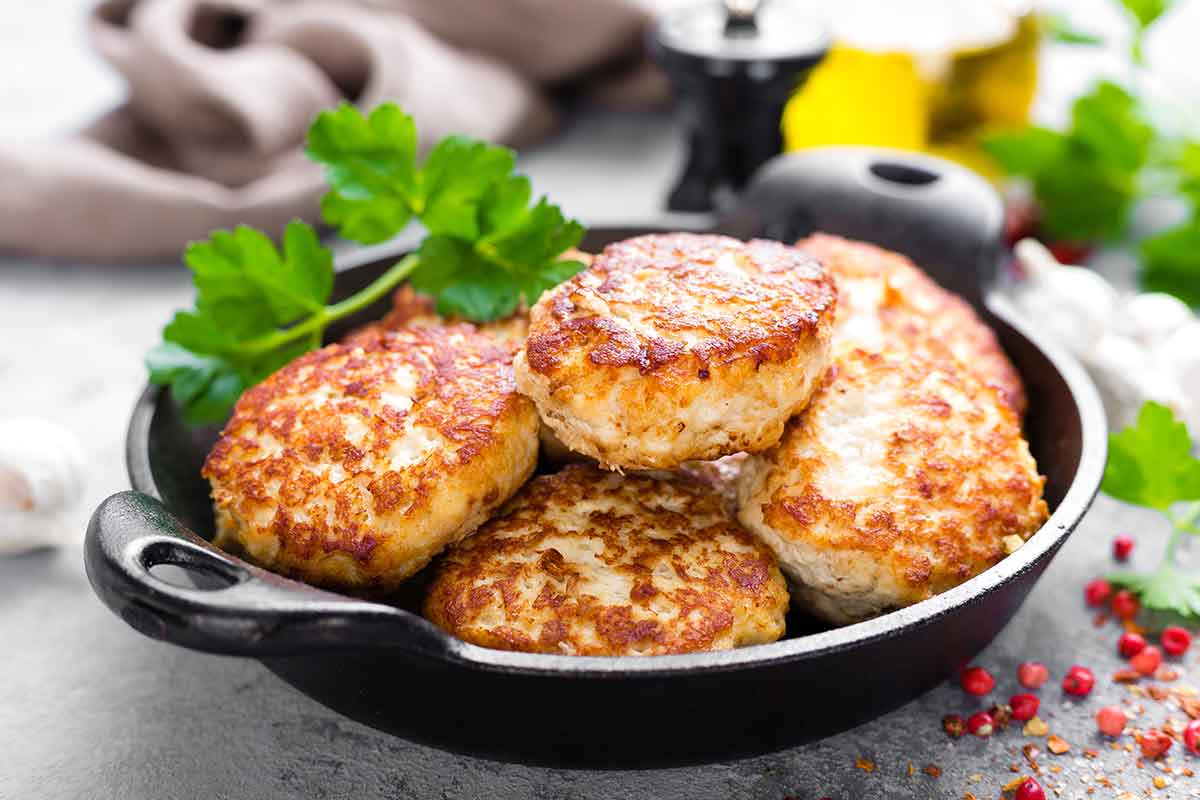 If rye bread gets dry, then you use it for making a bread soup (“maizes zupa” in Latvian). It’s a dessert usually served with whipped cream. You grind the dry rye bread into a powder, mix it with dry fruit like raisins or dried apricots, add some sugar and a few other ingredients and at the end you get a very tasty dessert. In case anybody is interested, here is the recipe. It is in Latvian, but Google translate should do the trick for making it comprehensible. 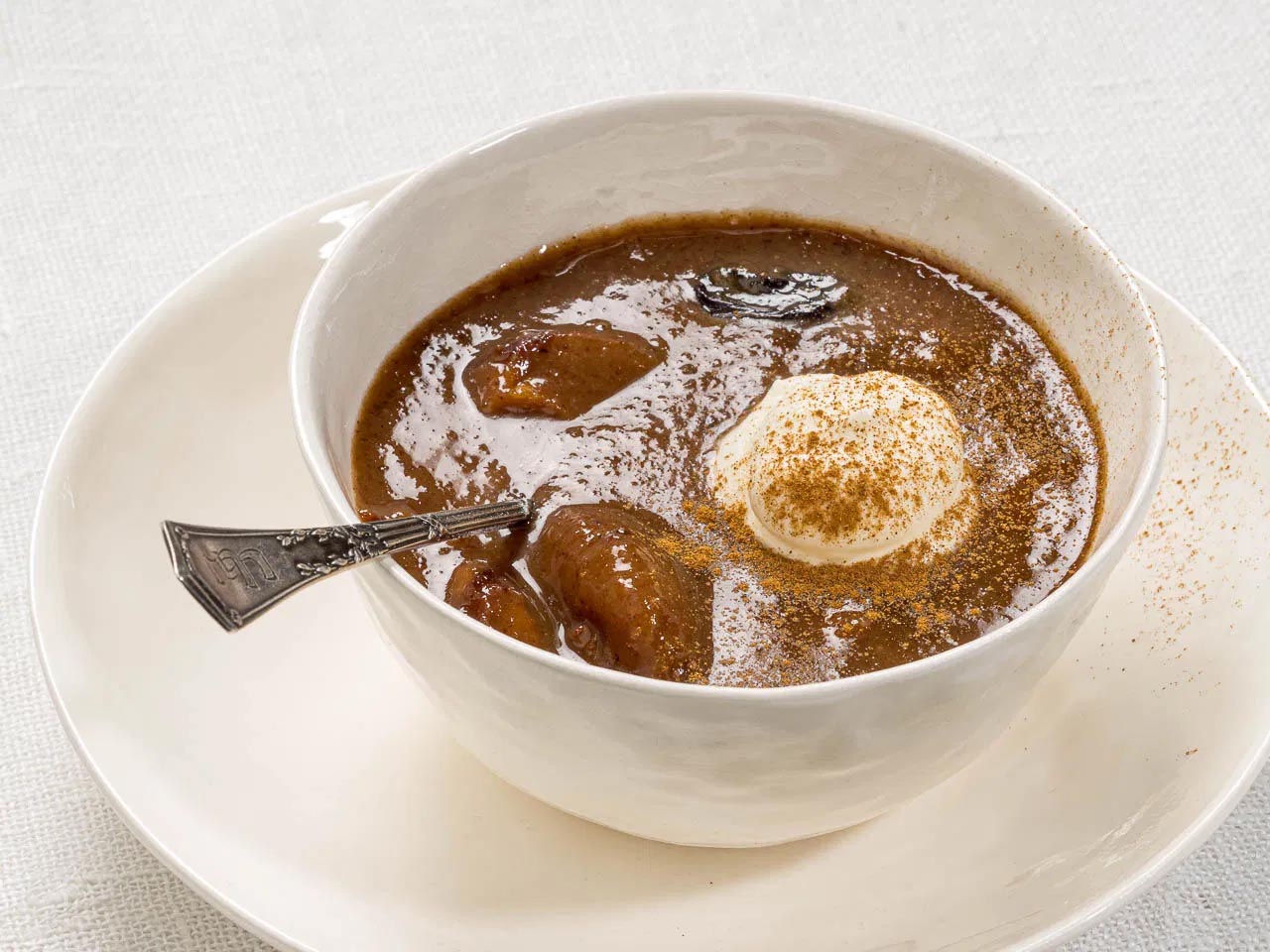 Back when I was a child, my mother bought all the fish we ate whole. Not pre-cut into neat fish fillets, but whole with all the bones and organs. My mom always prepared food so as to waste as little of it as possible. Fish heads, bones, and fins were used to make a fish soup. Here’s how fish soup looks like, my mother’s version was usually made from salmon heads, bones, tail, and fins. 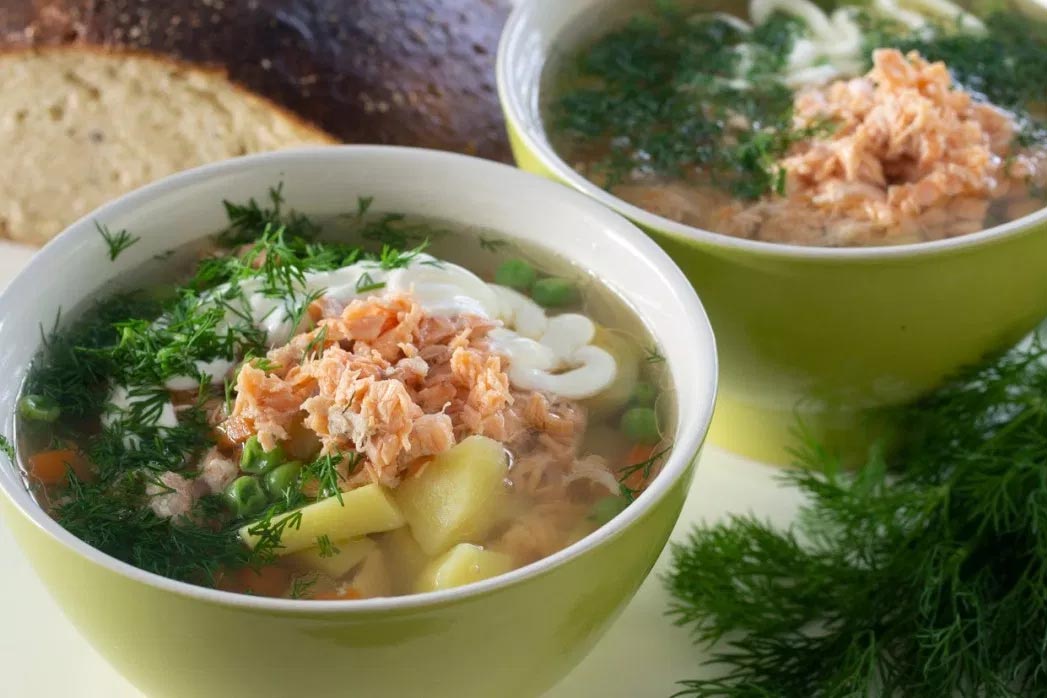 This is how salmon used to be sold in the past. 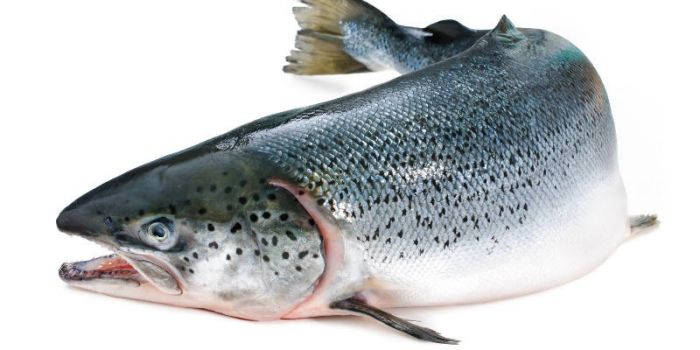 How salmon ought to be sold.

This is how it is often sold nowadays. Sliced and packaged in a hell lot of plastics. 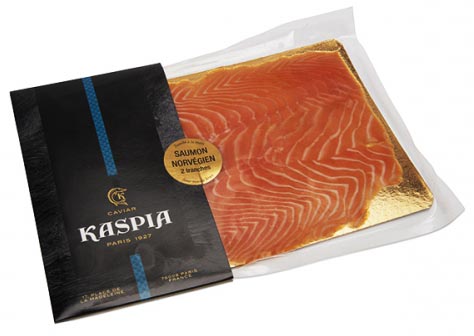 How salmon is sold in supermarkets.

A few Latvian supermarkets still sell whole fish. But those are rare. Most grocery stores sell only pre-cut fish that is packaged in lots of plastics. Moreover, these stores sell only what are considered the most desirable cuts. Fish heads, tails, fins, and bones are not found anywhere in the grocery store at all. Parts of the animal are simply no longer sold for human consumption. Nowadays, the local farmers’ market is pretty much the only place where consumers can still get the ingredients for a fish soup. Well, technically you can also make a fish soup also from the fancy cuts, but really, the recipe works better with fish heads. 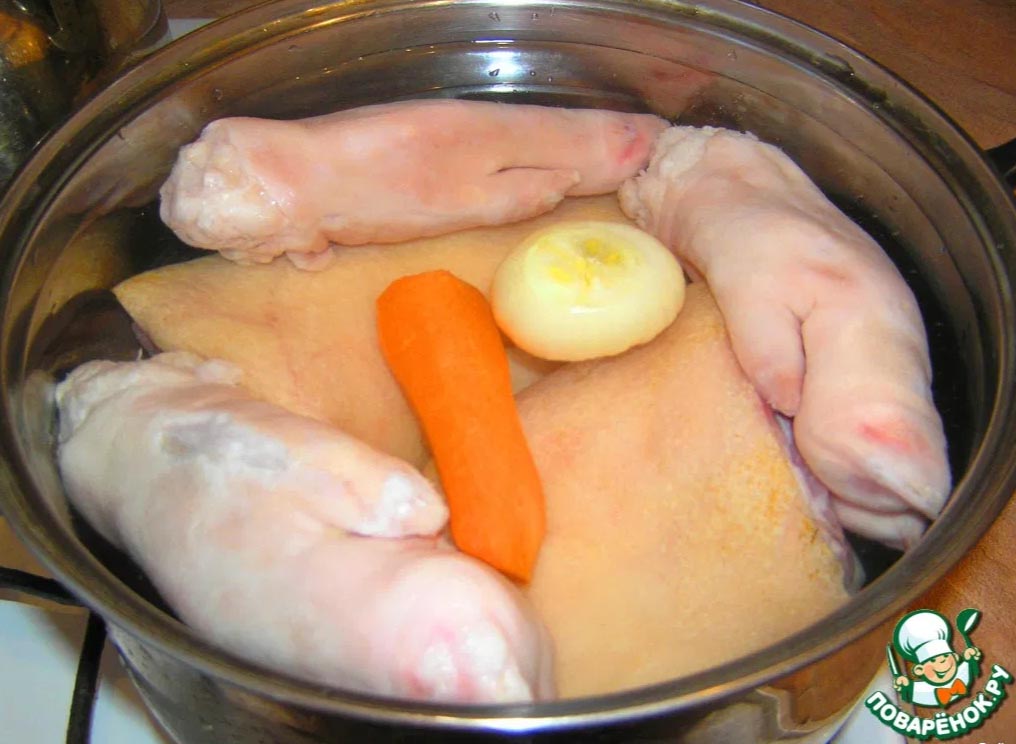 This is food. Perfectly suitable for human consumption.

What do you do with pig feet? You cook and eat them. By the way, I have at least tried various foods made from most organs. My favorite are pig feet. They are really delicious. 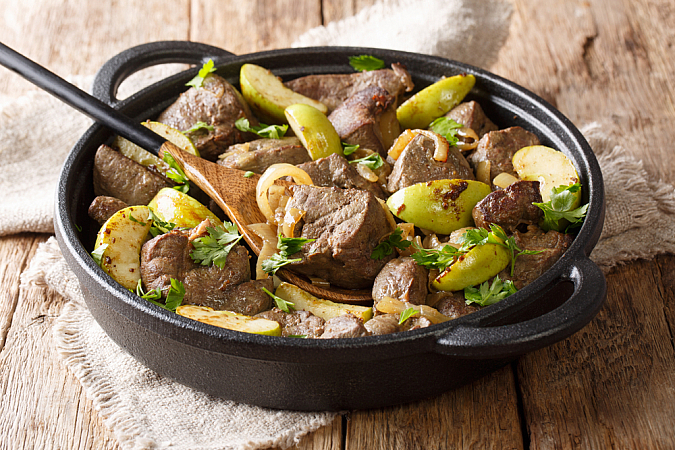 A liver dish with apples. 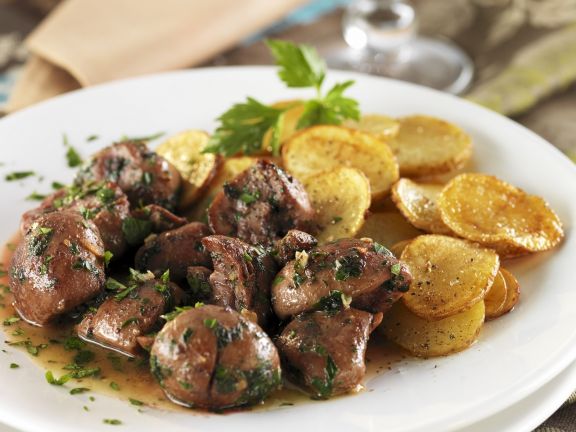 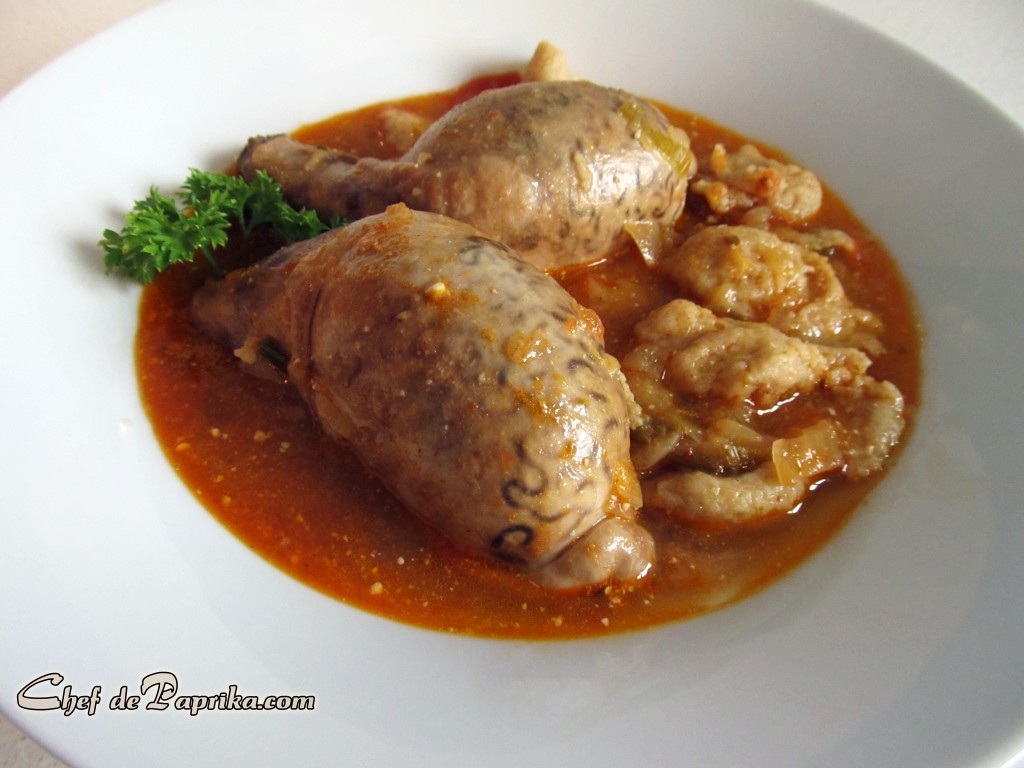 A veal testicle stew. I’d say it looks tasty. The recipe can be found here. 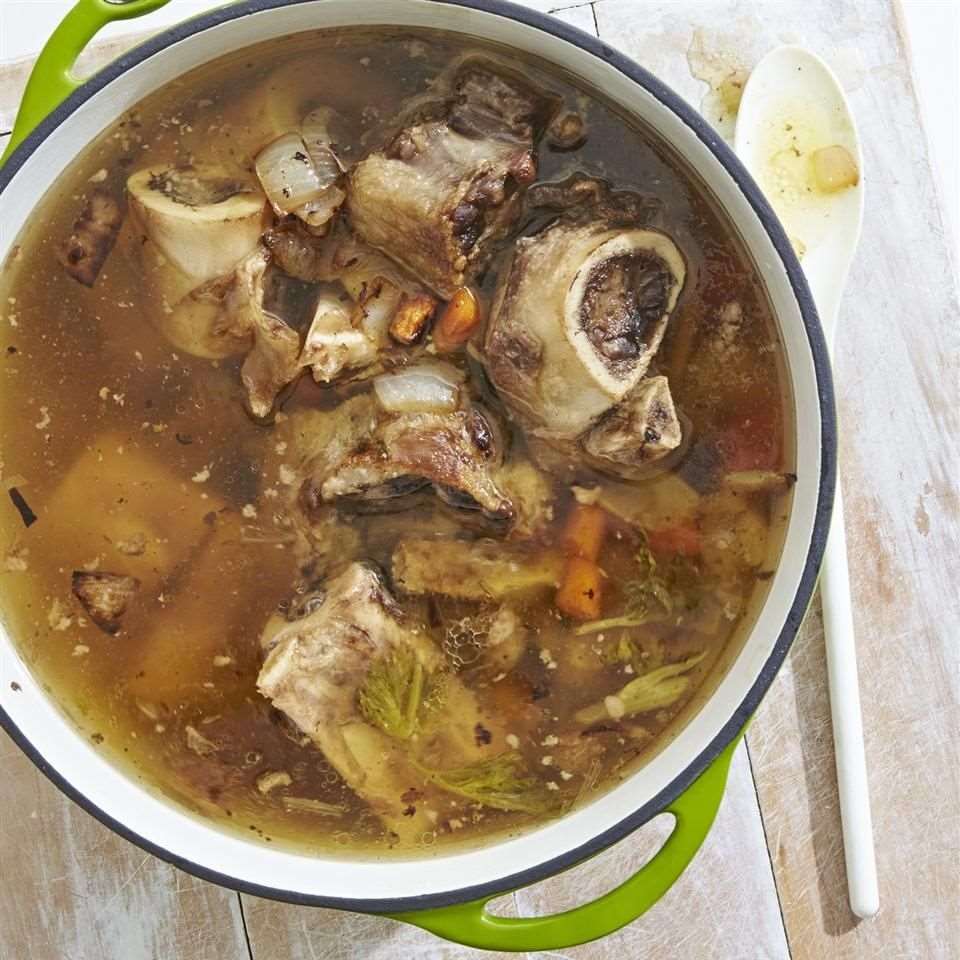 And here’s a food my mother cooks on a regular basis. A soup made from animal bones. Basically, you buy some bones and boil them until the meat becomes tender and can be easily removed from the bones. Next, you add some vegetables to the soup. By the way, bone marrow is also edible. 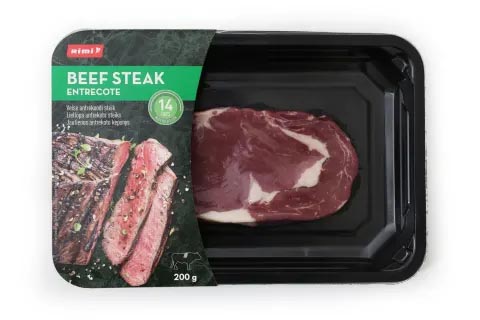 Here is an actual food sold in a Latvian grocery store. In my opinion, this looks ridiculous. A huge amount of plastics around a small piece of meat. 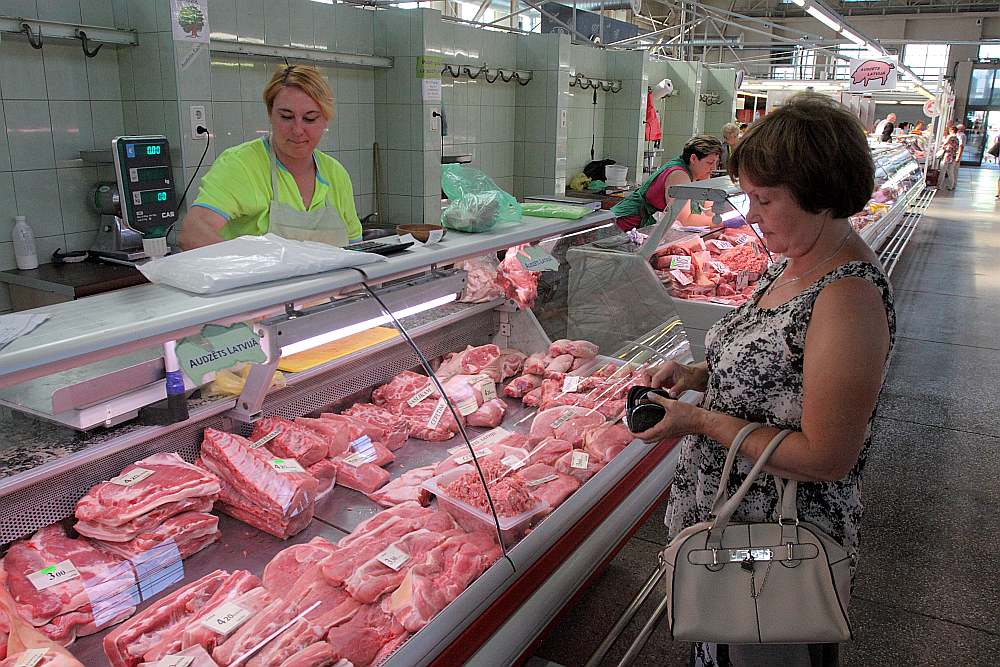 “Centrāltirgus.” A market in Riga.

Personally, I prefer to get my meats from this place. Of course, I am not arguing that I want to be able to buy a whole cow—I’d have no clue what to do with it anyway. But I do want to buy my food without excessive packaging. More importantly, I also want to be able to buy all the pieces of the animal. Not only a steak and some ground beef, but also all the skins, bones, and organs. The pesky problem is that the overwhelming majority of grocery stores simply do not sell any organ meats whatsoever. At all. For example, beef tongue is considered a delicacy in Latvia. Nonetheless, supermarkets do not sell it, because it is a rarity and only a few people know how to cook it and would be interested in purchasing some beef tongues. (By the way, beef tongues are tasty. I am speaking from personal experience.) 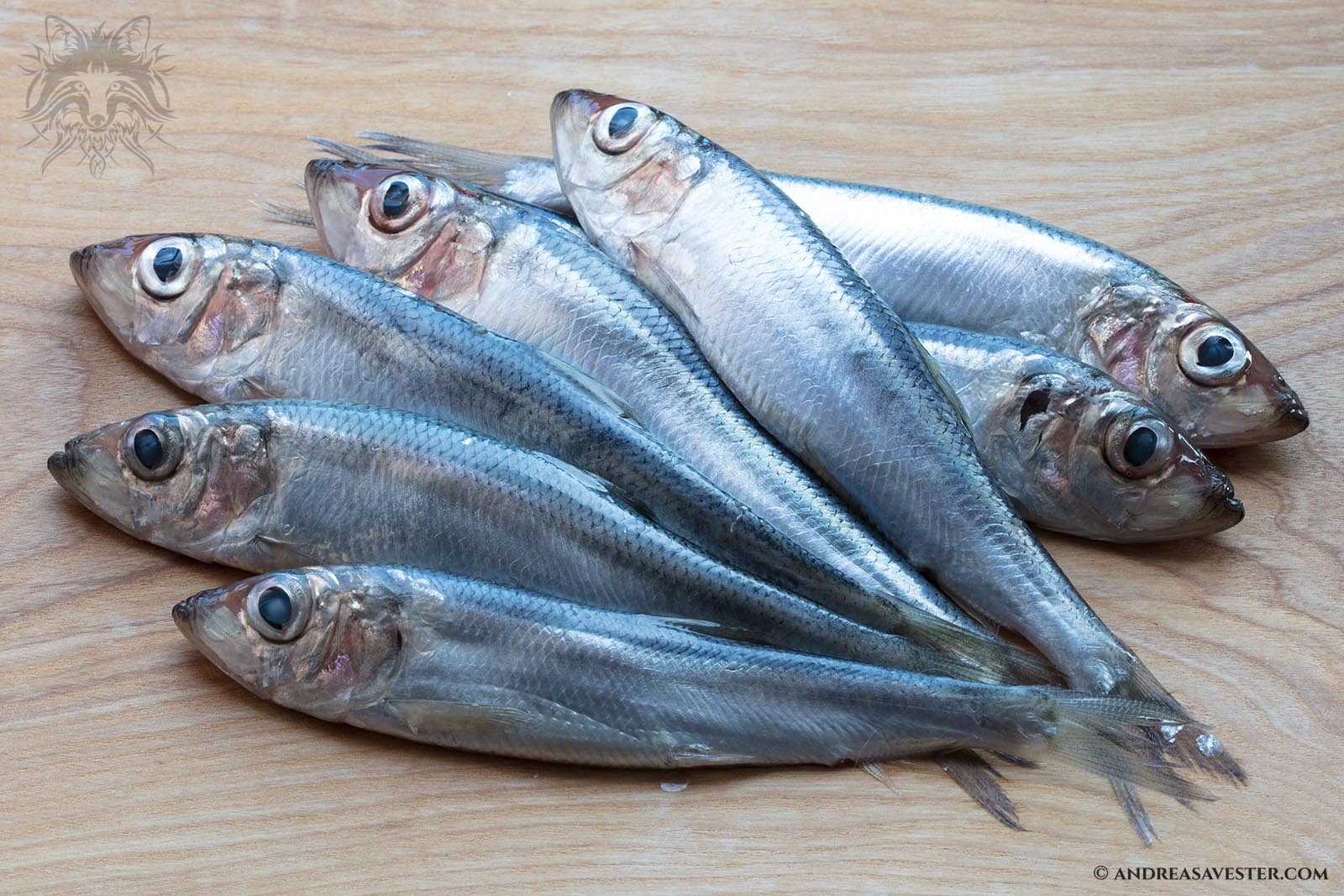 Here’s one of my favorite foods. Baltic herrings. I bought these in the market, because, of course, grocery stores never sell them. These fish are tiny, they are also very cheap (I paid 0.80 euros per kilogram for the ones in this photo). Some people consider them cat food. My dogs consider them dog food. I however, consider them my food, and I am rather annoyed that I can buy these fish only in select few locations. Actually, I know about only one place where I can get these fish—the local farmers’ market. 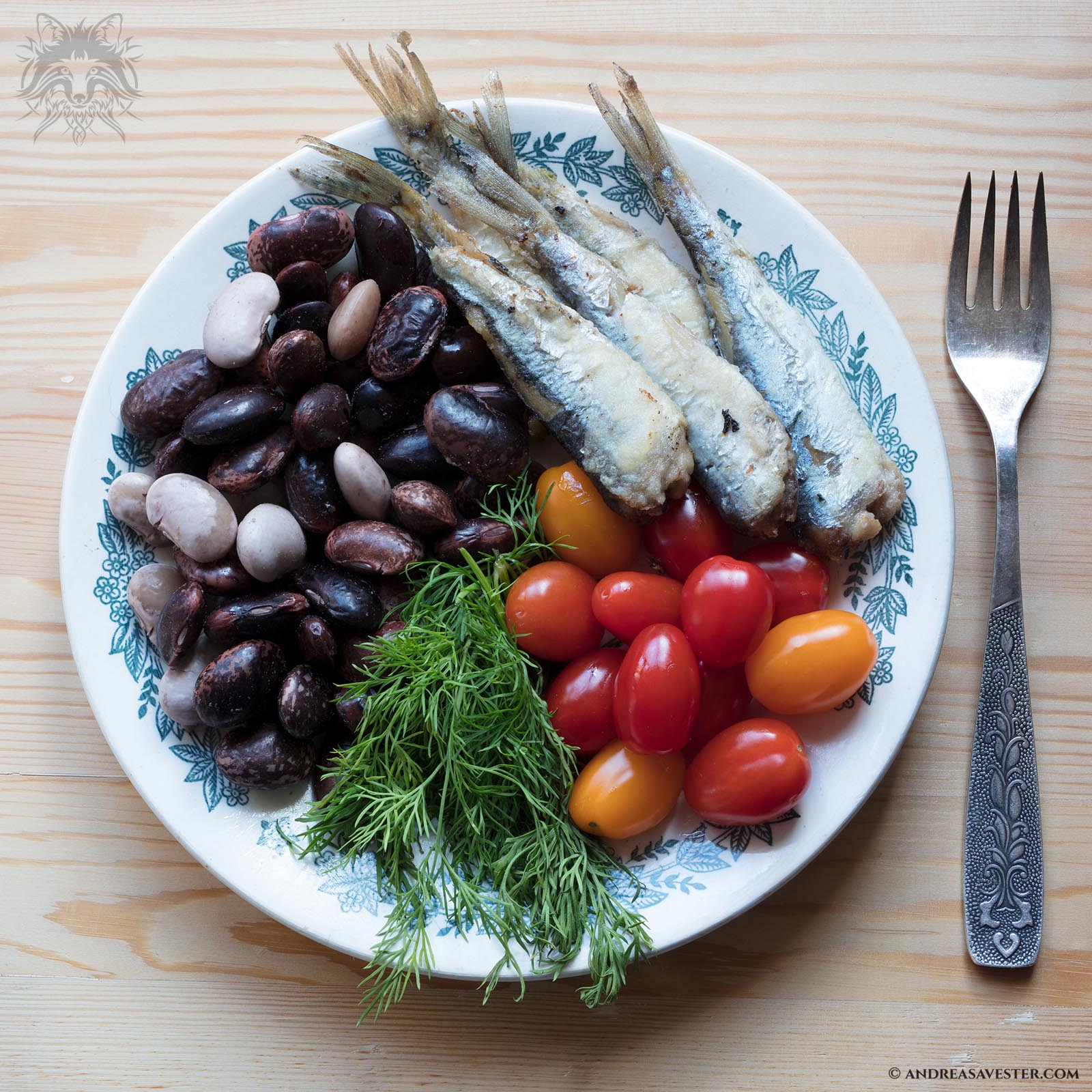 And here’s my lunch from last week. Pan fried herrings, boiled beans, tomatoes, and dills. My dogs got the fish heads and bones.

And here’s the underlying problem—the society has progressed to the point that some perfectly edible foods are no longer considered fit for human consumption or sold in places where the average person is likely to buy their food. This is wrong. This is wasteful. Producing animal foods creates more environmental harm than producing plant foods. If we insist upon eating animals, at the very least we should eat the whole animal and not just some select few parts of it.

The underlying idea behind advising people to eat lean meats is to reduce the saturated fat consumption. In general, scientists and dieticians recommend people to consume less than 10% of all their daily calories from saturated fat. But come on, it’s not like we need to throw out animal skins and fat in order to reach this objective, instead we can also reduce our saturated fat intake by, gasp, eating fewer animal foods.

As for convenience, human desire to buy foods that require as little preparing and cooking as possible only further exacerbates the problem. Consider fish, for example. When you get a whole fish, in order to make some fish soup, you have to cut the fish, place it in a pot, boil it for a while, remove edible flesh from the bones. Of course, buying a fish fillet that is already free of bones and entrails is more convenient and faster. I get why some people like it. But the result is also more wasteful. Besides, some amazingly tasty dishes require a bit of effort to make them. But they are tasty. So the time investment is worth it. And everybody should be capable of slicing bread. It literally takes only a few seconds. I cannot comprehend why sliced bread became so popular. (Personally, I still buy my bread non-sliced. I also buy whole fish from the farmers’ market whenever possible.)