Some meta-news, I have a new job starting this week and the hilarious thing is, since it’s the holidays, I get a bunch of days off over the next two weeks. It’s a grassroots environmental activism role that pays mediocre. But at least a lot of it is outside, healthy work, with like-minded mostly, young idealistic progressives. I don’t get my first partial check until mid January, so pleeease consider a small holiday donation to Paypal at the email darksydothemoon-at-aol. Thanks!

Today is the December solstice, the shortest day of the year in the northern hemisphere and the longest day down under. But it’s not the earliest sunset or latest sunrise in the north. How could that be? Follow below the fold for a visual explanation. 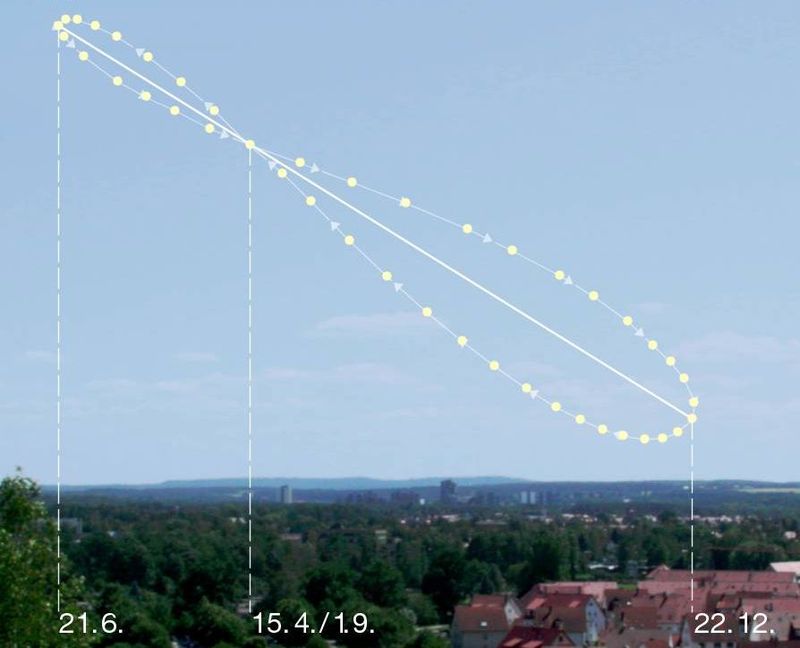 There’s a graph showing the position of the sun at its highest point of the day throughout a year. I think this was done for the year 2010, when the solstice fell on the 22 of December. This year it’s today, the 21st, at 6:03 PM Eastern in the US to be exact. At that moment the sun will swing through the point laying on the axis at the bottom lower right marked 22.12. This image is looking northeast taken fairly far north up around the Canadian border, south is to to the right, and we can see the point 22.12 is when the sun is farthest south. Thus it’s the shortest day in the north and the dynamic is reversed below the equator making it the longest day there. Simple enough.

But you notice the points right before and below the the one marked 22.12, the sun is lower in the sky at its highest position of the day, closer to the horizon. That means it will rise a few minutes later on that day than it does on the actual solstice. That day usually works out to be about two weeks before the solstice. A similar thing happens slightly above the solstice point a couple of weeks later, meaning the sun will set earlier then than on any other day. The solar system doesn’t care about our notions of regular time, solar and sidereal time don’t sync up perfectly with our clunky mechanical clocks, but it’s close! Here you can see one way those small deviations peek out from the noise.

Nowadays we know how the world turns and how the solar system is laid out. There are no worries the sun will keep going until it disappears altogether, never to return. But it in primitive times they couldn’t be sure. As far as neolithic farmers were concerned, they were clearly living on a giant flat plate and, without sunlight, there would be no crops, no plant growth, no food for anyone or anything. Not to mention no light and lots of bleak cold. No doubt over the course of a single lifetime, early priests and medicine women or whatever they were called, caught on that sun always comes back. But leveraging the event for power and influence had some additional value, both for the culture and the shamans, so they gradually built up various ceremonies, rich and diverse across the world, but all for the same reason: please sun, come back!

Every man and every women learned from their first memories that events in the sky had a huge effect on their day-to-day lives. When to plant, when to reap, when to hunt, when the birds will come back, when the rain will stop or start, or the local river might flood. It’s understandable they might come to generalize that those same celestial events could affect other details. When to marry, when to make peace or war, who should be chief or king. Maybe there’s someone up there controlling the whole thing … better keep them happy!

Without Internet or telephone or TV or even books, all they had for entertainment was stories told around the campfire, gossip, and observed phenomena in nature. If the sun was so important, maybe other, more subtle changes in smaller lights, what we know to be stars and planets, could have important consequences too. If only they could be correctly interpreted! A big part of correct interpretation is keeping track of what was predicted last time this planet or that star appeared in a certain place, and viola, societies that could record that now had a selective advantage. The genesis of writing and all the benefits that flow from it was, in part, developed because of the importance of keeping track of stellar events and syncing them up with what actually happened.

There you go. There are other factors contributing to the birth of religion, death being one of the more obvious, the value of suspecting and investigating hidden cause and effect being another. Harshly penalizing anyone who didn’t express sincere belief probably helped spread the faith, too! But it’s fair to speculate a big part of what would become organized religion, in all its myriad forms and with all its focus on the “heavens,” was born and embedded deeply into cultures over many generations in every society on Earth simply because of the seasonal movement of the sun and stars. Unfortunately, the parts that we now know to be wrong got embedded along with it and, as we all now know, they proved difficult to shake off as we stumbled toward technological understanding. A stumbling, one foot forward one foot back process that sadly continues to this day.

North Korea may be under sustained cyber attack at this time » « Does Mars harbor a hidden gift just in time for holidays?