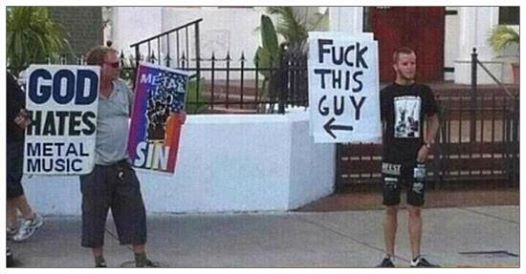 God hates rock-n-roll, just ask anyone over the age of 80 who lives in the great state of delusion. Proof? S/He has smited the great AC/DC … after more than 40 years of rocking:

Link — AC/DC are ending their 41 year career on a terribly sad note. Plans were underway for a new studio album, their first since 2008’s monumental Black Ice, and a ’40th Anniversary’ world tour, 40 huge shows across the globe. More than a month ago, founding member, rhythm guitarist, co-producer and co-songwriter Malcolm Young had a stroke, which left a blood clot on his brain.
When AC/DC reunited at the start of April to begin a month of rehearsals, in the lead-up to new album recording sessions, Malcolm discovered he couldn’t play. At least, he couldn’t play like he used to play. Nothing has been officially confirmed, as of this writing, but friends and family members have been discussing what happned to Malcolm for the past couple of weeks. The blood clot, resulting from the stroke, is believed to be why Malcolm couldn’t keep working. Although friends have described Malcolm’s condition as serious, it doesn’t mean he won’t recover. People do get better after strokes, and people do recover lost skills.

An official announcement is expected today. But reports have since filtered in that Young’s condition is progressive, there are rumors he’s having serious memories problems. Kinda late there, Lord, the Satanic damage has pretty much been wrought. And one has to question the effectiveness of smiting by the same natural causes afflicting millions of people every year. Wouldn’t break-up by divine boils or death by holy locust be a far clearer demonstration of His mighty Wrath?

I think anyone who thinks God hates rock and roll has it backwards, S/He clearly loves the hard stuff! Geez, Keith Richards and David Bowie are still walking the Earth and stalking souls? The fact that so many of these aging rockers are still able to feed themselves, much less alive, after years of sex, drugs and rock and roll ought to be a Papal sanctified miracle in itself. Nevertheless, with AC/DC’s likely demise a little more of our youth fades away. Is that better than burning out?