He talks about what is going on right now as Trump and his lackeys stoke fear and racism during the RNC convention. He shows how the Kenosha police department was in league with the heavily armed white militia that went to Kenosha. The murderer who killed two people and injured a third was one of those people and the police just ignored him as he walked towards them, even though people were yelling that he had just killed a man.

This is Trump’s America.

I have mentioned before how comedy writers and cartoonists often give the name Bob to a character because, for some reason, it seems to make things funnier. You hardly ever see other names being used. Recently I came across three instances of this within a week. 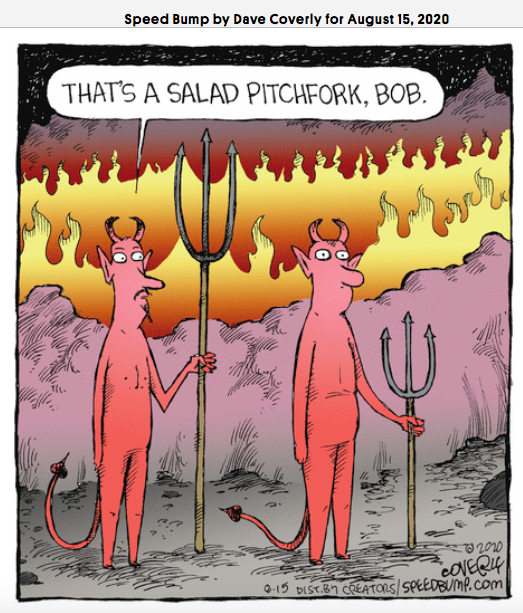 END_OF_DOCUMENT_TOKEN_TO_BE_REPLACED

Stuart Stevens, a veteran political consultant for the Republican party who worked on the campaigns of Bob Dole, George W. Bush and Mitt Romney, is the latest in that long line. In his case, at least he did not support Trump in 2016 and did criticize him then, for which he was attacked by Republicans in turn. He has published a new book It Was All a Lie: How the Republican Party Became Donald Trump where he argues that Trump is the end result of a long process in which the party abandoned its policies of fiscal restraint, personal responsibility and family values. He argues that he now thinks that the party never really believed in those values, and he acknowledges that he too was partly responsible for taking part in that charade
END_OF_DOCUMENT_TOKEN_TO_BE_REPLACED

I have not written anything about the Democratic convention that was held this past week where Joe Biden and Kamala Harris were formally nominated and elected to be the party’s candidates for president and vice president for the election on November 3. Instead I will leave it to Samantha Bee and Stephen Colbert to do the honors..

END_OF_DOCUMENT_TOKEN_TO_BE_REPLACED

He shows that thanks to a mixture of incompetence and outright racism, people of color are much more likely to not make it into the pool of potential jurors and even if they do get there, are less likely to be actually allowed to serve as jurors. Prosecutors especially find ingenious ways to circumvent the prohibition that people cannot be excluded on the basis of race by finding other reasons, even though studies suggest that diverse juries are more thorough, thoughtful, and arrive at more just verdicts.

Minhaj announced that his show has been cancelled by Netflix.

When Time magazine named Minhaj one of the 100 most influential people in the world in 2019, fellow comedian Trevor Noah praised the “whip-smart commentary, charisma and sincerity” the Muslim presenter used on Patriot Act.

“We’ve needed Hasan’s voice since Donald Trump came down that golden escalator and turned immigrants and Muslims into his targets,” Noah wrote at the time.

Minhaj’s series ran for 40 episodes across six seasons from December 2018, with the host riffing on the news stories of the day.

It is not clear why this action was taken. It definitely could not be because it was of poor quality. It was slickly and smoothly produced even with all the pandemic restrictions. I thought that his show, along with John Oliver’s Last Week Tonight and Samantha Bee’s Full Frontal were three of the best weekly shows, providing well-researched, informative, and topical programs on important issues, but with a lot of humor woven in so that they were lively. They were all must-see TV for me. It is interesting that all three hosts are alumni of The Daily Show during the time when Jon Stewart was at the helm. Other ‘correspondents’ on the show such as Stephen Colbert, Steve Carell, and Jessica Williams all went on to have successful careers.

Netflix does not usually release the ratings for its shows so we do not know if low ratings were the reason for the cancellation. But the timing is bad. We are heading into an election season and we need all the hard-hitting, investigative programs we can get so that we do not drown in trivia.

He gives a quick recap of he situation.

That was the charge made by a group of people outside a store in Orange County, CA that is near Los Angeles.

END_OF_DOCUMENT_TOKEN_TO_BE_REPLACED

The comedian who shot to fame with her viral videos lip-syncing of Trump’s inanities guest hosts Jimmy Kimmel’s show. Here’s her monologue.

She is apparently being given a Netflix special.