Many people would have heard of Tommie Smith and John Carlos, winners of the gold and bronze medals in the 200 meters event at the 1968 Olympics held in Mexico, because of their black-gloved clenched fist salute protesting racism captured in the iconic photograph below. Carlos had left his pair of black gloves back at the Olympic village, which is why he and Smith each wore a single glove on different hands. 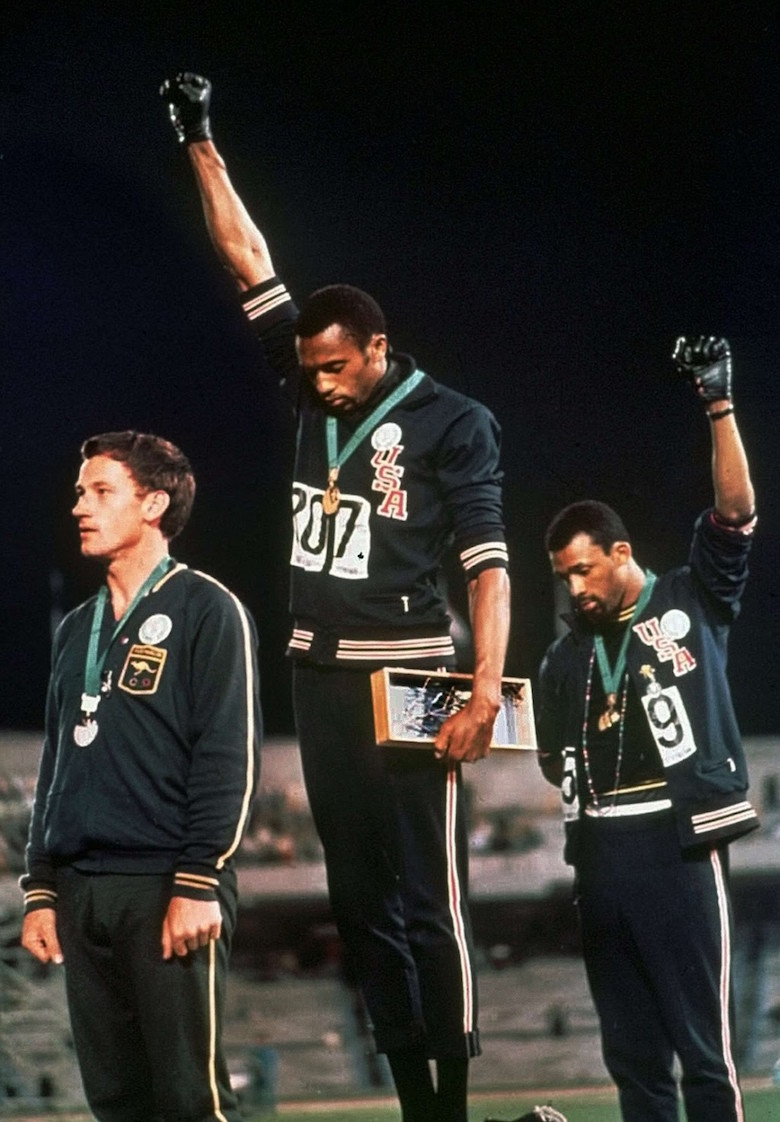 The third man in the photo is Australian Peter Norman, who was white and a staunch anti-racism advocate. He won the silver medal and also joined in the protest but differently, wearing a button that said “Olympic Project for Human Rights”. For his action, Norman was vilified by the people in his home country, ostracized by the Australian authorities, and deliberately overlooked for the 1972 Olympics, despite being the highest finisher for an Australian sprinter in Olympic history and a contender for the gold medal. When the 2000 Olympics were held in Sydney he was not invited by the Australians to be part of the ceremonies. It was American athletes and the US Olympics Committee that invited Norman to be part of their delegation and stay with them at the village. It was just recently that the Australian Olympic Committee tried to make amends for their past awful behavior and awarded Norman a posthumous ‘Order of Merit’.

A couple of years ago, I wrote about the deep and lasting friendship that developed between these three men, including how Smith and Carlos went to Australia to deliver eulogies and be pall bearers at Norman’s funeral in 2006 following his death from a heart attack at the early age of 64. In the June/July 2018 issue of The Progressive (not online yet), Dave Zirin adds some stories of the bonds between them that I was not aware of.

John Carlos has told me, in conversations over the years, “I always felt like Peter Norman, after those Olympics, had it tougher than Tommie or me because in the United States they took turns kicking our asses. In Australia, Peter was on his own.”

When San Jose State University erected a massive statue in tribute to alumni Smith and Carlos in 2005, they decided to leave the silver medal stand empty. After Carlos received word that Norman would not be represented, he marched into the office of the school’s president and said he wouldn’t have anything to do with a statue of 1968 that erased Peter Norman from their shared history.

But Norman, contacted by phone, told Carlos that this space was left open at his request, so that people “can climb the statue and stand where I stood and feel what it felt like for me to be a part of history” To this day, when there are protest actions on campus, students climb to the spot where Peter Norman stood.
…

Two years ago, another statue of Tommie Smith and John Carlos was unveiled, this one at the National Museum of African American History and Culture. On this occasion, Norman was included, the carefully crafted detail of his Olympic Project for Human Rights button on full display.

“We can’t let them erase Peter and have statues or photos or book covers just be of Tommie and me”, Carlos said. “When they try to erase Peter, they are really erasing the truth that there were young white people who stood with us, who stood with our message of racial justice and our solidarity with oppressed people throughout the world. They want to isolate us and isolate the message.”

Peter Norman has been the ultimate symbol of true kinship in struggle for fifty years. His belated recognition by the Australian Olympic Committee presents an opportunity to recall what an extraordinary person he was, and why his part of this story – his place in the picture – matters.

Athletes have a highly visible platform from which to make statements about justice but not many of them do because they must be willing to pay a price as we saw with Smith, Norman, and Carlos back then. We still see it now with people like Colin Kaepernick who are vilified by odious people like Donald Trump and his supporters.