I was recently reminded of an iconic Olympic photograph, of American sprinters Tommie Smith and John Carlos, who made the black power salute protesting conditions in the US after winning the 200m gold and bronze medals respectively at the 1968 Mexico Olympics. Both Smith and Carlos were vilified for their action. 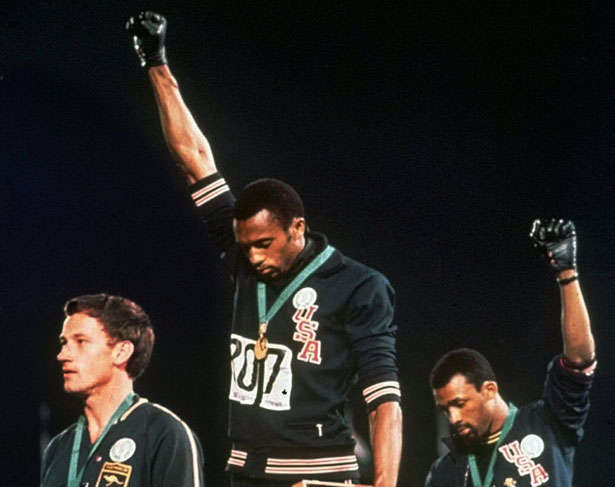 What is less well known is that the third person on the stand, Australian silver medalist Peter Norman, was also a strong human rights advocate and although he did not give the same salute was, along with them, part of a group known as the Olympic Project for Human Rights and all three wore circular patches on their clothes with those words on them that you can see in the above photograph.

Dave Zirin has an excellent article about them and their actions.

In 1968, the main demands of OPHR centered around the removal of open bigot “Slavery” Avery Brundage as head of the International Olympic Committee, ceasing participation of apartheid South Africa and Rhodesia, hiring more African-American coaches and restoring Muhammad Ali’s boxing title, stripped over his resistance to the United States’ war in Vietnam. Today, Avery Brundage, Rhodesia and apartheid South Africa are thankfully in history’s dustbin, African-American coaches are hired without controversy and Muhammad Ali has become a living saint.

Zirin argues that the Olympics needs a New OPHR to protest the way the Olympics games nowadays abuses the local populations of the host cities but wonders whether the athletes of today would risk vilification the way that Smith, Norman, and Carlos did.

Would athletes be taking one hell of a risk by speaking out? Absolutely. Look at what Carlos, Smith and Norman suffered. First, there was the media barrage as the Los Angeles Times accused Smith and Carlos of a “Nazi-like salute” and the Chicago Tribune called their actions “an embarrassment visited upon the country,” an “act contemptuous of the United States,” and “an insult to their countrymen.” But the most shameful display was by a young reporter for the Chicago American named Brent Musburger who called them “a pair of black-skinned storm troopers”, a slur for which he has never apologized.

Then upon returning home, Carlos, Smith and Norman faced the daily struggles of being pariahs and having to scrap just to survive. As Dr. Carlos said to me in 2003, “I don’t feel embraced, I feel like a survivor, like I survived cancer. It’s like if you are sick and no one wants to be around you, and when you’re well everyone who thought you would go down for good doesn’t even want to make eye contact. It was almost like we were on a deserted island. That’s where Tommy Smith and John Carlos were. But we survived.” This sacrifice of privilege and glory, fame and fortune, for a larger cause is something they never regretted.

What happened to Norman, one of the best sprinters Australia has even produced? He too was vilified and punished for his act of solidarity with the oppressed, because at that time Australia had a ‘White Australia’ policy that severely restricted the immigration of people of color and practiced discrimination against its own Aboriginal population.

But while Smith and Carlos are now feted as human rights pioneers, the badge was enough to effectively end Norman’s career. He returned home to Australia a pariah, suffering unofficial sanction and ridicule as the Black Power salute’s forgotten man. He never ran in the Olympics again.

“As soon as he got home he was hated,” explains his nephew Matthew Norman, who has directed a new film — “Salute!” — about Peter’s life before and after the 1968 Olympics.

“A lot of people in America didn’t realize that Peter had a much bigger role to play. He was fifth (fastest) in the world, and his run is still a Commonwealth record today. And yet he didn’t go to Munich (1972 Olympics) because he played up. He would have won a gold.

Although Norman was a staunch anti-racism advocate, no one expected him to take a stand in Mexico.
…

Smith and Carlos had already decided to make a statement on the podium. They were to wear black gloves. But Carlos left his at the Olympic village. It was Norman who suggested they should wear one each on alternate hands. Yet Norman had no means of making a protest of his own. So he asked a member of the U.S. rowing team for his “Olympic Project for Human Rights” badge, so that he could show solidarity.
…

The fallout was immediate for Smith and Carlos, who were sent home in disgrace. Norman was never given the chance to go a step closer. He was never picked to run in the Olympics again.
…

Norman retired from athletics immediately after hearing he’d been cut from the Munich team. He would never return to the track. Neither would his achievements count for much 28 years later when Sydney hosted the 2000 Olympics.

“At the Sydney Olympics he wasn’t invited in any capacity,” says Matthew Norman.

“There was no outcry. He was the greatest Olympic sprinter in our history.”

In his own country Peter Norman remained the forgotten man. As soon as the U.S. delegation discovered that Norman wasn’t going to attend [the Sydney Olympics], the United States Olympic Committee arranged to fly him to Sydney to be part of their delegation. He was invited to the birthday party of 200 and 400-meter runner Michael Johnson, where he was to be the guest of honor. Johnson took his hand, hugged him and declared that Norman was one of his biggest heroes.
…

At the funeral both Smith and Carlos gave the eulogy, where they announced that the U.S. Track and Field association had declared the day of his death to be “Peter Norman Day” — the first time in the organization’s history that such an honor had been bestowed on a foreign athlete.

Both men helped carry his coffin before it was lowered into the ground. For them, Norman was a hero — “A lone soldier,” according to Carlos — for his small but determined stand against racism.
…

Arguably the biggest price Norman paid was the fact that his run in the 200 meters final had been obscured by the Black Power salute. It remains to this day one of the finest, and least expected, individual performances by a sprinter at the modern Olympics.

By the end of the final, Norman had shaved half a second off his best time. His full potential was never realized yet, even after the ignominy of his return, Norman bore no grudges.

“It has been said that sharing my silver medal with that incident on the victory dais detracted from my performance,” Norman explains poignantly at end of “Salute!”

“On the contrary. I have to confess, I was rather proud to be part of it.”

A great story of people coming together to fight oppression. It deserves to be better known.