As the time approaches when the US Supreme Court opinion on the same-sex marriage issue will be released (June 30 is the last day that the court will be in session), I decided to revisit my prediction (made on May 1 after the oral arguments were presented) on how I thought the court might decide.

Recall that the court had asked the lawyers to present arguments on two issues:

If the court rules ‘yes’ on issue #1, the second one becomes moot.

My original prediction was that they would rule ‘no’ narrowly (5-4) on the first question and ‘yes’ (5-4 or even up to 6-3) on the second. So while this would not be the ringing affirmation of equality that supporters of the LGBT community sought, the practical effect of the second decision would be to legalize such marriages everywhere as long as a single state allowed it.

The reason that I decided to revisit my prediction was because of a conversation that I had with a lawyer who works on constitutional law issues and has been following this case. His reading of the oral arguments was that the reservations about same-sex marriage that justice Anthony Kennedy expressed were typical of him, made in order to probe the lawyers to go further and not a sign of his actual views, and that given his past rulings in favor of gay rights, there was an 80% chance that he would vote ‘yes’ on the first question.

I thought that given the US Supreme Court’s deference to precedent, the best thing to do would be to look closely at Kennedy’s majority opinion in the 5-4 decision in the 2013 United States v. Windsor case involving the Defense of Marriage Act that struck down the provision that banned the federal government from recognizing same-sex marriages that had been performed legally in states. (Another provision of DOMA allows States to refuse to recognize same-sex marriages performed under the laws of other States (similar to question #2 in the current case) but it was not the subject of litigation in the Windsor case and so was not adjudicated.)

I felt that whatever Kennedy decided this year would closely hew to what he wrote just two years ago.

In reading his Windsor opinion again, there were two elements that pointed in opposite directions. On the one hand, I was struck by how strongly he made the case that it was the prerogative of the states to set the rules and regulations of marriage, saying things like “By history and tradition the definition and regulation of marriage, as will be discussed in more detail, has been treated as being within the authority and realm of the separate States.” That worked in favor of same-sex marriage in that case because he was saying that the federal government had no right to deny benefits to same-sex couples whose marriages were recognized by states.

This would suggest that his reservations during oral arguments about the wisdom of the court ‘redefining marriage’ and telling states what it should be may reflect his real views and supports my contention that he will vote ‘no’ on question #1 and ‘yes’ on question #2.

But he also qualified that by saying that this was not an unrestricted right granted to the states and that “State laws defining and regulating marriage, of course, must respect the constitutional rights of persons, but, subject to those guarantees, “regulation of domestic relations” is “an area that has long been regarded as a virtually exclusive province of the States.”

So this raises the issue of why some states have forbidden same-sex marriage at all and whether those reasons are justifiable and “respect the constitutional rights of persons”. Here we get to the issue of which of the three standard should be used to judge, as Lyle Denniston explains.

There are various levels of such a test, ranging from the easiest to meet to the hardest. When the right involves a claim of equality, a law or policy that is said to violate that right is judged by one of three tests: the “rational basis” test, which is very easy to meet, and can be satisfied if there is any reasonable explanation for its passage; the “heightened scrutiny” test, which is not as easy to meet because a law or policy must be shown to have served an important public objective, and the “strict scrutiny” test, which is so demanding that a policy can almost never survive it; a policy put to that test must serve a compelling government interest, and be narrowly crafted to serve that interest. Race discrimination, for example, is always judged by that tough standard.

Any discrimination based on race, religion, national origin, or alienage (what are known as ‘suspect classes’) automatically get strict scrutiny. Gender and sexual orientation have not been so designated and thus it is not clear what standard the court will apply in those cases. Oddly enough, this issue of which standard to apply, although so important, was not raised during the oral arguments

It is not always the case that laws that require a rational basis survive and those that require strict scrutiny fail. For example, the court ruled that a city ordinance forbidding the creation of a home for disabled people was motivated by a simple desire to keep them out of that neighborhood and thus failed to meet the rational basis standard. On the other hand, the Supreme Court approved the internment of Japanese-Americans during World War II even though that policy required strict scrutiny.

In the Windsor case Kennedy ruled that, looking at how the DOMA legislation was passed, the federal non-recognition of same-sex marriages by DOMA was motivated by animus towards gay people, and thus failed to meet even the rational basis test, though which test needed to be used was not made explicit.

So given that history, I still think that Kennedy will vote ‘no’ on question one, unless he concludes that bans against same-sex marriage are exclusively motivated by animus against gay people out of a desire to prevent those couples from having the same dignity of marriage conferred on opposite-sex couples, and thus fails to meet the rational basis test. But that would seem to require deciding that all states had the same motivation in passing such bans and I find it hard to imagine that the court will make such a sweeping judgment without a state-by-state analysis of the history of each state’s legislation.

So after reconsidering, I will stick with my original predictions. But I would like to be proven wrong and that the court will vote ‘yes’ on question #1. 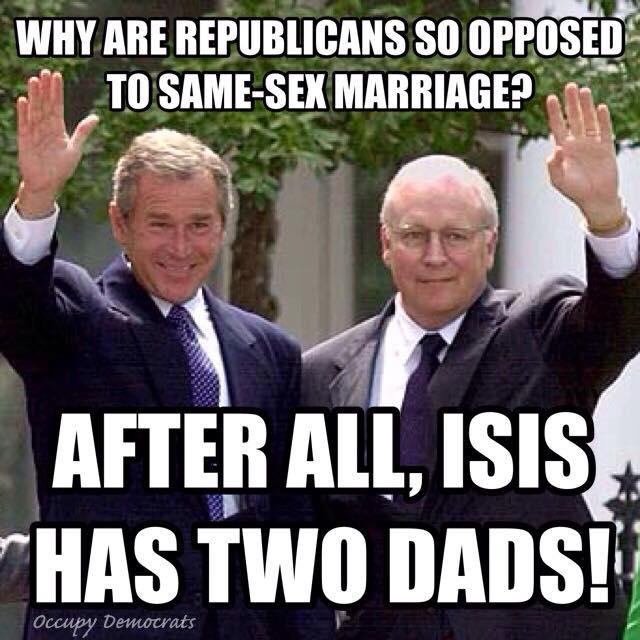 Are you poor? » « Ben Carson’s evasions on discrimination against gays