There were groans of dismay throughout Nerd-dom when it was announced that Ben Affleck would be playing Batman in the next movie in the franchise. But then the always over-the-top Kevin Smith saw the costume.

“I saw the Batman costume. More than that, I saw a picture of [Ben Affleck] in the costume…I don’t want to give anything away ’cause that is up to them and stuff, but I am going to say this…I instantly bear hugged [Snyder]. You have not seen this costume on film before. For a comic book fan, it was mind-bending… Because every other movie does this Matrix-y black armor thing…There wasn’t a single nipple on this suit. I think everyone is just gonna be like ‘Holy S**t!’ It’s its own thing. We haven’t been down this path before. Even the hardest core [most skeptical] person will be like ‘Alright, I’m ready.’…It seemed like it was very [Redacted] influenced.”

And as we all know, the most important thing in a superhero movie isn’t the plot or the acting — it’s the special effects and the fancy costumes.

But I have to agree with Smith. I have seen the costume, and it is awesome. It’s going to make the movie for sure. And here it is.

END_OF_DOCUMENT_TOKEN_TO_BE_REPLACED

Near as I can tell from the trailer for I, Origins, the movie is about an affectless neuroscientist who takes pictures of eyes for Science, and then because he finds someone with similar irises to his dead lover, decides that reincarnation has been proven.

All I know is that whoever wrote this dreck has no idea about how scientists think.

Oh, joy. Another What the Bleep Do We Know, a bad and stupid movie that clueless nitwits will be throwing in my face for years to come to inform me that science is wrong.

The movie Fargo warped the image of Minnesota—and now the FX channel is going to be showing a new, 10 episode miniseries titled… Fargo, starring Bilbo Baggins with a Minnesota accent.

An original adaptation of the Academy Award®-winning feature film, Fargo features an all-new “true crime” story and follows a new case and new characters, all entrenched in the trademark humor, murder and “Minnesota nice” that made the film an enduring classic.

Yep, that’s exactly what living in rural Minnesota is like: funny accents, and grim, understated humor over all the dead bodies littering the snow. It’s a sensibility that has always informed my blog, dontchaknow.

Don’t worry, this video is perfectly safe for work, except for the little fact that if you watch to the very end you’ll get sucked into your computer screen and transported to the 19th century. This morning, I had to fight my way through a mob of Norwegian farmers who hardly spoke any English to find a zoetrope and phenakistascope (which were very scarce on the empty Minnesota prairie, I tell you) and play them backwards to get home again. Bracing.

The reviews for Aronofsky’s movie, Noah, are coming in, and they’re mixed. There are parts that are brilliant and provocative, and others that are ludicrous, over-the-top, action movie CGI. One thing everyone is agreeing on, along with Ken Ham and me, is that it is decidedly unbiblical, which is totally unsurprising. Don’t people ever read their Bibles? Most of these famous myths out of that old book are short, with little characterization or context, and are more like an elevator pitch than a full narrative…so every Bible story has to be padded. Turning a one page sketch into a two hour movie? What do you expect?

Apparently, this version of the Ark story is more action/fantasy story than reverent Bible worship, which is fine by me. This is pretty much what I expect:

There’s so much delusion and so much delight in “Noah” that I have trouble distinguishing one from the other, or determining whether its most outlandish flourishes qualify as mistakes or as strokes of genius. But let’s be clear that the CGI-animated opening sequence, an “earlier on our show” montage that tells the story of Genesis from the creation through Adam and Eve and Cain and Abel, is a mistake. Even there Aronofsky and cinematographer Matthew Libatique deliver striking images – the forbidden fruit of the Tree of Knowledge pulsing like a human heart; the father and mother of us all as golden-hued, naked super aliens – but the net effect is something like a Catholic Sunday-school video mixed with the scenes Ridley Scott rejected as too hokey for “Prometheus.”

I may have to watch it after all. “Prometheus” was so bad it was entertaining.

By the way, Ridley Scott is working on a Biblical movie, too — a retelling of the Moses story. He’s also going to make a sequel to “Prometheus”. Oh, and also, Michael Bay is remaking the Teenage Mutant Ninja Turtles.

It looks like it’s going to be a banner year for really bad big-budget movies. I don’t like bad movies all that much.

The normal explanation would be that the graphics are clumsy and out of date, the character animation is creepily unhuman, the plot is inane, and the preachy moralizing and weird evangelism is off-putting. But to the people at Phoenix Interactive, who are having a hard time getting funding for a game called Bible Chronicles: The Call of Abraham, those factors are not to be acknowledged. It’s because of SATAN.

"I need to be clear on this point: Are you telling me that Satan is literally working to confound your plans to release this game? You’re saying that the actual Devil is scheming against you?"

I’m sitting in a nondescript office in an unremarkable neighborhood in Bakersfield, CA, interviewing three men about their plans for a Biblical game based on the life of Abraham.

I believe that, 100 percent, replies Richard Gaeta, a co-founder of Phoenix Interactive. He argues that since the launch of the Kickstarter for Bible Chronicles: The Call of Abraham, trouble has come into all their lives.

It’s very tangible, adds his business partner Martin Bertram. From projects falling through and people that were lined up to help us make this a success falling through. Lots of factors raining down on us like fire and brimstone.

Nobody is winking or joking or pulling my leg. There is no irony here. They are absolutely serious.

It’s an interesting rationalization. None of their problems are their fault, it’s all the work of a malignant supernatural entity. But what I found particularly intriguing is the extent to which they’ve taken it: failure is a sign of their importance.

If Satan is rallying some of his resources to forestall, delay, or kill this project, I think, this must be a perceived threat to his kingdom, adds Ken Frech, a religious mentor to the project. I fully would expect something like this to have spiritual warfare. Look at the gospel accounts of demons and so forth. That’s reality. Many Americans don’t believe it anymore. That doesn’t change reality.

Since I’m a nice guy, and very sympathetic, I propose that we all shun every product from this company and the wackaloons running it, just so they’ll all feel very, very important. And if we all point and laugh at them, their self-esteem will skyrocket, because it can only mean that Satan is paying a lot attention to them.

We atheists live lives of sacrifice, working so hard at the request of our master Satan to make Christians feel important.

Walken is the Man.

Sorry, gang. I thought this music video by Katy Perry was eminently forgettable pop, overproduced and not particularly interesting, but you get to see it anyway.

In case you had too much taste to bother, Katy Perry plays an ancient Egyptian pharoah — you know, pyramids, stilted poses, animal-headed gods, etc. — who disintegrates a series of suitors with magic and takes their treasure. Really, that’s it. Only one of the suitors (at about 1:10 in the video) is wearing a necklace with a squiggle in it that some Muslims claim resembles the name of Allah, so this video is a work of blasphemy. You’ll have to look very closely to even see it (also, it looks like the few frames where the emblem was visible have already been edited out). 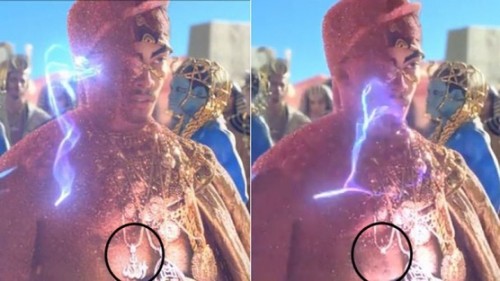 I know! Why are Muslims upset? It’s all those followers of Anubis and Bastet and Osiris and so forth who ought to be up in arms! But it’s certain flaky weird Muslims who are posting a petition demanding that the video be taken down. Makes sense; the polytheistic religion of ancient Egypt, founded around 3100 BCE, and monotheistic Islam, founded around 600 CE, are so easily confused.

This is the reason for lodging the petition so that people from different walks of life, different religions and from different parts of the world, agree that the video promotes blasphemy, using the name of God in an irrelevant and distasteful manner would be considered inappropriate by any religion.

Isn’t it heartwarming that there are people who dedicate their time and effort to protecting the delicate sensibilities of invisible imaginary super-powerful beings?

Anyway, if you think Katy Perry needs some urging to resist the efforts of kooks to suppress her commercially lucrative work, there is a counter-petition. It seems superfluous to me, but OK.

The one question in my mind is why are fanatical Muslims stepping frame by frame through Katy Perry videos anyway?

I had the Academy Awards tuned in to the background last night. I’m not a fan; like many of us, I just like to gawp and snipe at overprivileged rich people, so it was just occasionally entertaining noise to catch my attention in between papers. Here are the things that made me bother to look up.

May I just say that there aren’t any large multicellular animals that stand a chance against human technology — they are intrinsically fragile — which makes the fear of this creature rather unbelievable. I’m much more terrified of microorganisms.