The latest gender critical outrage: the Women’s March logo has 3 profiles, and one of them doesn’t look feminine enough. It must be a man, baby!

"We're here to protect women! Unless they don't have the nose shape we like. Or they have broad shoulders. Or anything else we don't deem feminine enough"
I keep saying GCs are doing nothing but reinforce gender stereotypes that harm women https://t.co/rQqMH4kCaX

There are no women on planet Earth who have a face anything like the one on that alien creature on the left! As we all know, you can reliably determine the sex of an individual from the shape of their nose. Or something. It’s biology, man.

Oh, here’s a fun game! I found a page of cameo portraits of Victorian ladies, with lots of photos of Victorian…uh, women. I’m not sure anymore. According to the GCs, the British empire must have been built by brave men who kept a trans woman at home, since there are a lot of deviations from the dainty feminine ideal there. 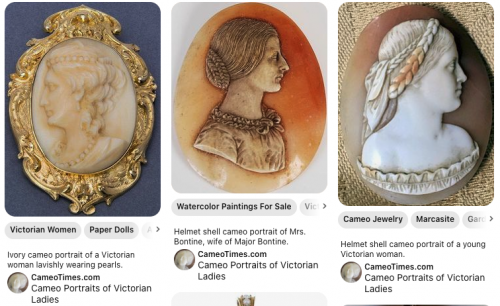 They’re all quite lovely — these were intended to be flattering portraits of their subjects — but I’m sure the GCs could pull out their calipers and determine that the majority were men in wigs.

Also, biology would tell you that not only is there a tremendous amount of variation in human facial features, but human perception is finely tuned to recognize those variations.

How to undermine Alzheimer’s research » « I’m supposed to thank someone for Friday?