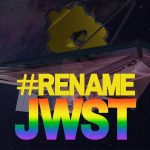 I learned three disappointing things about NASA today. There’s been an ongoing kerfuffle over the name of the James Webb Space Telescope, because Webb presided over a remarkably homophobic culture at the agency. Now internal documents about the debate over naming it have been revealed.

Internal NASA documents obtained by Nature reveal fresh details about the agency’s investigation last year into whether to rename its flagship James Webb Space Telescope (JWST). A group of astronomers had led a community petition to change the name, alleging that the telescope’s namesake, former NASA chief James Webb, had been complicit in the persecution and firing of gay and lesbian federal employees during his career in the US government in the 1950s and 1960s.

I already knew all that. Those aren’t the new disappointments.

One was that this problem goes all the way back to 1969, when a judge ruled on a firing case.

Although the documents reveal that key decisions were made in meetings and not over e-mail, they still show agency officials wrestling with how to investigate the allegations and control public messaging over the controversy. As early as April 2021, an external researcher flagged wording from the 1969 court ruling to NASA officials. It came in the case of Clifford Norton, who had appealed against being fired from NASA for “immoral, indecent, and disgraceful conduct”. In the decision, the chief judge wrote that the person who had fired Norton had said that he was a good employee and asked whether there was a way to keep him on. Whomever he consulted in the personnel office told him that it was a “custom within the agency” to fire people for “homosexual conduct”.

“I think you will find this paragraph to be troubling,” wrote the external researcher to Eric Smith, the JWST’s programme scientist at NASA in Washington DC. “‘A custom within the agency’ sounds pretty bad.”

Troubling? You think? The NASA personnel office considered it customary to fire anyone exposed as gay?

That’s old news, you say. What isn’t old is how the modern agency carried out their investigation.

NASA staff stated that it would only be a problem if they found evidence that Webb was "overtly anti-gay". At one point, there was an informal survey to take the temperature of the astronomy community on the name change, which consisted of calling ~10 faculty who are not LGBTQ+

The second disappointment is that they contacted 10 straight astronomers who said discrimination against gay people wasn’t a problem, and that was part of their ultimate decision to bury the controversy. Does anyone else see a problem with their methodology?

And then the third surprise.

The revelations about NASA’s decision regarding the JWST come at a time of increasing concern over the way the agency handles issues of identity. Earlier this month, employees at the agency’s Goddard Space Flight Center in Greenbelt, Maryland, were told that they would no longer be able to include pronouns, such as she/her or they/them, in their display names in agency computer systems. After the move was discussed on Reddit and the astronomy community reacted negatively on other social platforms, NASA put out a statement that employees could continue to include pronouns in their e-mail signature blocks.

How authoritarian of them. So this month the administrators were openly transphobic, while pretending that oh no, they were never ever homophobic? I don’t think I believe them, especially since they tried to hide their findings.