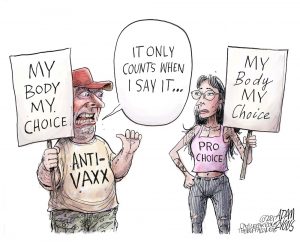 Should Texas punish abortions by putting teenage girls and women to death? Or not? That’s the current debate in the Republican Party of Texas, where outlawing abortion is no longer a question of “if” or “when” but a question of whether to kill women for getting one.

A Texas lawmaker has filed a bill that would abolish and criminalize abortions, leaving women and physicians who perform the procedure to face criminal charges that could carry the death penalty.

The legislation, filed Tuesday by state Rep. Bryan Slaton, does not include exceptions for rape or incest. It does exempt ectopic pregnancies that seriously threaten the life of the woman “when a reasonable alternative to save the lives of both the mother and the unborn child is unavailable.”

“It is time for Texas to protect the natural right to life for the tiniest and most innocent Texans, and this bill does just that,” Slaton said. “It’s time Republicans make it clear that we actually think abortion is murder. … Unborn children are dying at a faster rate in Texas than COVID patients, but Texas isn’t taking the abortion crisis seriously.”

The only abortion crisis is that these assholes want to ban it. Would you be surprised to learn that this same representative wants to roll back all of the pandemic prevention measures in the state? He thinks no one is dying of COVID, but that more “unborn children” (there is no such thing) are dying than…zero.

This bozo is eager to start killing adult women, though. Gotta get the body count up somehow.

The pandemic must end so my father’s ghost can rest » « How about if we just call it “The Homophobic Space Telescope”?