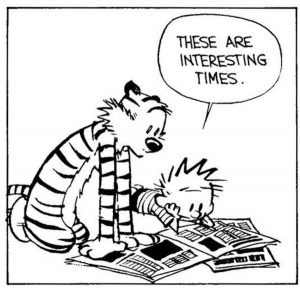 But here we are. It’s been a rough decade — we had a terrible one-term president who appalled most of us with his incompetence and corruption, and seemed to inspire the authoritarians and racists and wanna-be fascists. One of our political parties tumbled down into outright insanity, which isn’t a good thing for a country run by a two-party system. We’re repeating the Gilded Age crap, with billionaires getting richer and richer. The ongoing climate crisis continues to be ignored by our capitalist overlords. Then layer a pandemic on top of all that that has killed a million Americans and triggered another million or so it flamboyant science denial, rapidly spread by the greed of the social network poombahs.

We should cry out like Job, I should think. But now we get a major land war in Europe to add to the world’s tribulations.

I have no idea how that war is going. One thing that has repelled me lately on the media are all the pundits, whether they have a cushy sinecure at some major newspaper or they are Joe Nobody, sitting in his car opining at a camera (oh, how I loathe those videos of middle-class, middle-aged white guys sitting in their cars talking at their phones) telling me which side is going to win. Worse is when they declare why their side is going to when. Near as I can tell, the Right thinks the Russians will conquer because they despise pronouns, while the Left thinks Ukraine will win because Zelensky is sexy. They don’t know. I don’t know. It’s a cacophony of pure noise that isn’t helping.

Russia is making a massive effort, throwing all kinds of soldiers and artillery and tanks at Kharkiv. They could win the military battle, it wouldn’t surprise me. Ukrainians are brave, but bravery doesn’t stop a bullet. I have no idea what the outcome of the war will be, other than pain and death and misery, and we’ll have to helplessly wait and see what happens. Isn’t that annoying? Big dramatic bloody events occur, and we here on the other side of the world have to wait.

I do know that Russia is losing the diplomatic war rather brutally. Suddenly, coalitions and alignments and nations that have been around for practically a lifetime are shifting! I haven’t seen this kind of transformation since the fall of the Berlin Wall and the collapse of the Soviet Union. Finland is discussing joining NATO? Sweden is increasingly antagonistic to Russia? Ukraine has requested to join the EU, and some countries want to fast-track that application? It’s all happening so scary-fast. We’re racing towards a polarization and alignment of forces that we haven’t seen since the Cold War, and let me tell you, that’s not a good thing.

What I do find encouraging, though, is that the world was quick to react with open condemnation of Russia for invading a sovereign state and killing citizens. I just wish that the world had been equally damning when the US invaded a sovereign state and murdered hundreds of thousands of innocents — we can hope that what emerges out of this new world is an agreement that bullying smaller nations by powerful ones will no longer be tolerated.

Unless, of course, the bullying nation decides everyone needs a good scourging with nuclear fire.

And that’s all I know. Sit. Wait. Watch.

Hey, Job has sort of a happy ending, right? He loses his family, his health, and his security, but God gives him new kids at the end? It’s kind of warped that the Old Testament thinks families and kids are fungible, so I’m not going to take much consolation from that.