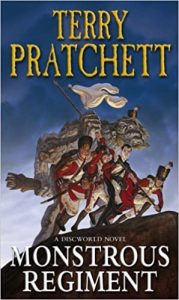 I was going to post this video, but Charly beat me to it. The YouTuber Shaun posted an excellent discussion of the recent gender critical freakout: they tried to claim that Terry Pratchett would have favored their intolerant anti-trans bullshit. Neil Gaiman, Pratchett’s coauthor, responded; Pratchett’s own daughter, Rhianna, was horrified that anyone would abuse his memory in that way. I agree. How anyone could read Pratchett’s work and think he wasn’t completely accepting of trans folk is a mystery, unless it’s just that they never read his books at all.

Shaun (and Charly) recommend his book Monstrous Regiment as far more illustrative of his views — it’s about a regiment of diverse women who all enlisted in the military by pretending to be men. You can’t find a clearer example of a refutation of a phony authorial interpretation. To be honest, I found it to be one of the weaker Discworld books…but it’s often because it gets rather heavy-handed in its dismissal of forced gender roles. It is not at all subtle, which makes it even more ridiculous that GC/TERFs would think Pratchett would take their side.

Did I really need a reminder of what my day will be like? » « Colonoscopy prep day!