It was a good 5 days. I’m an internet junkie, but my laptop died a few days before my flight, and while I considered bringing along an old clunker of a netbook, I eventually decided to be strong and go mostly cold turkey and hang out with the family. I had my phone as one slender lifeline to keep in touch with Mary, and that was it. So I visited my mother, my two sisters, my two brothers, my son and his wife, my grandson, and went to the beach and went fishing. I went for walks and looked at spiders. I went to a church, once. I didn’t do much of anything, actually.

I got home early evening last night, and was finally able to shuffle some money around on the internet and make the big announcement, but then I just hit the sack and slept in until 7am. I got up this morning and finally, after that respite, plunged back into the internet and…

Nothing has changed. The right wing is still ginning up a culture war, and they look even more stupid when you haven’t been desensitized by the continual barrage. I mean, look at these two idiots: 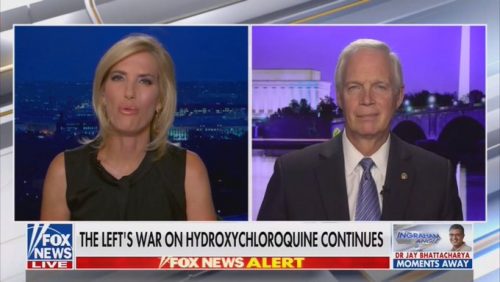 The Left’s War on Hydroxychloroquine Continues? What? Hydroxychloroquine is a dangerous drug that shows no effectiveness against the coronavirus — it was tossed out to the media by chickenshit politicians (like Ron Johnson there) as cheap snake oil to shut gullible people up. The “Left” didn’t buy it. Now we’ve got safe, effective vaccines, we lefties are happily lining up to get those while the righties are inventing conspiracy theories to avoid them. There never was a “war on hydroxychloroquine.” Johnson and every loudmouthed liar on Fox News can go gargle bleach if they want.

It only takes a little distance to see that the way these quacks operate is to tell an outrageous lie, and the first time you hear it, you think “That is the dumbest thing I ever heard.” The second, third, and fiftieth time they say it, you roll your eyes and tune it out. The hundredth time you think, “Am I gonna have to go dig into the scientific literature and read a bunch of papers?” The thousandth time you begin to have doubts and wonder, “Maybe I missed something? Should we fund another clinical trial?”, and then they’ve got you. Trust me, your first impressions were probably correct. Bullshit isn’t turned into science by a thousand Fox News morons churning it over.

Sometimes they even admit what they’re doing. Here’s Chris Rufo outlining their strategy against Critical Race Theory: they just lie about it, misrepresent it, and if they hammer it hard enough at the public, they’ll start to associate the lies with the real thing. 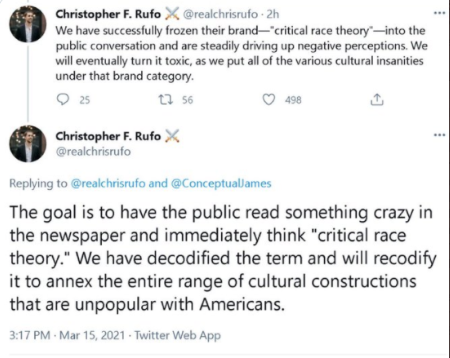 You just have to turn up the volume on your bullhorn and be really, really repetitive and you too can get any nonsense you want drilled into the discourse. If you can’t get on Fox News right away, there’s always Sam Harris and Joe Rogan to act as pre-amps and get you started on your program to purée everyone’s brains via mass media.

I strongly recommend the clarifying effects of watching ocean waves roll in for a while. Unfortunately, I have to warn you of the spectacular downer you will experience when you get back from the shore.