A commenter, BCWebb, mentioned this recent paper, which is mind-blowingly bad. It’s a combination of crackpot physics plus crackpot biology, so it should never have cleared review, but there it is in the Open Access Macedonian Journal of Medical Sciences…oh, wait, which means it may not be peer-reviewed, although the journal claims it is. It has an optional peer review process in which the paper apparently gets published, but a reviewer can email comments that get added to it? I think? Anyway, the paper is titled “A Black Hole at the Center of Earth Plays the Role of the Biggest System of Telecommunication for Connecting DNAs, Dark DNAs and Molecules of Water on 4+N- Dimensional Manifold”. Oooeee, sciencey! Black holes and DNA! Here’s the abstract.

Recently, some scientists from NASA have claimed that there may be a black hole like structure at the centre of the earth. We show that the existence of life on the earth may be a reason that this black hole like object is a black brane that has been formed from biological materials like DNA. Size of this DNA black brane is 109 times longer than the size of the earth’s core and compacted interior it. By compacting this long object, a curved space-time emerges, and some properties of black holes emerge. This structure is the main cause of the emergence of the large temperature of the core, magnetic field around the earth and gravitational field for moving around the sun. Also, this structure produces some waves which act like topoisomerase in biology and read the information on DNAs. However, on the four-dimensional manifold, DNAs are contracted at least four times around various axis’s and waves of earth couldn’t read their information. While, by adding extra dimensions on 4 +n-dimensional manifold, the separation distance between particles increases and all of the information could be recovered by waves. For this reason, each DNA has two parts which one can be seen on the four-dimensional universe, and another one has existed in extra dimensions, and only it’s e_ects is observed. This dark part of DNA called as a dark DNA in an extra dimension. These dark DNAs not only exchange information with DNAs but also are connected with some of the molecules of water and helps them to store information and have memory. Thus, the earth is the biggest system of telecommunication which connects DNAs, dark DNAs and molecules of water.

Whoa. I’m going to have to stop you at the very first sentence. Really? NASA says there may be a black hole at the center of the earth? I had to dig deeper. In the intro it says,

Newly, some scientists who worked in NASA claimed that there is a black hole at the centre of the earth which is the main cause of the high temperature of the core and magnetic field around the earth [6].

6. Riofrio L. Scientist Claims Theres a Black Hole in Center of the Earth. 2019 May 3; https://mysteriousuniverse.org/2019/05/scientist-claims-theres-a-black-hole-in-center-of-the-earth.

Umm, Houston, we have a problem. “Mysterious Universe” is a blog that posts articles about “ancient mysteries”, “ghosts & hauntings”, “cryptozoology”, and “conspiracy theories”. The article itself cites one source, a woman named Louise Riofrio, as a scientist who used to work at NASA, it claims, although no credentials are given and no specific role is mentioned. Thousands of people work for NASA. It sounds like she had a job there for a while and is now citing that vague experience as making her an authority, and using it to tint her wacky crackpot theory as having the imprimatur of NASA. It doesn’t.

Further, “Mysterious Universe” is citing a single source for Louise Riofrio’s idea: a YouTube interview with a site called “thirdphaseofthemoon”, another woo-woo UFO site, titled NASA Insider PROVES Time Travel Is REAL! Black Hole Discovered In Earth’s Core? 2019-2020. It’s just Riofrio babbling about her self-published book that claims her formula, GM=tc3, is equivalent to E=Mc2, and shows that the force of gravity is a function of the age of the universe (t) times the speed of light cubed.

She does not have any evidence that there is a black hole at the center of our planet. She only has kooky theories.

Well look at that. I only got as far as the first sentence of the abstract, and it has already sent me tumbling down a rabbithole to crazytown. I didn’t even get to the biology!

OK, just a little taste of the biology. 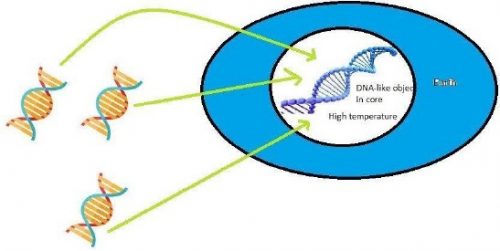 …we should design a model which explains the relationship between earth, water and life. To this aim, we can use ideas of scientists for the existence of a black hole at the centre of the earth. This black hole may be constructed from a DNA black brane with 109 times longer than the core of the earth which is compacted interior of the core. The number of excited states of this object is similar to the number of microstates of a black hole. However, its material is similar to the material of a DNA. This structure produces a temperature around 6000 K which is in agreement with the predicted temperature of the core. Also, this structure is the main cause of the emergence of the magnetic field around the earth and gravitational waves for moving around the sun. We show that DNA black brane of the earth is the biggest system of telecommunications which exchange waves with all DNAs and molecules of water. Also, we introduce a new type of DNAs called dark DNAs on the eleven-dimensional manifold. In fact, on the four-dimensional manifold, DNAs are contracted at least four times around various axes and waves of earth couldn’t read their information. However, by adding extra dimensions, the separation distance between particles increases and all of the information could be recovered by waves.

DNAs in extra dimensions and act like topoisomerases in biology. These waves are different for males and females and also different from linear waves which radiate by electronic devices.

Perhaps you are curious about these different DNAs in males and females, and what this dark DNA is? Don’t ask.

We can write below results from our model and calculations: 1. Molecules of water are in related to dark DNAs in extra dimensions. On the other hand, dark DNAs have gender like normal DNAs.

However, by adding extra dimensions to four dimensions of the universe, the separation distance between elements of DNAs increases and waves of earth could recover their information. Thus, each DNA has an extra dark part in extra dimension which we call them dark DNAs. These extra parts couldn’t be observed, however, their effects can be seen. DNA black brane of the earth’s core exchange waves with both dark and light parts of DNA and connect them. These waves are different for males and females and play the role of topoisomerases in biology.

Wow. So there’s a black hole spinning around the core of the earth, producing a black brane which encodes all this dark DNA, which no biologist has ever found, which is transmitted to life on the surface. There is no evidence for any of it, nor for the idea that water molecules are gendered.

Any physicist want to tackle the physics in this article? I gave up when I found the source, and lost all enthusiasm for addressing the bullshit biology.