Yesterday, one Parasteatoda egg sac popped and sent out a cloud of baby spiders I was struggling to corral. Today, another hatch!

I’m going to be here in the lab for a while. I have to separate these out into individual vials and feed each of yesterday’s spiders. It’s hard work being the Mother of All Spiders. I hope I’ve got enough flies. 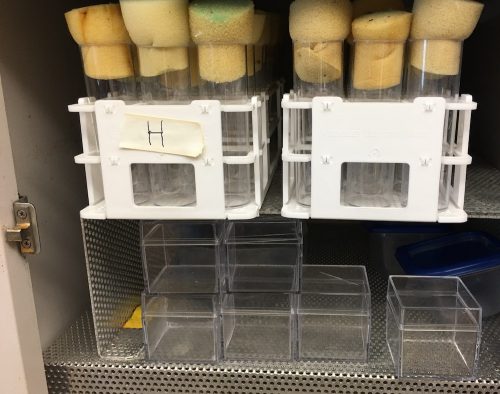 I estimate there are about 160 spiders in all those tubes. I couldn’t possibly put single individuals in each, I don’t have enough space — so there are two or three in each, with 8 or so in the larger cube-shaped containers. I found an efficient way to move them. I’d just hold the container with the whole clutch at a slight vertical angle, and the babies would make their way to the edge and leap off, rappelling downwards, and I’d lower them on their threads into a tube and brush the silk against the lip, and then cut them off with a sponge. It worked well enough that I had no accidents that I noticed, which in part accounts for the larger numbers here over the previous day’s catch.

These, by the way, are called the H line because I caught the mother and egg sac at the Horticulture Display Garden. Mom is fine, she’s in one of the containers, too.

Both of these clutches are from wild-caught spiders found outdoors, which troubles me a bit. I’ve definitely got to get at least one batch from indoor spiders — I’ve got some egg sacs like that right now, but I’ve had a very low success rate from their ilk. Maybe country spiders are more fecund than city spiders?

Reporting from Portland » « That Yoho yahoo got his butt kicked