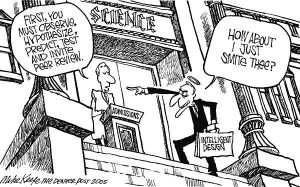 Abby Hafer has pissed off the Discovery Institute. Good.

Hafer is a professor at Curry College who has done two horrible things: she helped draft a bill for the Massachusetts legislature that would require some rigor in what can be taught in public schools — specifically excluding the use of non-scientific materials for instruction in the classroom — and she has written about the lack of rigor in the Discovery Institute’s propaganda. Uh-oh. That’s a one-two punch that hits the DI right in the gut, so they’ve tried to counter it, ineffectively.

First, they tried to defend their strengths and weaknesses tactic, and claim that the Massachusetts bill weakened academic freedom.

As I’ve noted previously, academic freedom laws are very limited in their scope. They do not authorize bringing in material on intelligent design, nor make teachers teach anything differently. They simply provide freedom for teachers and students to analyze the strengths and weaknesses of controversial scientific issues in the curriculum in an objective fashion. They protect teachers and students who want to engage in scientific inquiry, which means examining evidence critically. If science is defined as investigating nature objectively, then they represent the opposite of “science denial.”

Note the bit I highlighted. There is nothing in the bill against the use of evidence, or critical thinking. To the contrary, it requires that ideas be supported by good fact-based, scientific evidence. The DI claims to support that. The problem is that no one considers the religion-based speculations of Intelligent Design creationism to be either fact-based or scientific.

So what does the Discovery Institute do? They decided to attack the author. They explicitly claimed that Hafer is not a biologist, nor a biology teacher in an article initially titled When non-biologists speak to biology teachers, which is easily discredited by simply looking up her credentials. How lazy are the hacks at the DI? They apparently just assumed that only a non-biologist would ever cooperate with their state legislators, and barreled in, guns blazing. It’s revealing that they’d do so little investigating, a quick googling would have revealed the facts, and further, they’re complaining about an article she published in — get ready for it — The American Biology Teacher, which right there on the front page lists her affiliations: “Dr. Abby Hafer is a Professor at Curry College”. Remarkable. That’s how bad the DI’s “research” is.

Furthermore, all the DI does is fund-raising, lobbying, and the production of propaganda, and they want to complain about an imaginary “non-biologist” trying to dictate to biology teachers? They keep killing irony.

When it was pointed out that their leading claims were trivially false, they hastily changed the title and edited the text to obliterate their stupidities. It is now titled When Biologists Speak to Biology Teachers, Cont.. It’s written by Sarah Chaffee, who is the Program Officer in Education and Public Policy at Discovery Institute, not a biologist. It’s revised to follow an article titled When Biologists Speak to Biology Teachers, no Cont., written by David Klinghoffer, who is also not a biologist. It’s kind of obvious that their preference is to have only non-biologists tell teachers what to do, except when the imaginary non-biologist disagrees with them.

What they’re doing in this edited article is complaining about an article Hafer wrote, titled “No Data Required: Why Intelligent Design Is Not Science”. It’s a straight-forward bit of analysis. She asks a simple question, do the papers promoted by the DI include data and reference evidence, or do they cobble together arguments without presenting supporting data? Here’s the abstract.

Intelligent Design (ID) proposes that biological species were created by an intelligent Designer, and not by evolution. ID’s proponents insist that it is as valid a theory of how biological organisms and species came into existence as evolution by natural selection. They insist, therefore, that ID be taught as science in public schools. These claims were defeated in the Kitzmiller case. However, ID’s proponents are still influential and cannot be considered a spent force. The question addressed here is whether ID’s claim of scientific legitimacy is reinforced by quantified results. That is, do they have any data, or do they just argue? The ID articles that I analyzed claimed to present real science, but they rarely referred to data and never tested a hypothesis. Argumentation, however, was frequent. By contrast, peer-reviewed articles by evolutionary biologists rarely argued but referred frequently to data. The results were statistically significant. These findings negate claims by ID proponents that their articles report rigorous scientific research. Teachers will find this article helpful in defending evolution, distinguishing science from non-science, and discussing the weaknesses of ID.

She contrasted the DI’s “work” with peer-reviewed papers published by real scientists. The DI fails on this simple criterion — they don’t talk about the evidence. They’d rather just say there is doubt and debate, instead of backing up their claims.

Now for the hilarious part: that awkwardly revised DI article simply asserts that Hafer’s claims are wrong, and then to show that she’s got it all wrong, it doesn’t show contrary data — it just says that some scientists question neo-Darwinism! We don’t need no data, all we have to say is that there is a debate.

We know that a significant number of scientists worldwide, such as those who attended the 2016 Royal Society meeting on evolution, question the sufficiency of neo-Darwinism in accounting for biology complexity. Yet don’t tell the biology teachers that! Because they might tell their students, and then, Katie, bar the door!

They also clumsily try to apply Hafer’s methods to a classic peer-reviewed paper in science.

Hafer’s method sounds scientific, maybe. But to see how absurd it is, perform the same analysis on the 1953 article by Watson and Crick describing the structure of DNA. Is the seriousness of this work somehow to be gauged by observing that they use the “argu” root once and “data” three times? No, what matters is what the article actually says.

Except the entirety of the Watson-Crick paper is about presenting their evidence for the structure of DNA, and the DI’s analysis actually supports Hafer’s point, that the words used focus attention on the data, not the arguments, and that their result is entirely congruent with Hafer’s analysis. Just to hammer it home, I had to look up the paper to see how they’re using the word “argument”.

The previously published X-ray data on deoxyribose nucleic acid are insufficient for a rigorous test of our structure. So far as we can tell, it is roughly compatible with the experimental data, but it must be regarded as unproved until it has been checked against more exact results. Some of these are given in the following communications. We were not aware of the details of the results presented there when we devised our structure, which rests mainly though not entirely on published experimental data and stereochemical arguments.

Data, results, results, data, stereochemical arguments. Does the Discovery Institute even realize that in this usage “arguments” is being used to refer to stereochemical structures as evidence for their model of DNA?

Everyone at the Discovery Institute is either a fool or a fraud or both.

A new edition of Morris’s own North Star! » « What do Erick Erickson, Glenn Beck, Lindsey Graham, L. Brent Bozell III, and so many others have in common?