James Lindsay, embarrassingly regressive acolyte of the equally embarrassing Boghossian, decided to explain to the waiting hordes of alt-right dopes how the Spaniards conquered the Americas in the 16th century using the Liberalism and Science of the 18th century Enlightenment. They used the vast powers conferred upon them by Humean philosophy, apparently. 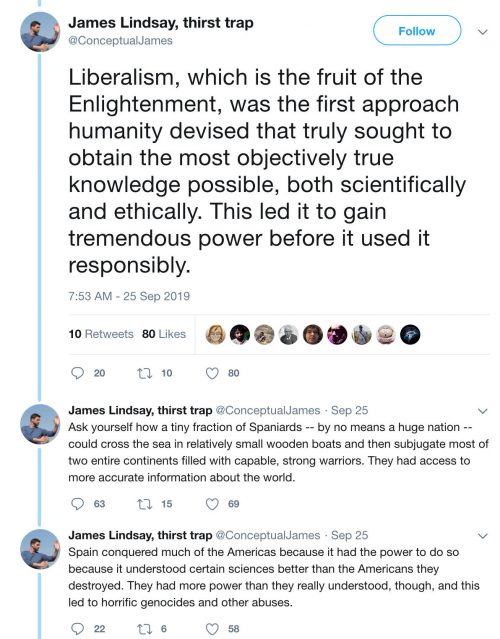 Gosh. I thought Spain used the advantages of gunpowder and horses to murder and enslave populations that were decimated by exotic diseases that Europeans had unthinkingly seeded on the continents, which in itself doesn’t sound like an exactly “enlightened” act. But hey, you know if a different set of Europeans two centuries later invented some useful rationalizations for racism and colonialism (along with some genuinely good principles), and that makes it all A-OK to ahistorical pseudoscholars almost three centuries after that, it must have been a good thing.

I am amused by the idea that fanatical religious conquistadors who thought the native peoples’ autonomy should be disrespected by swords and spears and muskets in their quest for gold and silver were liberals driven by more accurate information about the world. There’s a reason James Lindsay would never make it in academia. He’s even more grossly incompetent than the rest of us.

That’s not us! » « Thunberg Derangement Syndrome