I mentioned a while back that we had this surplus of spiderlings and that we were going to do some measurements of survival under different population densities. Well, we’ve got two weeks of data now, so we can think a bit.

It was a simple experiment: we put different numbers of recently emerged spiderlings in two different sized containers. We had 5, 10, 15, or 20 spiders in containers that were either about 100ml in volume, or 5.7 liters, so spider density ranged from 0.0009 spiders/ml for the big, nearly empty containers to 0.17 spiders/ml in the small overcrowded ones. We’re basically asking how crowded to they need to be to start affecting each other’s survival, and what’s the greatest density we can get away with, anticipating that no matter what, some will die. And the answer is…

Density doesn’t matter. It didn’t matter how many spiders we started with, or whether it was a small or large container, we ended up with 1-3 spiders in a container at the end of two weeks. You start with 10 in a giant container, you end up with about 3; you start with 20 in a tiny box, you end up with about 3. They’re all spaced out, too; we found that individuals tended to occupy different corners, no matter how much room they had. There were no containers which had 100% mortality.

What does that look like? They seem to be murdering their siblings to set up exclusive territories. Ah, the life of an adolescent spider. What it means is that only about 20% of the spiderlings have survived this battle royale so far. Maybe eventually they’ll be reduced to one spider per container. 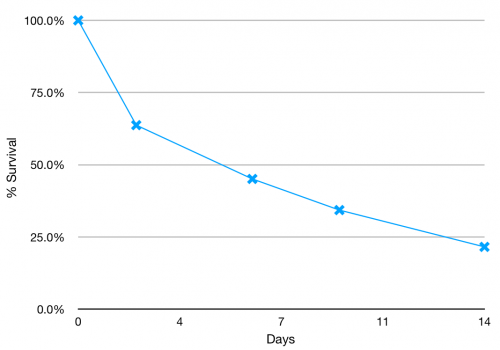 Dang. Next experiment is to set up containers for individual spiderlings to see if that increases the overall survival rate. If it does, then I’ve got to do some more thinking. I can’t possibly accommodate every spiderling produced by a parent, since that would mean I’d have 150n spiders in n generations, with a generation time of about a month, so in a year I’d have 1026 spiders, which would mean I’d have to pack about 1012 spiders per square meter of Earth’s surface area, and I’d have to take over the earth to provide housing for my brood. Oh, man, and all the flies I’d have to raise! Sorry, everyone, I’m going to have to draft everyone on the planet to help maintain my spider colony.

Alternatively, I have two more modest strategies. A) I handpick the small number of spider babies I need to repopulate my colony and maintain the population size, which would require raising their offspring in individual containers. Or B) I put a small number, say 10, spiderlings in small containers, expecting that most will die in a vicious battle royale, and only one can survive in each container. There can be only one! But that one will be the most savage, ruthless spider of the group. It’s mollycoddling vs. natural selection.

Maybe I can do both for a while and see which strategy leads to the healthiest next generation.

One worry is that (B) might lead to the total extinction of all males, since the females are bigger. In nature they can disperse far apart, so we don’t have as much fratricide/sororocide, other factors will cull them. Get males from population A, and females from B? This sounds like another experiment.

The J-F Gariépy/Epstein connection » « You can’t make it to Dragon Con, either?