The story of this experiment where octopuses were given a hit of Ecstasy (MDMA) is all over the interwebs right now, but not very many people have bothered to read the original paper, given the weird twist it’s been given, that these bored scientists were giving their pets drugs to see what they’d do. That isn’t the case at all. The first part of the paper is all about sequence analysis of the serotonin transporter gene SLC6A4 (the gene that is affected by MDMA), and a comparison of the gene in different phyla. This research starts with some serious, detailed work on the functional mechanics of the gene. If you want to study the role of serotonin in mood and behavior in humans, comparative work of this sort is essential if you want to puzzle out which bits and pieces of the gene are important.

The starting point of this work is the phylogeny, which tells us that serotonin is an ancient transmitter, and that many of the elements of its signaling process are evolutionarily conserved. It should also tell you that its history is complicated, because there are a lot of duplications and subtle variants. 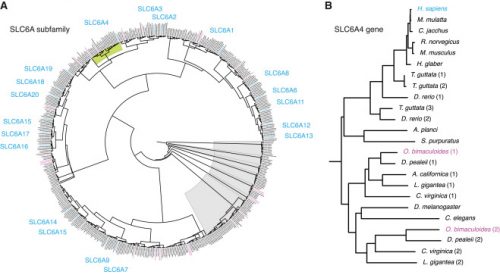 We know, though, from the molecular work that the octopus has an SLC6A4 gene, and further, that the portion of the gene that binds to MDMA has been conserved. The next question, then, is to ask how this gene modulates octopus behavior. That’s when the test of exposing them to MDMA was proposed.

Of course, you don’t just give animals the drug and watch to see what happens. You’ve got to have a hypothesis. In this case, prior observations, much of it informal, in a different model system, Homo sapiens, was used to infer that MDMA exposure might increase social behavior (“I love you, man”), so they designed an experimental setup to directly test that behavior. Here it is. 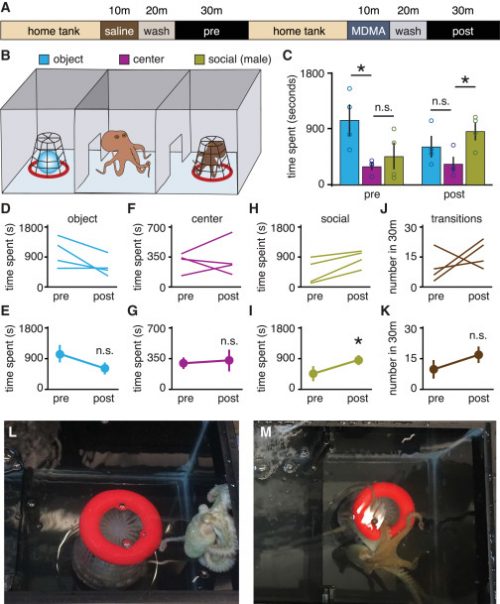 The design is straightforward: since you can’t ask an octopus to explain the sensations they feel under MDMA, you give them a choice. They have a 3-chambered box, and they put the octopus they were testing in the center box. On the left, there is an object, a toy they can explore. On the right, there is another octopus, an opportunity to socialize. Will they prefer an inanimate object they can tinker with, or to approach a conspecific?

In observations without any drugs, they determined that, as expected, octopuses are relatively solitary animals — in part because nobody likes the males. Both male and female subjects spent most of their time in the central chamber, but would spend more time in the social chamber if the octopus there was a female, but if it was male, they were suddenly much more interested in hanging out with the object.

Nevertheless, somewhat surprisingly, both male and female subjects did exhibit social approach to a novel female conspecific, a finding that may reflect an adaptation of laboratory raised animals or an incomplete ethological description of the full repertoire of social behaviors in the wild. Although we cannot rule out the possibility that the female versus male social object preference effect is governed by relative size differences between subject and social objects, we think this is unlikely since we observed aversion to a male social object both when the subject was greater and smaller in size.

I’m just going to assume that the male aversion was because males are assholes, which is apparently a phylogenetically ancient trait.

What they clearly saw, though, was that under the influence of MDMA, the subject octopus switched to expressing a far greater interest in exploring the social object, whether it was a male or female. The animals responded to the entactogenic properties of the drug, an interesting observation that suggests that this is also a phylogenetically ancient trait.

A word of caution, in interpreting these data: there has been a tendency lately to cherry-pick examples of complex animal behavior to justify specific human social structures. What this work tells us is that there are conserved biochemical pathways that are regulated to trigger behaviors along a continuum — that diverse animals use serotinergic pathways as a kind of slider control, that can be ramped up to increase cooperative, social behavior, or tuned down to increase aggressive, asocial behavior. That this kind of neural regulative control exists, is conserved, and has deep roots in animal evolution cannot be used to argue that humans are naturally supposed to build capitalist dominance hierarchies any more than it can be used to claim that humans are adapted to live in cooperative communes full of peace, love, and understanding. The pathway is present in animals with diverse behavioral patterns.

Monoamine transporters, including human SERT, DAT, and NET, appear to be a bilaterian innovation, suggesting a possible ancient evolutionary role in nervous system centralization and elaboration, both hallmarks of the Bilateria, and the families have undergone complex patterns of gene duplication and loss throughout the clade over time. Phylogenetic analysis revealed clear orthologs of human SLC6A4 in octopuses, as well as high levels of conservation in the transmembrane domain and amino acid region critical to MDMA binding. Interestingly, we found that SLC6A4 is broadly conserved in the fruit fly, the worm, and most other bilaterian animals but is surprisingly absent in both of the eusocial hymenopteran insects, the honeybee and leaf cutter ant.

I’m sure that warning won’t stop everyone, though. I also expect that there will be some humans using it to argue that we all ought to be taking more E, a position that the research does not endorse at all, either.

One last thing I want to mention is a bit from the methods section (yeah, I read the methods): cephalopods are completely exempt from the ethical regulations for the care of laboratory animals, but the investigators followed them anyway.

Care of invertebrates, like O. bimaculoides, does not fall under United States Animal Welfare Act regulation, and is omitted from the PHS-NIH “Guide for the Care and Use of Laboratory Animals.” Thus, an Institutional Animal Care and Use Committee, a Committee on Ethics for Animal Experiments, or other granting authority does not formally review and approve experimental procedures on and care of invertebrate species, like O. bimaculoides, at the Marine Biological Laboratory. However, in accordance with Marine Biological Laboratory Institutional Animal Care and Use Committee guidelines for invertebrates, our care and use of O. bimaculoides at the Marine Biological Laboratory and at Johns Hopkins University generally followed tenets prescribed by the Animal Welfare Act, including the three ‘Rs’ (refining, replacing, and reducing unnecessary animal research).

You can’t punch a kitten with a meat hammer, but you can do it to an octopus, if you want, which seems backwards to me. No! I mean, you shouldn’t be allowed to punch any animal with a meat hammer in the name of science. But once again, our laws are inconsistent and arbitrary.