The Republican attitude towards education is taking an abrupt plunge, which is both unsurprising and unfortunate. 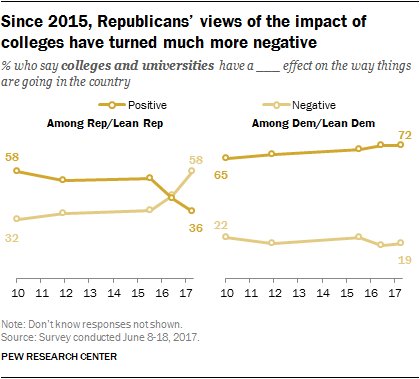 It’s unsurprising because Republicans have been the anti-education party for as long as I’ve been alive — this is what they do, hatin’ on those damned hippie elitists and their uppity airs, and also, as the Republican party fuses with the religious right, they figure going to college is the fast track to atheism and ultimately, hell fire. So they rail against education, and now it’s reached the point where it is going down faster than ever: They rage against education, so when they don’t do well in college they blame the institution, so they rage further, fueling more disaffection, leading to poorer performance, und so weiter. Students improve when they see a path to correcting their own deficiencies; they do more poorly when they find an irrelevant scapegoat. And Republicans are all about the scapegoating.

It’s unfortunate because this is the 21st century and a technological society that depends on maintaining an edge in their beloved capitalist competition with the rest of the world, and they’re going to throw it all away out of spite and ignorance. But then, the Republican have become the party of spite and ignorance ever since Saint Reagan. They’re going to tear it all down for the rest of us, too.

Mary’s Monday Metazoan: A conveyer belt with teeth » « The descent of the History Channel continues