I’m sure that by now most of you have seen The Photo that the History Channel purports supports a hypothesis that Amelia Earhart was captured by the Japanese navy in 1937. I hope you will all join me in a resounding chorus of “BULLSHIT!”

This is a blow up of the relevant portion of the photo. The person seated with their back turned to us is supposed to be Earhart. 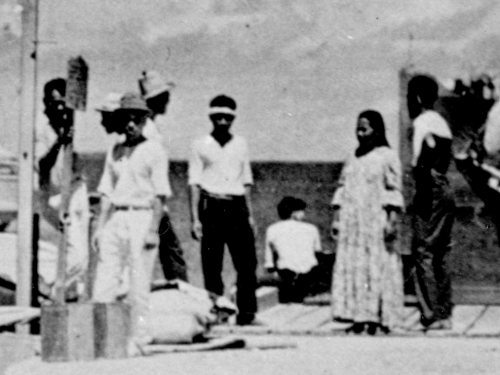 Not only is that supposed to be a photo of Earhart, but the ‘investigators’ can detect her mood.

They obviously believe that they’ve been rescued, Gary Tarpinian, the show’s executive producer, tells NPR. However, the word came back from Tokyo that … we can’t let her go. I’m not sure why. Did she see something she shouldn’t have seen? Did they think she was spying? Who knows? We can only speculate. But somewhere between when she thought she was rescued and after that photo, she was held captive and she was brought to Saipan.

How can they infer all this? Somehow, I think their analysis consisted of scanning the photo into a computer and shouting “ENHANCE” at it. All bullshit.

Here’s a good debunking of this stupid hypothesis. It’s not bullshit.

An autocatalytic negative feedback loop in the Republican party » « Every time. Every time the Catholics make up nonsense.