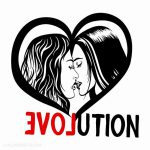 I guess everyone is going to be doing this now. In this case, it’s a ridiculous paper accepted for publication in the journal Personality and Individual Differences, and it’s a doozy. It’s about evolution, it says.

In the introduction, it throws around some buzzwords and tries to impress us with elementary scientism.

New alleles can arise from mutations. An allele’s influence on a trait is likely to have both negative (c) and positive (b) fitness effects; thus, the allele will increase in frequency if the balance of positive minus negative fitness contribution (b – c) i.e., the net fitness effect (f), is higher that the respective balance of the original gene, and it will decrease in frequency if the balance is negative. Please note that we refer here to the case averaged across all bearers of the allele, so that an allele will be favored even if it has a net negative effect on the fitness of some individuals as long as it has a net positive effect on the fitness of other bearers of the allele.

The joke’s on you if you read this assuming the paper is about genetics, though. Nowhere in this work do the authors identify any genes or alleles; they don’t even try. They just assume that if a behavior exists, there must be a gene for it, and further, it must have undergone positive selection. They’re also not going to test for fitness of a behavior; in fact, they’re not even going to examine any behaviors directly, but are instead going to rely entirely on self-reported assessments in an online survey of college students.

You’ve probably figured out by new that the discipline in question is evolutionary psychology. Just to titillate you further, it’s arguing for a selective advantage for same-sex behavior.

At first sight, alleles that arise through mutation and predispose for same-sex attraction appear to experience a substantial negative fitness, since they lead individuals to divert part or the whole of their mating effort toward same-sex outlets from which children, who would carry these alleles, cannot be borne. Accordingly, in order to understand the prevalence of same-sex attraction in the population, scholars have argued that these alleles also experience positive fitness effects, which compensate for the negative fitness effects, turning the net fitness (f) positive. There is, however, a different possibility.

Oh, boy. How could a sexual behavior persist that diverts mating efforts in a direction that does not produce children? It’s a mystery.

But wait! There’s more hilarity! This is a paper about “The evolution of female same-sex attraction”. Where did lesbians come from, they wonder. What a conundrum! Why would women prefer each other’s company, rather than a man’s? Lesbians can’t put a baby in their tummy! They resolve this problem easily, by suggesting that men provided the selection pressure to favor lesbian genes. It’s all about the cucks.

Men with multiple wives, as opposed to men with one wife, face an elevated probability to be cuckolded, because they have to divide their sexual effort toward several wives so, inevitably, some of their wives will remain unsatisfied. They also have to divide their mate-guarding effort between multiple wives, which makes such effort less effective. If their wives experience same-sex attraction, they can satisfy their urges with other co-wives, who are readily available, reducing, in effect, the risk of cuckoldry (see also Kanazawa, 2016).

Note the Kanazawa reference — another in-joke. This paper is hilarious. There’s also another reason lesbianism is evolutionarily advantageous.

In our proposed theoretical framework, men can benefit from the same-sex attractions of their partners through gaining access to additional women.

That’s right, guys: you should date lesbians because then you’ll get to have sex with their lesbian girlfriends. Yeah, that’s exactly how it would work.

Now you might argue that the fact that this hypothesis is counter-intuitive and is built on a framework of not understanding basic evolutionary theory does not necessarily make it wrong, but maybe they’ve got some kind of empirical evidence that cleverly illustrates the existence of this lesbianism gene, and that men are actively selecting for it.

The ‘experiment’ is basically, “let’s ask guys if they’d mind if their wife had sex with another woman.” I’m not kidding. That’s the experiment. It’s also done with an online survey, because they could get more honest answers in this way.

Here are the results. It shows that a minority of Western men (Greek Cypriots) like the idea of girl-on-girl sex, but that they like it more than women like the idea of boy-on-boy sex. Apparently yaoi isn’t very popular on Cyprus…but shouldn’t the cultural variations clue them in that this is probably not a genetically determined behavior?

To be fair, they do consider that there might be cultural effects, but all they can think of is one factor, religion, and they only argue that it would repress honest expression of the participants’ views.

Last but not least, the observed effects are unlikely to reflect only evolved dispositions, and social and cultural effects may also be at play. For instance, male preferences for same-sex attraction in a partner may be moderated by religious beliefs. Participants in the sample were Greek-Orthodox Christians, and in the Cristian religion same-same attraction is considered reprehensible. Accordingly, male participants may have perceived their preferences for same-sex attraction to be inconsistent with their religious beliefs, and if they were very religious, to have suppressed or have been unwilling to report such desires. The present study did not control for this possibility, and future research can do so by measuring participants’ religiosity.

Or maybe the authors need to go back to school and learn how evolution works.

This paper was so ridiculously bad, though, I’m sure the authors are going to come out with a confession, maybe in the pages of Skeptic magazine, that it was all a set-up to show how absurd the entire field of evolutionary psychology is (I checked; there isn’t a single evolutionary psychology journal in the top 100 of the SCIMago rankings, therefore the field is entirely made of low-quality papers).

Any moment now they’re going to pop up and say, “Just foolin’!”