David Brooks is criticizing Donald Trump in the New York Times. The world is being led by a child, he says. We’re supposed to give a damn what David Fucking Brooks is saying, because finally he’s becoming aware of a problem.

By Trump’s own account, he knows more about aircraft carrier technology than the Navy. According to his interview with The Economist, he invented the phrase “priming the pump” (even though it was famous by 1933). Trump is not only trying to deceive others. His falsehoods are attempts to build a world in which he can feel good for an instant and comfortably deceive himself.

He is thus the all-time record-holder of the Dunning-Kruger effect, the phenomenon in which the incompetent person is too incompetent to understand his own incompetence. Trump thought he’d be celebrated for firing James Comey. He thought his press coverage would grow wildly positive once he won the nomination. He is perpetually surprised because reality does not comport with his fantasies.

Driftglass is as appalled as I am, and puts it well.

What Mr. Brooks is describing — a toxic fantasy world built on “falsehoods” which permit the inhabitants to “comfortably deceive” themselves, but which is also perpetually under threat of collapse “because reality does not comport with [their] fantasies” — not only perfectly describes Mr. Brooks’ Republican Party as it has existed for most of my adult life, but also perfectly describes the reams of Whig Fan Fiction bullshit that The New York Times has paid Mr. Brooks a princely sum to extrude over the past 13 years.

Whig Fan Fiction in which the Republican Party as it has existed for most of my adult life — the Party of Trump and Palin and Bannon and Rove and Lee Atwater and Jerry Falwell and Pat Robertson and Sean Hannity and Bill O’Reilly and Rush Limbaugh and Laura Ingraham and Ann Coulter and Ralph Reed and Roger Ailes and Newt Gingrich … and … and … — simply does not exist at all.

And so we have once again arrived at exactly the same place we were back in 2006-07. Back when the comfortable, toxic deceit of BushWorld — in which these very same pundits and this very same Republican base lived together under one roof, happily chugging Cheney-brand Kool Aid and slandering people like you and me — began to collapse under the weight of relentless Reality. And just as happened back then, we now see exactly the same, frantic ideological plea bargaining from the same paid professional Conservative/Both Siderist Beltway creatures. That the problem is somehow just Trump (David Brooks.) Or it’s because Trump is not really a Republican (Joe Scarborough, on MSNBC every fucking day.) Or it’s The Extremes on Both Sides (all the usual suspects).

This is the problem. We believe that the entire Trump administration ought to be sealed up in a box and buried in a landfill somewhere because they are incompetent and evil, but at the same time we respect the rule of law and see the Constitution as a good reason to hold back and work through responsible institutions to restore reason to government. And what if we ignored the US Constitution and did what was right? We already know the answer.

The New York Times, as one example of our media, is not bound by our constitution to respect the will of the people and the law. They have on their masthead a large number of people who were criminally irresponsible in cheerleading our way into a bloody futile war. You would think that after that debacle, the management would have looked at their staff and said, “My god, you’re a gang of fucking incompetents who got everything wrong, and wrecked the reputation of our newspaper. You’re fired! Let’s hire instead more of the people who got it right.”

That did not happen, obviously.

Those same people, David Fucking Brooks among them, are still there, and were happily churning out “tut-tuts” and “Hillary’s emails” and “both parties are the same” throughout the last election, and have helped sink us into yet another disastrous mire of bad policy that will kill people. Poor people, mostly, not the kind who’d subscribe to the NY Times, so I guess it’s OK. The pundits’ jobs are not at risk at all, ever. Those cretins can be wrong over and over, and never pay a price.

It’s the rest of us who pay.

It’s not just the NY Times. CNN is criminally incompetent, too — Wolf Blitzer is a caricature of a television presenter. MSNBC, the so-called “liberal” news channel, just hired George Goddamn Will, whose greatest claim to fame is that he can describe horrors with the same bland lack of affect he uses when picking his bow tie in the morning. These are people who, if their performance was judged on merit, would be laughed off the air and out of print — who might, at best, be reduced to writing for World Net Daily, Breitbart, or Weekly World News, but would most definitely not be on the payroll of the ‘prestigious’ news media. But there they are. 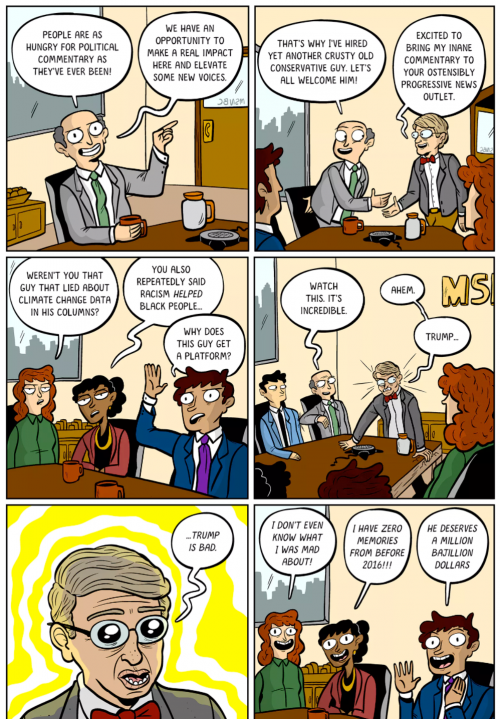 Once again, the frauds who ought to be superannuated ragpickers are rewarded with another sinecure.

The Republic is doomed, because if we can’t get rid of those losers, how are we going to get rid of parasites now roosting in the secure shelter of the Constitution?

Sarah Kendior rips on graduate school » « What happened to octodon.social?