I live in Minnesota’s 7th congressional district. Our representative is a Blue Dog Democrat, Collin Peterson.

I never voted for the guy until the last election, when I held my nose and punched his name in the voting booth because the Republicans have become the party of intransigent ignorance and bigotry, so even Peterson looks good in comparison. Unfortunately, I think he relies too much on the odious nature of the opposition to skate by.

And then I looked at the Facebook page for the Minnesota 7th Congressional District Republican Party. They really hate Collin Peterson. They think he’s a liberal, dont’cha know. By comparison with the poison they spew, I guess he might be.

What brought me to look at their page was that I learned that the 7th district Republicans, my neighbors, had posted this: 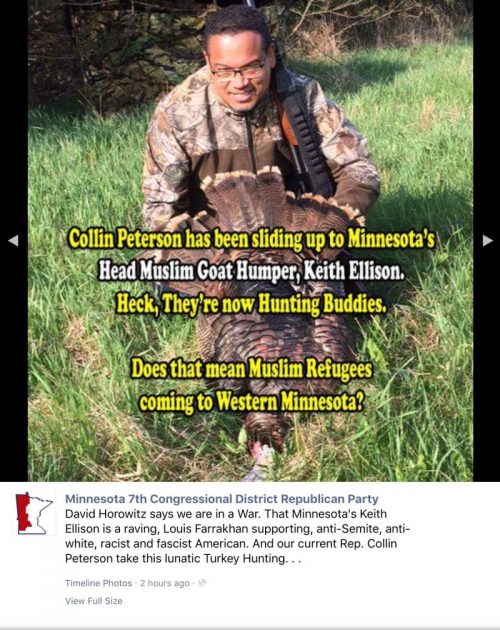 Head Muslim Goat Humper? Seriously, dudes? Can you get any more racist?

Worst thing about it: now I’m going to have to vote for Collin Peterson, or whatever Blue Dog substitute comes along, again, and it left a foul taste in my mouth last time.

And now for something truly controversial » « Racists love to cooperate: Sam Harris and Charles Murray