I know, I’m getting a reputation as that guy who hates Elon Musk (I don’t, I hate hype), but his latest is just too much bullshit. He has bought a company called Neuralink, which has the goal of creating brain-machine interfaces (BMIs). OK so far. These interfaces are cool, interesting, and promising, and I’m all for more research in this field. But Musk gets involved, and suddenly his weird transhumanist-wannabe fanboys start hyperventilating. I double-dog dare you to read this puff piece, Neuralink and the Brain’s Magical Future. It begins roughly here, with the claim that Musk is going to build a Wizard Hat to make everyone super-smart:

Not only is Elon’s new venture—Neuralink—the same type of deal, but six weeks after first learning about the company, I’m convinced that it somehow manages to eclipse Tesla and SpaceX in both the boldness of its engineering undertaking and the grandeur of its mission. The other two companies aim to redefine what future humans will do—Neuralink wants to redefine what future humans will be.

The mind-bending bigness of Neuralink’s mission, combined with the labyrinth of impossible complexity that is the human brain, made this the hardest set of concepts yet to fully wrap my head around—but it also made it the most exhilarating when, with enough time spent zoomed on both ends, it all finally clicked. I feel like I took a time machine to the future, and I’m here to tell you that it’s even weirder than we expect.

But before I can bring you in the time machine to show you what I found, we need to get in our zoom machine—because as I learned the hard way, Elon’s wizard hat plans cannot be properly understood until your head’s in the right place.

I dared you to read it, because I’ll be surprised if anyone can plow through it all: it goes on for almost 40,000 words (I know, I pulled it into a text editor and confirmed it), and that doesn’t count all the crappy little cartoons scattered through out it. When the author says you cannot properly understand it without putting your head in the right place, he means you have to start with sponges and be lead step by step through a triumphalist version of 600 million years of evolutionary history, which is all about a progressive increase in the complexity of brain circuitry. It’s an extremely naive and reductionist perspective on neuroscience and intelligence that presumes that all you have to do is make brains bigger and faster to be better, and that computers extend the “bigger” part but are limited by the speed of interfaces, so all we have to do is improve the bandwidth and we’ll be able to battle the AIs that Musk thinks will someday threaten to rule the world.

All the verbiage is a gigantic distraction. It’s virtually entirely irrelevant to the argument, which I just nailed down for you in a single sentence…without bogging you down in a hypothetical history of flatworms and a lot of simplistic neuroscience. He summarizes Elon Musk’s glorious plan in yet another crude cartoon: 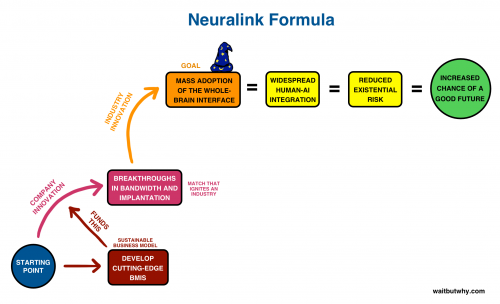 It is accompanied by much grandiloquent noise and promises of planetary revolutions, but what needs to be asked is “How much of this is real?”. The answer is…pretty much none of it. We are currently in the little blue ball at the lower left labeled “starting point”, and Musk has bought a company that is doing tentative, exploratory research on building BMIs (I guess that this whole field is new enough that they are all, by default, “cutting edge”). Everything else in the diagram is complete fantasy. Elon Musk has bought a company, and is cunningly trying to inflate its value by drowning the curious in glurge, techno-mysticism, and making shit up, which, because he has this mystique among young male engineers, will probably succeed in making him more money and fame, without actually doing anything in the top two thirds of that cartoon.

I do rather like how the third step is “BREAKTHROUGHS in bandwidth and implementation”. You could replace it with “And then a miracle occurs…”, and it would be just as meaningful.

Let’s add a little more reality here: Musk has a BS in physics and economics, and started a Ph.D. in engineering, which he dropped out of. He has no education at all in biology or neuroscience.

Another shot of reality: he’s buying this company in collaboration with Peter Thiel’s venture capital company. You remember Thiel, right? Wants to prolong the life of old rich people by transfusing them with the blood of the young? Libertarian acolyte of Ayn Rand who is now advising Trump on policy? If you think this is a recipe for a post-Singularity paradise, looking at the people backing it ought to tell you otherwise.

So why are these filthy rich people getting involved in this nonsense? Let’s ask Elon.

Long Neuralink piece coming out on @waitbutwhy in about a week. Difficult to dedicate the time, but existential risk is too high not to.

They’ve imagined a huge, shadowy existential risk which does not exist yet — you might as well drive your decisions by the possible threat of invasion by Mole People from Alpha Centauri (oh, wait…they also fear aliens). They don’t know how AIs will develop or what they’ll do — nobody does — and they lack the competencies needed to guide the research or assess any risks, but they’ve got a plan for generating all the benefits. These guys are as terrifying to me as the Religious Right, and for all the same reasons.

They have fervent worshippers who will vomit up 40,000 words based on inspiration and wishful thinking, and then wallow about in the mess. It’s possibly the worst science writing I’ve encountered yet, and I’ve read a lot, but still, take a look at all the commenters who want it to be true, and regard grade-school and often incorrect summaries of how brains evolved to be informative.

Friday Cephalopod: We was so poor, all we’d have to eat is the shell of the crab » « Another con wrecked by casual sexism