Yesterday, I mentioned that creationist conference in Istanbul. There wasn’t much to say about the content of the event, but they did have photos of some of the displays, that looked exactly like the nonsense published in Harun Yahya’s Atlas of Creation. But now I’ve got an essay from one of the speakers, Oktar Babuna. I’m sorry to say he’s another data point damaging the reputation of good doctors everywhere.

A Turkish anchorman, neurosurgeon, and doctor of medical sciences, Oktar Babuna, exposes the absurdity of Darwinism by scientific evidence and explains the reason why this preposterous theory is promoted almost everywhere world-wide.

Between Michael Egnor and Oktar Babuna and Ben Carson, I’m hoping I never have a brain injury, because the profession seems to be a magnet for vapid nitwits.

He has the usual ignorant creationist arguments against Darwinism.

Darwinism is absurd because it proposes that life emerged by coincidence

and that human beings are a mere animal species.

We are animals (although not “mere” — biologists value every species, including our own). What definition of “animal” do the creationists have that somehow fails to include humans?

He tries to back up those assertions with the usual creationist “ooh, big numbers” approach: proteins are assembled from thousands of amino acids, humans have trillions of cells, therefore it’s all just too complex to have been constructed, except by one really smart engineer. This is a fallacious argument. You might just as well look at a beach, notice there are an awful lot of grains of sand out there, and decide that they are so numerous that they must have been placed there, one by one, by a very finicky deity. Every beach is an artisanal beach. Or you could just read Ian Musgrave’s brief introduction to abiogenesis and get the stupid smacked out of your head.

Then he makes the standard Yahya argument. They all look the same to him.

If we look at the beginning of life on Earth, the first cells emerged all at once. For example, the first cell was a cyanobacteria, a cell which exists even today and produces oxygen through photosynthesis. This cell emerged and remains the same cell. All species – from elephants to tigers, plants, fish, and reptiles – appeared all at once and never really changed. There is no evolution.

Ho hum. This is the fallacy of looking at a twig and declaring that there are no branches or trunks, the tree is a twig all the way down. All the things he mentions have known antecedents in the fossil record that are different from modern forms. 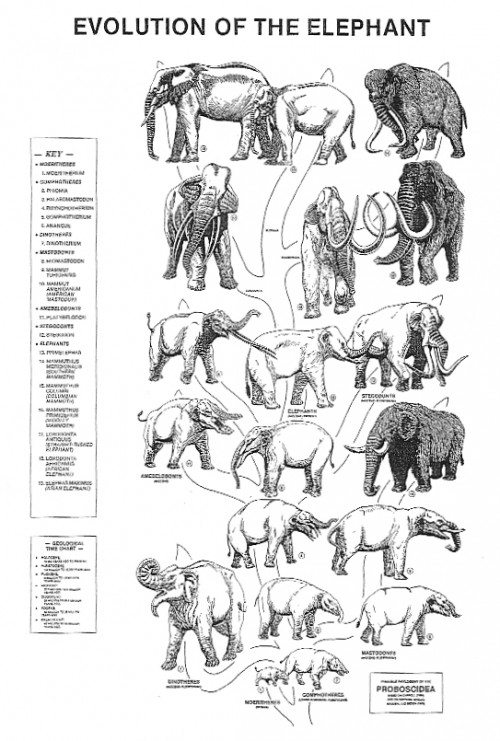 Don’t worry, though, Babuna doesn’t waste much time lying about the evidence. He’s got better things to do, like lying about our motives.

So, we can ask: why is this theory supported world-wide? Because evolution is atheism. The reason why Darwin is defended by so many scientists all around the world is in order to keep atheism alive. But this didn’t start with Charles Darwin. The idea that life appeared by chance goes back to the Sumerians, Ancient Egypt, and Ancient Greece. This is the beginning of materialism.

Charles Darwin was not an atheist. He was agnostic. He had no plans to promote atheism, and was actually reluctant to publish in part because he knew what controversy would arise, and in part because he was uncomfortable with contradicting religion’s explanations. Babuna reverses causality here. Atheism didn’t create evolution, but evolution was compatible with atheism, and modern atheism actually uses the scientific evidence to support the idea that gods are unnecessary.

You know what’s coming next, right? It’s so predictable. Hitler.

In Russia, Turkey, the US, and any other country, there is a dictatorship of Darwinism in all universities and schools. Darwinism implants the idea that humans are fighting-animals which have to struggle to survive. If you are strong, you will survive, but if you are weak, you will be eliminated. This is the selfish struggle of Darwinism. This selfishness takes law away from the world and provokes all kinds of violence, terrorism, and fascism. Karl Marx said that evolution is the basis of Marxism’s natural history. Hitler also put the foundations of fascism on Darwinism. When we look at terrorist groups such as ISIS, Al-Qaeda, Boko Haram, etc., these groups emerged for two reasons: religious ignorance and Darwinism. These people need to be educated.

No, evolution accommodates many strategies for survival, not just kill or be killed. Cooperation is just as viable as competition. You don’t need to physically eliminate your competition if you can outbreed them. Species and communities matter.

The relationship between Marxism and evolution is ambiguous and complex. On the one hand, Marx did appreciate the materialist approach; on the other, Marxism wants there to be an arrow of progress that can be consciously directed, something not present in evolutionary theory. Marx also saw Darwin’s version of evolution as more than a little bourgeois, appropriate for a nation of shop-keepers.

Hitler was anti-evolution. He banned Darwin’s books. The foundation of his ideology was God and the state, and he said so repeatedly in Mein Kampf, and religion was a staple of Nazi propaganda. Kinder, Kuche, Kirche!

But how can anyone take someone seriously who claims that ISIS, Al-Qaeda, and Boko Haram are rooted in Darwinism?

I guess that would be the kind of person who thinks religion consists only of good things, so anything bad must, by definition, be the spawn of satanic atheism.

Darwinism has taken love away from the world. It brings selfishness; it sees human beings as animals which can and should kill other animals. If we look at the three major religions –Islam, Christianity and Judaism – they all say that God created all human beings and all other living things with love. Love is the essence of religion. Love will come back to the world with religion. We hope that, with scientific struggle, Darwinism will go away with its egoism and lawlessness.

See? Boko Haram cannot be a religiously motivated terrorist movement, because religion is only about love. Darwinism is all about killing animals, which includes humans, therefore Boko Haram is a Darwinist organization.

With logic like that, how can you not trust Oktar Babuna with a scalpel and your brain?