The paper leaves no room for ambiguity. 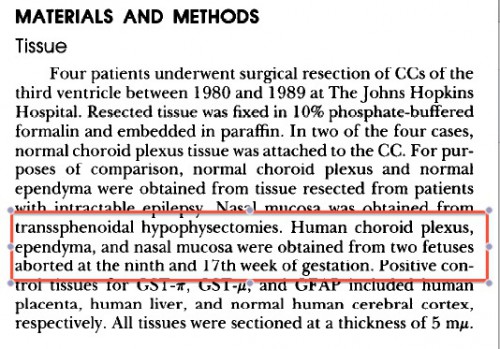 Note that there’s nothing at all wrong with this — the use of fetal tissue in these kinds of experiments, and many more, is ubiquitous, and it is not obtained by magic, but by the ethical donation of fetal material from abortions and miscarriages and stillbirths. I don’t object at all to Carson having participated in this kind of research.

I do object to him now declaring that it is unethical in all circumstances.

Oh, wait. Except he’s suddenly backpedaling in all kinds of directions.

The Washington Post picked up Gunter’s story and contacted Carson for comment. He told the newspaper that his intent made his research acceptable, and that his opposition is to killing babies and taking the tissue, that’s a very different thing than taking a dead specimen and keeping a record of it.

Carson told the Post that pathologists and researchers were not responsible for the origin of the tissue they worked with, and according to the newspaper, Carson said that he did not believe fetal tissue research was immoral or that it should be illegal. He also said research like his had medical and scientific value: It’s one of the reasons why at the turn of the last century, the average age of death was 47. Now, the average age of death is 80. Using the information that you have is a smart thing, not a dumb thing.

So now he’s coming out and admitting that this research with fetal tissue has had an important and positive effect on medical progress, and that his intent made his use of fetal tissue ethical.

OK, then, let’s accept that. Then what he’s saying is that we should allow research on fetal tissue, because it works, and because the hands of the scientists doing the work are clean.

I look forward to his change of tune on fetal tissue research in the immediate future.

I am now officially on vacation » « She keeps battering me with data! Make her stop!