Mary Kay Letourneau died of cancer on July 6, 2020.  She was a schoolteacher who in 1997 raped her 12 year old student, Vili Fualaau. She was convicted of the crime, but given only a six month sentence.  She violated a “no contact” order and became pregnant by Fualaau a second time, whereupon she was sentenced to seven years in prison. She later married him, they divorced in 2019.

This was a case of the guilty and the victims, and no winners.  But it’s not her crime and death on my mind. It’s society’s hypocritical reaction to it, in two different forms.

When there are cases of adult males raping children, you’ll hear threats of violence along with the outrage. “Castrate and kill the SOB!” is a common response. And when it’s teachers raping students, the outrage is about the betrayal of trust.

So where was that outrage when Letourneau raped Fualaau?  There was very little.  Many of those who threatened to kill male violators turned Letourneau’s crime into an adult male’s sick sexual fantasy. “He got lucky!” “Any guy would be glad to be in his shoes!” They say it all the louder when the woman involved is young and is considered attractive.

When males voice that opinion, especially talking heads on TV, it tells me they’re as much a danger to children as anyone who has raped a child. Letourneau’s crime was her sexual fantasy. How is it different when males talk and joke about it?  Rape harms children, no matter who the perpetrator is.

Second: The hypocrisy of news coverage and social discussion.

Can you name five adult male teachers who raped their students and became infamous for it? I can’t, even though such crimes happen with great frequency.

How many women teachers can you name who raped students and their names were plastered across the media? Search google for “woman teachers who slept with students” and you’ll find dozens of pictures, dozens of names. One link entitled “500 Female Teacher Sex Offenders – Female Teacher Sex Crime Cases” came from the Canadian Children’s Rights Council, a site that shouldn’t be glamourizing this crime or portraying it as a “female problem”.  But it certainly looks like it is.

The news media constantly focuses on the “danger of women teachers” to the exclusion of males who are far more likely to be predators. When I searched for “male teachers who slept with students” HALF of the pictures shown were women. This doesn’t happen by accident. 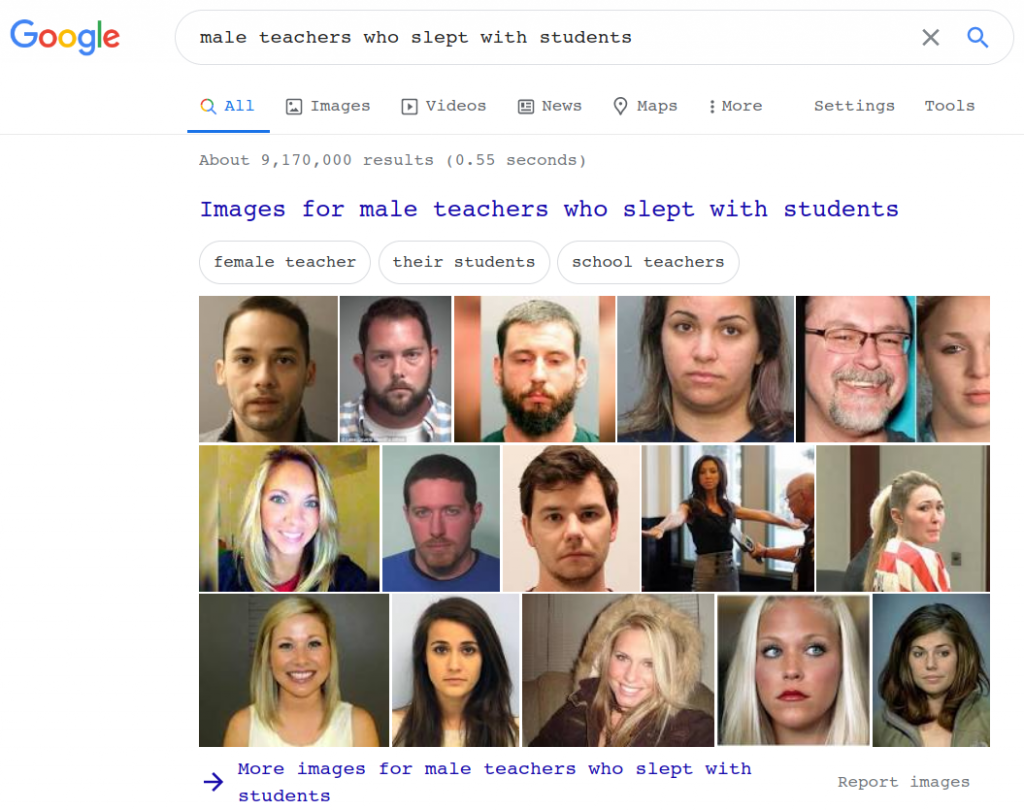 Putting Out: TISM’s most famous song was released in July 2005 » « I Cried: Over a two minute stop motion Godzilla film