Over at Gamespot, Kevin VanOrd – one of gaming’s best writers – “broke consensus” by giving Arkham Knight 7/10. Many other places are giving it much higher scores, including a perfect 10 at Polygon. They did a video talking to Kevin about why he did so (even though you can read the review itself to find out why.)

I noticed this comment and it kind of perfectly encapsulates what is so wrong with so many gamers’ responses to criticism. 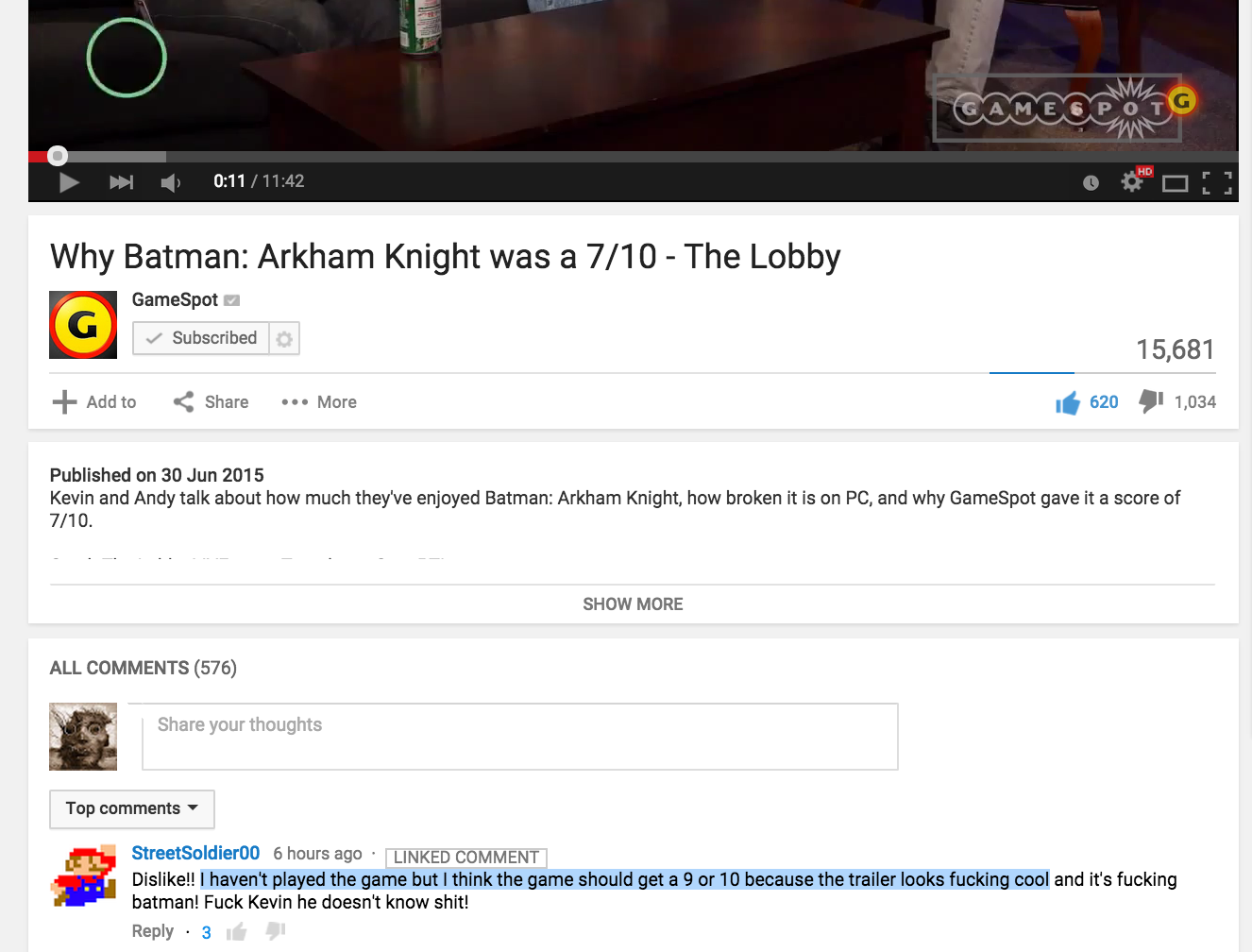 Yes: A person who admits to not playing Arkham Knight thinks it should get a higher score, based on a trailer. Because, I guess, trailers are never created to show off the best parts of the game, running perfectly smoothly, with the right set pieces, by a huge corporation’s marketing team. It’s not like it’s their job to sell you on a product of theirs based on decades of experience in marketing.

It’s strange because clearly this person could just ignore this review or Kevin’s perspective in their purchasing decision. (You’ll notice that this person asserts Kevin knows nothing about games, an accusation I know all too well as of late.) As someone who adores Arkham Knight, I can see where Kevin is coming from. That was his experience and it actually resonates with a great many other people.

The key to writing a good review should be that even those who disagree can still pick up on those aspects they’d love: For example, Kevin noted how often you use the Batmobile. He found that tiresome. However, I love the Batmobile and I loved the parts where I had to use it. So his response to the same scenarios are exactly the opposite of mine: there’s no arguing there, it’s simple fact that our tastes just differ.

It’s strange that someone who clearly has been swept up in the PR to purchase the game feels the need to defend it against someone who’s played it (and is clearly an experienced critic). Kevin isn’t stopping you; he didn’t say it was bad; he gave it a 7 not an 8 or 9 like most other places. That people who haven’t played it are taking issue with the score should tell you so much about how so many gamers respond to criticism in general. It’s tiring dealing with such responses. But we haven’t reached that point where such responses are the exception rather than the constant: Too many gamers want everything and everyone to be mouthpieces for PR, rather than individual, critical perspectives on our favourite medium.