If, like me, you love classic adventure games – King’s Quest, Day of the Tentacle, Grim Fandango and so forth – then this looks perfect. STASIS, boasting stunning art design, Ridley Scott-esque environmental creepiness, and engaging story, is being developed by local creator(s); it’s nearly reached its Kickstarter goal.

I love that it’s made by fellow South Africans, since it shows we’re capable of “world-class” in our creations.

I hope you’ll support it with me. Help me achieve my evil plans of showing the world what my country can do, beyond making biltong, getting upset at lady hunters, and laughable leadership.

ComRes recently carried out a poll for the Sunday Telegraph, asking the question: ‘Do you believe Britain is better off as a monarchy or would be better off as a republic?’ 66% voted monarchy, 17% republic and 17% don’t know. Yet the Observer insists that the Royal Family is outdated. Is it not ironic that, in the name of democracy, the Observer rejects polling suggesting a democratic majority in favour of monarchy? Today, theirs is the minority opinion, and in democracies minority opinions are not carried. So, by all means disagree. We can do that sort of thing in a constitutional monarchy. But perhaps we should admit that it is the republicans who are outdated? (source)

JR Hill doesn’t show us the link of “yet” in his initial comment. A poll showing us what the average person thinks doesn’t contradict an argument from a single person. It doesn’t link in two ways.

First 66% could vote that women should be denied jobs, “yet” a John Stuart Mill could argue differently. That doesn’t tell us who is right in that debate (spoiler: it’s the great Mill), it shows us differing opinions. The “yet” should be replaced by another conjunction, like “and”.

But, that’s still probably wrong because of the second way it doesn’t link.

In saying that the Observer thinks the Royal Family is outdated, the only way for that sentence to link is if the Observer was making a FACTUAL claim based on the same poll data – not a moral argument. It would make sense in this way: “The poll says that 66% voted monarchy… yet the Observer insists the poll says majority voted against monarchy”.

The Observer isn’t arguing how many agree, it’s arguing the idea is unjustified.

Indeed, when Hill says “theirs is a minority opinion”, he again seems to be linking majority with justification of argument. This is an appeal to majority fallacy. And again, the Observer wasn’t describing data which is what Hill is doing and conflating.

In my latest for The Guardian, I examine the backlash against hunter Melissa Bachman who killed a lion then posted a picture of her successful kill on social media. The backlash, more than the kill itself, worries me. That doesn’t mean I support hunting – I still don’t know my moral position on it – but it does confirm my worry over pile-ons, hate and indications of sexism that poisons much discussion of women on the Internet. END_OF_DOCUMENT_TOKEN_TO_BE_REPLACED

I made noises (wrote a Medium post) about maintaining a sense of integrity when reporting and criticising and writing on media that is popularly consumed: particularly tech ones.

It’s really an elongated reaction to the frequent, dirty habit of game and other tech journalists Tweeting pictures of amazing technology, that they didn’t themselves pay for (my follow-up post will argue “not paying” is not the same as “for free”).

I’m ignoring the boring accusations of how it means journalists have been bought by whatever company sent them such swag. I’m interested in what is more essential: that critics and writers and so forth ought not to emulate the base actions of fans.

It doesn’t matter how much they love something – be it an Apple product or the latest Call of Duty – what separates them from every commenter and gamer with a blog, is that they should have a higher (or special) degree of integrity, anchored by their responsibility to us: their readers. When they fail that, they’ve failed their job. And we must learn to recognise it.

(You can probably tell how much I hate all those “unboxing” videos of the latest consoles.)

I wrote a piece about a common fallacy I see in criticism – particularly video game criticism. I argue that people like to talk about what a game “should” be; often, this isn’t a helpful criticism since it’s a refusal to accept what the game is.

I make my full case here at my regular haunt at GameZone.

My super smart frenemy Kenan Malik has a new post up, examining the blurry, grey landscape that is the no man’s land between the criticism of Islam and Islamophobia.

Islamophobia is a problematic term. This is not because hatred of, or discrimination against, Muslims does not exist. Clearly it does. Islamophobia is a problematic term because it can be used by both sides to blur the distinction between criticism and hatred. On the one hand, it enables many to attack criticism of Islam as illegitimate because it is judged to be ‘Islamophobic’.  On the other, it permits those who promote hatred to dismiss condemnation of that hatred as stemming from an illegitimate desire to avoid criticism of Islam. In conflating criticism and bigotry, the very concept of Islamophobia, in other words, makes it more difficult to engage in a rational discussion about where and how to draw the line between the two.

I tried tackling this in relation to Sam Harris – who I like but Kenan isn’t such a fan of – some time back, myself.

I find, for example, Murtaza Hussain’s criticisms of Harris misguided, though I’ve not yet formulated a good enough response. Anyway, Kenan’s articles are always incredibly nuanced and thoughtful (compare that to anything Hussain writes about Harris).

I hope you’ll read Kenan since he’s one of the smartest people you’re likely to encounter, whose topics are broad yet consistently insightful. Even The New York Times recognised this recently.

Whenever I Googled any aspect to do with “fake geek girls” or other aspects of regular nerdrage, this blogpost kept popping up. It’s titled “Why Cosplay Girls Annoy The Shit Out Of Me”.

I thought I’d write a response, since the comments seem to mostly agree with it and I’ve not seen one critically examine it’s strange claims. Sorry that it’s a little old.

I am anticipating a sudden drop in my number of online friends and an immediate rise in hatemail. Why? Because today I am calling out cosplay girls.

I am a science fiction fan, and I mean that in the “I know who Theodore Sturgeon, Robert Sheckley, Fredirik Pohl and a whole bunch of other people you have no idea are because you think watching 6 seasons of Lost made you a hardcore Sci-Fi fan”

Oh please! He think this proves his credentials?! END_OF_DOCUMENT_TOKEN_TO_BE_REPLACED

Yes, it’s a (local) gaming one; if you’re interested in gaming, good writing or my writing, I hope you’ll give it a read.

It’s free and lovingly made by fellow South African writers who love games. I love the fact that it’s a magazine, not a knee-jerk, “put up as fast possible” website – where speed of information matters more than quality conveying of that information. 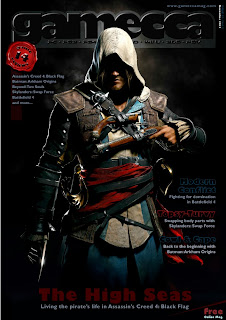 My latest for the Guardian was a lighter piece – that actually ties into more deeper elements of my hatred for most things romance – on this.

The comment section is a pleasant (/sarcasm) space of people questioning the usual, irrelevant details of me:

Some people seem fascinated with my ugly mug staring at them. I found that sweet.

Indeed. According to a Christian group in Australia, October’s terrible bushfires were caused by the pesky gays trying to be all equal and love like other humans and shit.

The charmingly-named Christian Snippets Australia has sent many emails to New South Wales lawmakers, since there has been an effort to legalise same-sex marriage.

..that recent ‘bushfires and gale force winds’ were a ‘prelude’ to what would happen if a bill to legalize same-sex marriage is passed by the NSW Upper House.

As usual, with the threats, their inner-poet comes out as with the warning to the state Premier: “The email warned NSW state Premier Barry O’Farrell to ‘quash the bill or be quashed’ himself.”

The terrible destruction caused by the fires won’t be solved by preventing gay people from marrying; but of course mindsets so embedded in finding moral faults via supernatural morality will always have refracted answers. The moral stick bends in the waters of faith, meaning no proper answer to real questions can be solved. Clarity and recognising why these fires occurred – from a scientific and evidence-based political perspective – will solve and prevent this, not prayer or recognised homophobia.