If you like any of the work I do, any tip contributions are greatly appreciated. Just click the ugly button.

I didn’t like how a previous post was written, about local author ZP Dala. I’ve taken it down, since to correct it would be pointless. If anything definitive happens, I’ll post then. I’d rather try minimise confusion. Apologies for this.

I present a creepy pick-up artist, spreading his predatory message that targets women and teaches young men how to sexually assault women.

Here we have a perfect example of white male entitlement. He seriously says the title of this blog, in the context of desired women in Japan. You can also enjoy his racist re-enactment of Japanese women’s reactions. Also a warning of him displaying assault in this video.

Some choice quotes from the video.

Yeah, just grab a strange woman, without her consent; just “be a man” and grab a woman you don’t know because that’s not terrifying, fearful, dickish, awful. Yeah, just grab her. “She’s Japanese”.

He suggests yelling a Pokemon name to help ease the situation.

“Romping through the streets just like… grabbing girls… head on dick.”

Nothing about women or their consent or them being people.

Instead we have this. 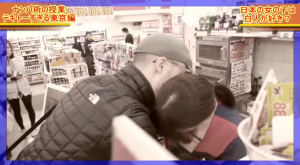 She’s at her place of work and now some entitled white dude has decided to harass her, for lols, for “game”, because he wants to enjoy himself.

Fuck everything about this. (Do we even need to mention whether his behaviour is triggering for women who have survivoed worse abuse?)

The Guardian’s Comment is Free published Somayya Ismailjee’s takedown piece of this man, Mr Julien Blanc. I urge you to read it and I urge you to speak out against creeps like this.

The fact that this is a man who can literally profit off abusing women, get publicity, have a large social network and real life following, host workshops that are fully attended, and proudly display his sexual harassment on his social media tells you everything about rape culture.

Fuck everything about this.

In my latest for The Daily Beast, I try encourage men to change their attitudes toward women – after the seemingly neverending demonstrations of creepiness on the part of men toward women. From street harasssment to awful reactions in online dating – linked in my post – the endless parade of evidence of men milking the udders of entitlement require constant opposition, it seems.

It’s not only “bad” guys, it’s guys from every demographic. Yes: Even dudes who read pro-feminist blogs. Men who dress up entitlement under the guise of being nice, of being confident, of being a “bad boy” need to recognise how they’re creating toxic, unwelcoming environment. And more men need to be helping women change the environment to make it better for all.

So I’ve done a fair amount of work in ethics. I studied it as an M.Phil at a centre for Applied Ethics; I wrote on it for Big Think, write on it for Daily Beast, the Guardian and elsewhere. I teach it at a local university, to first-years, medical students and, once, even accountants. I’ve reviewed papers for major bioethics journals. I’m not an expert in it: but I can safely say I’ve “done” ethics more than most people.

And this is one reason (of many!) why I find Gamergate, this supposed movement concerned with “journalism ethics”, so insulting, so demeaning, and so contrary to ethics. I care a great deal about media ethics – particularly gaming media, as someone who also writes in that sphere – so I would love for more people to care.

Gamergate, however, makes my job a thousand times harder.

It’s clear from my hundreds of interactions with Gamergaters that, for a movement that is ostensibly about “ethics”, it sure has a lot of people that have no idea what that even means. I want to outline some various problems Gamergate has with ethics, aside from continuing to exist in the face of creating toxicity and harassment. END_OF_DOCUMENT_TOKEN_TO_BE_REPLACED

…led to someone taking time to not send threats to Ms Sacco or merely complain to their friends about how nasty racists are (who would disagree?) and do this: http://justinesacco.com/

Using attention, current focus and intense emotions and funneling it properly. Excellent. Truly excellent. Want to do something about people like Sacco? Go donate to Aids charities, encourage others to, and don’t send that threatening Tweet or yell about more obvious moral standing (“racism is bad!”).

I will write something on this later. For now, it’s a little too fresh.

Some time back, some of the most thoughtful, eloquent people from South Africa joined forces, in some kind of Avengers move, to discuss and combat “[o]bstacles to a free society [such as] oppressive or irrational legislation, moral confusions, bigotry and prejudice, and misconceptions about science and secularism.” This was the Free Society Institute‘s conference titled Thinking Things Through, which got support from the International Humanist and Ethical Union (IHEU).

You can witness all their smarts on full and delightful display now in a single YouTube channel. Here’s the first, with FSI Chair Jacques Rousseau.

I hope to be watching and writing on each one.

For now, I hope you’ll give them all a watch (and witness that South Africa is not comprised solely of lions, grasslands and combat, but critical thinkers and eloquent speakers of international standing).

I made what I thought were legitimate criticisms of Holly Baxter’s piece, premised on criticisms with her points in her piece for the Guardian on crowdfunding. I spent a long time writing it and trying to be careful, since I’m aware she is currently facing much unnecessary, unwanted and unwarranted digital hate.

I’ve decided, despite spending a long time on the piece, not to publish it (at least for now). I do not wish to add to the Internet’s hate or criticism of Ms Baxter. No one will die because I didn’t say something, but the least I can do is be sensitive to her position right now. Apologies all round. That was an asshole move on my part.

I will perhaps publish it later, but for now, I’d rather spend time making social media and Internet in general a better place for discussion and not add to Ms Baxter’s unnecessary catalogue of negativity.

No, she doesn’t deserve it. And, no, I don’t agree with her arguments. But right now, what matters more is her sense of safety and I don’t want to do anything – even minor – that might detract from that. I’m no one, of course, but as we all know, we are all public figures.

After seeing Baxter’s response on Twitter, I’ve chosen not to publish the article at all. Nothing significant will be gained by my publishing.

. @devhynes I’ve been off Twitter for a while but having just seen how upset you & fans are, I’m mortified and sorry. The article was (1/3)

. @devhynes insensitive and the worst thing to know is I hurt your feelings at such a difficult time. The headline was especially (2/3)

. @devhynes incendiary, I didn’t write it, and I ensured it was removed. But I take responsibility for my writing and apologise

This is the saddest thing I’ve ever had to waste time writing. Find it here and please note I’ll be trying to stick to it as much as possible. This is about not only trying to create a safe and pleasant and thoughtful space for me, but also for my readers.

My latest for the Guardian was a lighter piece – that actually ties into more deeper elements of my hatred for most things romance – on this.

The comment section is a pleasant (/sarcasm) space of people questioning the usual, irrelevant details of me:

Some people seem fascinated with my ugly mug staring at them. I found that sweet.