After dealing with trolls for an entire day – thanks to a certain prominent atheist with a million followers Retweeted me on Anita Sarkeesian – I had my article on the same issue go live. I looked at what happened when Joss Whedon and Tim Schafer endorsed Sarkeesian, what men (and non-targeted people in general) can and must do – even if misogyny and sexism appears to be a dying animal. It’s cornered beast but still has claws.

I was asked to write something for our local Men’s Health Magazine* website, about men’s role in everyday sexism. I’ve long been saying that more men’s magazines should have pieces showing support for women and the issues they face – especially ones perpetuated by men.

This might sound contradictory but that highlights a problem: issues where women suffer the most are no less social issues that should concern us all because women are affected more.

Anyway, it was great of them to want this kind of piece. Yay, progress!

*Not ALL Men’s Health Magazines.

I wrote about what men can do regarding street harassment of women. Spoiler alert: don’t be assholes.

To be honest, it’s actually a tough situation – on the one hand you want to stand up, in different kinds of ways for the rights of people not to be targeted for their race, gender, etc.; on the other hand, you don’t want to treat them like fragile princesses, undermine their own strength, and so on. It’s a difficult balance. However, from what I’ve read and what women have told me – and what I’ve long suspected – silence is often worse when harassment occurs.

Anyway, I expand further over at Women24.

“Danielle Wolf was arrested on Sunday after a fellow shopper called the police on her for using the F-word in front of her children,” summarises The Daily Beast.

…and it must stop. I’m tired of tolerating an internet where people are unfairly targeted for their race, gender, sexuality, etc. In my latest for The Daily Beast, I didn’t want to target the “trolls”, but those who shrug this off, claiming it’s not a big deal, who say “That’s the Internet”.

Nope. That’s cover that allows this toxicity to continue. We can and must do better.

How should we respond to awful posts on social media? Spoiler alert: I don’t know, but I think we can do better – overall – if we don’t always reply quickly, grounding our responses with what is best for others. Not what feels right at that moment. In my latest post for TBD, I use the example of a Tweet that directly targets people like me – “foreign-named”, darker skinned, etc. – and reflect on what I’d actually like to see more of.

Spoiler: It’s not abusive messages sent to the random kid who made the racist Tweet.

Read it at The Daily Beast… 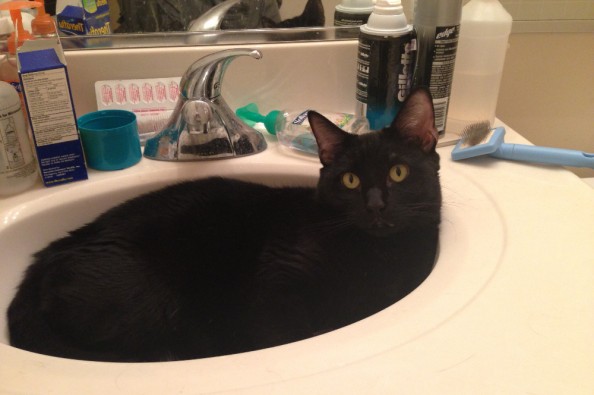 Seriously: if the internet can donate $55,492 so someone can make potato salad*, hopefully some of us can contribute to help a beloved cat – who really needs help with medical bills and operations. Please do what the Internet does best, when it uses its powers for good.

H/T: Bob Chipman (aka “Movie Bob” from The Escapist)

*Yes, I realise the guy gave much to charity 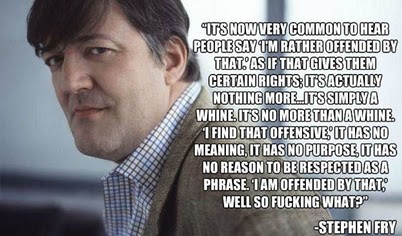 Now, it’s not because it’s false. It’s not because Fry isn’t spot on about this being a sometimes correct reaction to, say, wide-eyed religious conservatives who want to ban books, censor science, etc. Indeed, the context was in conversation with Christopher Hitchens about the pernicous way “offense” from religious people was seen as sufficient reason to censor – it was about the idiot notion of blasphemy as still regarded as legitimate in secular, civil society. (South Africa couldn’t distribute a book some years ago because it offended some members of the Muslim community. That mindset, years ago, is also why I heard about and wanted to read The Satanic Verses; and one-two-skip-a-few I’m now an ex-Muslim. Streisand Effect leading to atheism.) END_OF_DOCUMENT_TOKEN_TO_BE_REPLACED