So GQ published a profile piece by the excellent Jeff Sharlet on the Men’s Rights Movement – specifically the colourful cast at the awful A Voice For Men at a conference. Given that it’s examining men’s rights activists, there would be some disturbing reading. I Tweeted some.

Here on fatherhood and rape…

What's the harm with MRAs? "Good fathering" is responding to your daughter, who says she's been raped, with threats. pic.twitter.com/a7tA5Zrxy0

Because no rapes ever happen that aren't recorded & where women don't get a lot of bruises. #LegitimateRape pic.twitter.com/5rzK4cJZf1

There is a horrible description of how they treated Sharlet’s (woman) friend, Blair.  She was taken aside by the collegiate-activism director of A Voice for Men, Sage Gerard.

[Sage says] “You could put down your book right now and yell ‘Rape!’ and I would be led away in handcuffs.” They think about this. Sage says, “I hope it’s okay if I hug you.”

Before she can respond, he pulls her in, pulls her up out of her chair, pulls her against his chest, and holds her there. He rubs her back. An embrace Blair will later describe as “the most unconsensual hug I have ever known.”

Blair: “I still don’t know what to do about the poem.”

Sage loosens his grip. “I apologize for dragging you away,” he says. “I wasn’t going to feel okay until I talked to you.” He warns her not to send mixed messages. For instance, she shouldn’t put her hand on a man’s knee if she doesn’t want to have sex with him. Sage puts his hand on Blair’s knee. This is not a mixed message, he wants her to understand. She’s here, in the VFW. She’s taken the red pill. She needs another hug. He needs to give it to her.

Later, they joke about raping her.

“I’m curious,” [Paul] Elam says. “What did your friends think when you told them you were coming here?”

“To be honest?” Blair asks. Elam nods. She says, “I had friends who said I’d get raped.”

Blink. You can almost see the struggle in Elam’s bones: Play the nice guy? Or the perv? No question. “All right!” he booms, swinging his arms together. “Let’s get started!”

“Get the video camera!” Factory yells at his girlfriend, who giggles weakly.

I should be very clear here: At no point does it seem like Elam or Factory is actually going to rape Blair. We know they’re joking. Just a couple of middle-aged guys joking around about rape with a young woman they’ve never met before in a hotel room at one in the morning.

Sharlet’s piece is hard to read. And Voice for Men were certain to respond. They did in a way only A Voice For Men would: by targeting Blair as being “pimped” out by Sharlet. It’s literally in the title.

Elam doesn’t say what Sharlet got wrong, only that he takes offence at the idea that a writer needs to highlight Elam wasn’t actually threatening rape. Why would anyone think that of someone who claims women beg to be raped, likes inflicting pain, gets aroused by targeting his opponents, and makes website to put feminists alongside murderers?

It’s also unlikely that Blair consented to the pictures the site has of her, which link to her Facebook page. That’s some serious unethical media. Elam also refers to her as “pretty young Blair”, while trying to wave off worries about an attempted rape. That doesn’t exactly help, dude.

My brilliant friend David Futrelle has a better write up about AVFM’s response.

This site doesn’t speak to me or for me. It’s the voice of misguided men, filled with toxic masculinity that leads to fathers dismissing and mocking their own daughter’s claims of rape; to entitlement to women’s bodies because of their wardrobe; to rewards for being decent. It’s ideas that come to someone who’s identified a sickness but looks outward, instead of inward.

Men face numerous troubles and MRAs blame feminism, not the targets of feminism – which should be the targets of men, too: a sick society, a broken world, one still struggling under the heavy load of homophobia, transphobia, poverty, inequality, racism. A world that seems designed for only a select few to benefit, while the rest of us struggle just to stay afloat.

Men who use their platforms to berate women for problems are acting unethically: they are using finite time, finite resources and a powerful tool on the wrong target. Instead of trying to make better men, we’re making bitter ones. So many are straight, able-bodied, cis men who’ve never faced serious pain until a woman rejected them to some degree; and they use that poison to paint all of women in a single, ugly colour, smearing their humanity across the canvas of their worldview.

Women want to help men; women with platform and voices have spoken out in defence of male rape survivors. I know where Lindy West was, during the Shia Labeouf rape allegations – where was A Voice For Men?

Just look at the loud support Labeouf got from A Voice For Men that… oh. One forum post & a link in 1 roundup. pic.twitter.com/qrs2tFeUSf

It’s a voice for men – just not alleged rape survivors. So some men, who have non-problems and blame feminists. Oh, they’ll mention prison and suicide and work-deaths, but they won’t do anything about it. They never have. Indeed, they make it worse by making it seem like they’re a voice or men who have these issues – they make it worse by using these as touch points to launch nonsense diatribes about the evils of feminism.

This is not a voice for men, it’s a voice for poison. It’s a voice for toxicity that makes any efforts we want to make toward helping men who have mental health problems, who are rape survivors, who are abused by their wives much, much harder. Our gender requires serious self-reflection, we need to be helping men, creating better men, with better views, to learn how to listen, how to apologise, how to be… just better.

Don’t let A Voice for Men be the voice for men. Let’s show that men can be and are better than Paul Elam and his band of unethical content creators.

My friend David Futrelle has a better wrpte

Jon Ronson has an adaptation excerpt from his latest book age out public shaming in the digital age. It primarily revolves around Justine Sacco, who you might remember as sending out that racist/unfunny Tweet.

The furor over Sacco’s tweet had become not just an ideological crusade against her perceived bigotry but also a form of idle entertainment. Her complete ignorance of her predicament for those 11 hours lent the episode both dramatic irony and a pleasing narrative arc.

By the time Sacco had touched down, tens of thousands of angry tweets had been sent in response to her joke.

For the past two years, I’ve been interviewing individuals like Justine Sacco: everyday people pilloried brutally, most often for posting some poorly considered joke on social media. Whenever possible, I have met them in person, to truly grasp the emotional toll at the other end of our screens. The people I met were mostly unemployed, fired for their transgressions, and they seemed broken somehow — deeply confused and traumatized.

At the time, I wrote about why Sacco’s Tweet wasn’t the worst part about the whole affair (and was subsequently quoted in the New York Times, when they wrote about this same issue): I was horrified by the reactions to it – and, mainly, how she was targeted by those with much larger platforms.

There’s an ethical dimension many haven’t considered with platforms and engagements: It’s difficult and tricky areas. I engage publicly on social media with people, quite often – but always with people who have anonymous accounts and aren’t traceable in any way. I don’t even try show up legitimate problematic individuals, unless they are threatening the livelihood and safety of others: if it’s just some loser Gamergater or MRA, I tend to just block, though inform others of the individual.

The point is it’s tricky and it should be tricky. Shaming shouldn’t be as easy as a Retweet, but it is and that’s dangerous. Platform holders like the Buzzfeed editors and Gawker’s Sam Biddle who thrive on public shaming deserve severe ethical scrutiny for their work and conduct.

Indeed, Sacco isn’t the one who should be ashamed; it’s those with major platforms who decided to draw the world’s attention to her, for her innocuous and clearly outrageous Tweet.

Comment sections are a fascinating topic for me, as I’m very interested in the new dynamics that comes with online interaction and the change in media.

Anyway, I made a Storify of some Tweets after a boring, persistent and verbose commenter I banned here followed me (?) to a game site I write for.

The amazing Soraya Chemaly has a piece up about the internet being made of bros and why that matters.

Tech’s institutionalised male dominance, and the sex segregation and hierarchies of its workforce, have serious and harmful effects globally on women’s safety and free expression.

END_OF_DOCUMENT_TOKEN_TO_BE_REPLACED 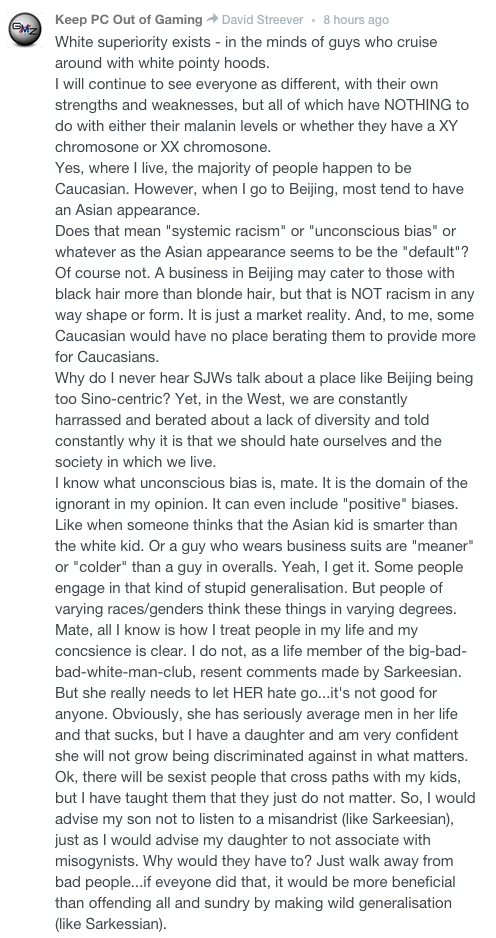