This comment appeared on a local site about rape culture and what it is. 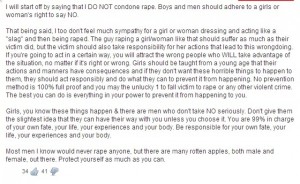 I’d rather not link to the comment directly nor name the individual, since I’m unlikely to change his mind. But it does set up a good basis to respond to yet more nonsense about women and sexuality and how men should consider both.

Let’s look at what this bro thinks about silly sluts and rape, then.

>> “I will start off by saying that I DO NOT condone rape. Boys and men should adhere to a girls [sic] or woman’s right to say NO.”

Good start. But don’t be surprised that people (like me) now read this as “I’m not racist but…”

>> “That being said, I too don’t feel much sympathy for a girl or woman dressing and acting like a “slag” and then being raped.”

Read that again. “I… don’t feel much sympathy for a girl or woman [acting like a slut] and being raped”.

So, sympathy for a rape victim is eroded due to learning that a woman was “acting” in a way you, personally, deem sexually provocative.

There’s no way that people confuse friendliness for sexual advances; men have never mistaken amicability and Platonic interest for flirtation. And there’s no way women dress in a way that is revealing, enhancing of their features, etc. because it makes them feel great in their bodies (but almost always for a short period of time, because they live in a society that constantly pressures women into hating their bodies because they’re not photoshopped).

No: You are the Royal King Mister Master who can perfectly identify what “asking for sex” behaviour looks like.

So how that mitigates rape is mystery and only highlights women are people – but only up to an arbitrary point you have defined, premised on their sexuality. Which can’t be their own, of course, but must be defined by the loudest bigots.

And, here is a shocker: There is nothing wrong with women wanting sex and doing what they can or want to get sex. And, further, even if a woman is naked in bed with you, it may come as a surprise to learn that forcing yourself on her, ignoring her rejections, is still wrong. It’s weird, but women surprisingly are not objects making sounds to play hard to get. They aren’t setting up a challenge that manly men must overcome.

>> “The guy raping a girl/woman like that should suffer as much as their victim did, but the victim should also take responsibility for her actions that lead to this wrongdoing.”

What does “take responsibility” mean? And used so casually alongside someone who is, you know, raping seems to equate the two.

We’ll eventually find everyone and be able to account 100% for all the responsibility because obviously the person most responsible is irrelevant until we account for 100% of everyone involved toward the rapist raping – or the “rape occurring” like some malevolent Sauron-like disembodied force.

We do this for all other crimes, too: we demand the victim who is shot in his home take responsibility. We blame the victims for their murder and their physical assault, we worry that the perpetrators lives will be ruined (not their victim who is probably deceiving us right?); we distrust murder victims, we think they’re probably lying (dead but also in terms of deception)

Look, murder victims, just take responsibility for what happened, ok? At the funeral, let’s raise this and point this out to their families – because we do it for rape victims, so it means we do it elsewhere too. We’re totally not hypocrites!

>> “If you’re going to act in a certain way, you will attract the wrong people who WILL take advantage of the situation, no matter if it’s right or wrong.

>> “Girls should be taught from a young age that their actions and manners have consequences and if they don’t want these horrible things to happen to them, they should act responsibly and do what they can to prevent it from happening.

That’s right: The best way to avoid rape is not to be a slut. If you’re raped, it means you were being slutty/are a slut. That’s some perfect logic. QED. It’s totally not about how stats indicate rape victims are targets of someone they know, sometimes someone they themselves are attracted to, often someone they’re already in a relationship with.

>> “No prevention method is 100% full [sic] proof and you may [be] the unlucky 1 to fall victim to rape or any other violent crime. The best you can do is everything in your power to prevent it from happening to you.

Also, it’s not about luck so much as it is the way much of society – people like yourself and media portrayal – undermine rape s an actual serious crime, due to viewing women as not being allowed sexual identity. And it’s not an “unlucky” few.

Yeah, “girls”. Don’t give “the slightest” indication you’re interested because, as we know, we all perfectly interpret flirtation, interest and so forth. And also once you show even a little bit of an interest, it means sex must happen. That’s the law, right? I think it is.

It’s so great to know that we’re 99% in charge of our fates: it’s not up to politics, economics, technology, other people’s whims, our bodies failing, strength, support. No: it’s just us. If you have a chronic disease, just think that crap away! You’re in charge cos it’s your body. QED.

If you can find a more solipsistic perspective of life, I’d be surprised.

>> “Most men I know would never rape anyone, but there are many rotten apples, both male and female, out there. Protect yourself as much as you can.

This is basically what you said: “There are a few men I know who would rape, but there are also some pretty crappy women, too.”

This attitude and dismissal and equivocation is part of what creates a prevalence of victim-blaming, slut-shaming, dismissal and derision of women as persons who are victims – not instigators – of one of the most horrible acts imaginable.

There is nothing wrong with wanting sex, desiring sex, flirting and having multiple partners. And further there’s nothing wrong later not desiring sex. People who feel “led on” have no right to “take” sex (i.e. rape) just because they (thought they) were promised it. Women aren’t Amazon.com – they’re people who are allowed to change their minds. If you feel hurt, too bad. You’re not that special and people can and are allowed to change their minds and do what they wish with their bodies, without it being about you.

At Big Think, I examine what surrounds the morality of keeping animals in captivity: of course, that’s already a somewhat loaded phrase, but for the sake of brevity I just equated that with anything involving animals being in an enclosed “smaller” area (than the normal habitat), by humans.

I’m not convinced all captivity is always wrong – but that doesn’t mean all are or most. Primarily, I want to untangle automatic assumptions that become definitions: that is, by definition x is wrong, when that is not clearly defined; or where there are instances of “black swans” in terms of these topics.