Over at Polygon, I argue that Bioware have created some goddamn terrifying universes where deities wish for our demise. That’s more terrifying than anything “atheism” could come up with.

@tauriqmoosa @thelindywest the only reason Lindy defends men is because men eventually started to whine like victims the way feminists do.

This was in reference to Lindy West being a decent human being and conveying support for Shia Labeouf, due to his rape allegations.

Notice Mr RP Philosophy characterises “I was raped” as a “whine”.

Notice that a man alleging that he got raped is him sounding like a feminist or a victim – because apparently men can’t be either or both (spoiler: they can) and apparently both are bad.

Notice it can’t be that Lindy thinks defending people who are possible victims is a moral thing to do.

Notice the silence that has fallen on the manosphere when a man has been allegedly raped and feminists are the ones conveying support. Because, hey, maybe the feminists have a point about how to be decent that dudes who threaten women and support rape… don’t? Amazing.

It seems to me that if you’re going to call yourself “activists” the one thing you could do for men is support them. One thing. #YouHadOneJob

At least this continues to confirm my view that one of the worst things for men is the men’s rights movement.

…than this and I will be impressed.

The Rolling Stone college rape campus piece is already a complicated mess. The alleged rape victim, however, has to contend with another aspect of media and platform.

Charles C. Johnson, a former Daily Caller writer and founder of GotNews (a conservative site rife with racist and Islamophobic content parading as “Independent, Unbiased & Unafraid”) has claimed that multiple sources have confirmed to him the identity of “Jackie,” the woman whose alleged gang rape at the University of Virginia was recounted in the Rolling Stone piece “A Rape on Campus.”

What, then, is the ethical response? (Emphasis mine.)

in an absolutely disgusting move, Johnson has published her name, or what he thinks her name is.

The details of the original case are already being heavily scrutinised, there is a lot of clarity still required; given the lack of clarity, how can Johnson release details? What purpose does releasing the name of a woman serve? Further, why not, as a media person, focus on the actual media space – Rolling Stone – that is central to this confusion? Even then, you’d have to engage in very specific, complicated arguments with some sensitivity to rape survivors and the climate itself.

This seems to be nothing but another reason to shame women, fueled by the the MRA fantasy of women crying rape at every opportunity. This is unethical journalism and is vile. Such a focus must be considered in an environment that regularly disbelieves rape survivors; that punishes them for silence and for speaking out. Indeed, such a move isn’t merely about the woman he wishes to reveal, but many others who will see – and know – that this is the price for speaking out.

Of course we should care about allegations that turn out to be false – but even to this, Johnson is doing damage. Even if Johnson was correct, there is nothing ethical in his response. You don’t get moral immunity, even if you’re fighting for a moral cause. What makes a cause moral isn’t merely its stated ideals, but how we promote, communicate and defend it.

And releasing the name of a woman online to people who already dislike women can’t possibly have good consequences. This is the Internet, after all.

This is a failing of using one’s platform and media information; there are complicated moral issues involved in targeting people with your platform. And I see no reason anyone should support Johnson’s disgusting move.

The Washington Post‘s Terrence McCoy asked Johnson what his endgame is, specifically when it comes to outing “Jackie”.

So what’s the end game? What does he hope to achieve from publicly shaming a young woman he claims to be Jackie? Who would that benefit? Johnson has an immediate answer.

He wants revenge for what he perceives to be a rupture in the public trust, inflicted by writer Sabrina Rubin Erdely’s article. “I want [Rolling Stone Managing Editor] Will Dana to resign. I want the people who control Rolling Stone to go over all of Sabrina’s stories. And I want Jackie to get psychological help. I want all the fraternities, suspended under these dubious stories, to be reinstated.” Then, because why not: “I want the [University of Virginia] president to resign. I would like some truth.”

And he intends to get it.

Yes, I’m sure the only and most moral way to achieve these lofty goals is to reveal the identity of a young woman at the centre of an alleged rape.

First if you really want the best experience of the upcoming Terminator film, don’t watch any trailer, read any article. I wish I was in your shoes.

However, if you can’t help yourself, at least watch the trailer without seeing icons, header images or descriptions. I’m not going to embed it but link to it so you can just watch it without, um, spoilers (yes, spoilers in a trailer… I know).

So let’s go through it.

First, bros everywhere.  White men fighting back against overwhelming force – the plot of basically every Hollywood blockbuster. You’ve already got the hint that this is a “reboot”. Yay. Another one? So the first part of the trailer shows the same beats as the original film: scarred John Connor, time machine, soldier volunteers to save Mommy Connor.

Then we see the main evil time-travelling Terminator is a T-1000…. who is played by Korean actor, Lee Byung-hun.

Then a truck comes jack-knifing through a wall, apparently in time to save our “main hero” soldier bro. The door flings open and at the wheel is a woman, who promptly shoots the T-1000. With the voice of some sort of queen – or, ahem, Mother of dragons – she splains to the dude that if he wishes to continue to not die, he ought to accompany her. Some of you might know the reference.

She then commands him as a soldier.

So, after the boring reboot introduction, we have a Terminator who is not white; we have the white male hero being saved by a woman, who is more badass than anything he’s so far demonstrated.

Then you find out the Governor of California raised Sarah Connor, because… time travel.

Yeah, there’s a lot here. And it’s amazing. I usually make a point of not watching trailers for film, due to spoiler territory and enjoying films more with ignorance. But I couldn’t help seeing this as a sign of progress; see, it’s not just being “PC” and ticking of boxes of – gasp – including people who aren’t white dudes. It’s that all this, almost by definition, seems to mean breaking the mould; it means we can have an interesting lead character, who, by the way, is a woman.

Nothing would be shocking if this was yet another major film which featured almost no one who wasn’t the lazily accepted “core demographic” of action films/video games/comics – instead they recognised that Sarah Connor is one of Hollywood’s best female roles, they recognised there’s no reason to cast yet another white male actor to play the role of a fucking liquid robot (however cool he is).

This little trailer should give us hope, like a small robot hand reaching out as it’s swalloed by boring paint-by-numbers summer blockbuster affairs.

Found via CreepyPMs. This is a chat convo where a man is trying to “score” with a woman. I want to focus quickly on his last message essay he sent her. (I recommend reading the short thread in which this appears before). Obviously [sic] all the way down… 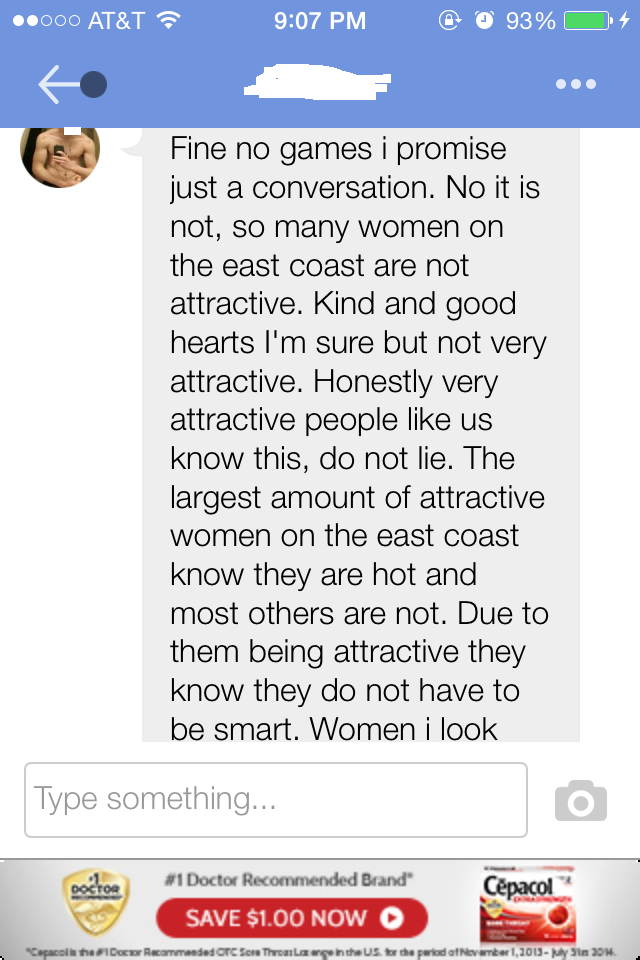 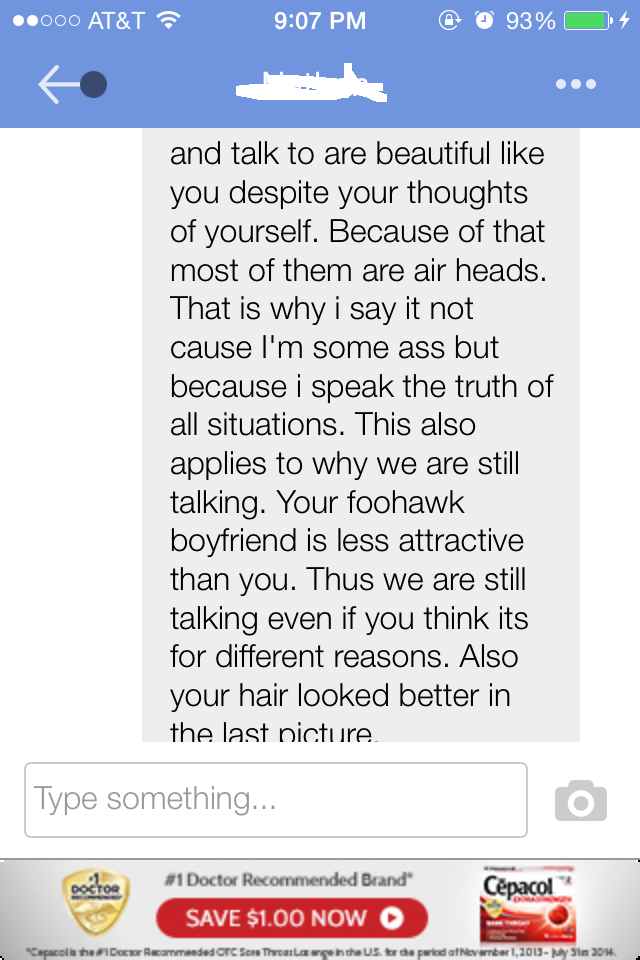 Fine no games i promise just a conversation. No [airhead] is not [an insult], so many women on the east coast are not attractive. Kind and good hearts I’m sure but not very attractive.

Attractive is, in this instance, subjective. Many people find Brad Pitt attractive, many do not. “Attractive” and “hot” and “sexy” should always be read with “…to me” after.

Honestly very attractive people like us know this, do not lie.

Dudes who know what complete strangers think about themselves and others is totally cool and a way to “score”, bro.

The largest amount of attractive women on the east coast know they are hot. Due to them being attractive they know they do not have to be smart.

Aside from the misuse of “amount” instead of “number”, this shows what happens when “hotness” is used as some kind of universal attribute. Being smart – something we have ways of measuring assuming various definitions of smart (PhDs, degrees, etc.) – is apparently incompatible with “being hot”, because “being hot” means women don’t need to do anything to benefit. This ties into the stupid claims of being “too hot to be lesbian” or some nonsense. Even today, I have smart male friends who laugh at TV shows casting women they find attractive as computer nerds. Men are letting their attraction to a woman be the measurement of a woman’s worth: She can’t possibly be anything more than an entity I’m attracted to.

From this is birthed fake geek girls and so forth.

Can we please put this idiot notion of “being too hot for x” to the dustbin of history?

Women i look and talk to are beautiful like you despite your thoughts of yourself.

Again claiming to know what a strange woman really thinks about herself. Nice, bro.

Because of that most of them are air heads. That is why i say it not cause I’m some ass but because I speak the truth of all situations.

Shame: you’re not an asshole because you speak some hard truth, bro, but because you have shitty views of women.

This also applies to why we are still taking. Your foohawk boyfriend is less attractive than you.

Again: this only makes sense if we say “…to me”. Well, presuming you’re heterosexual, her boyfriend would be less attractive to you. Presumably, she thinks he’s just the right amount of attractive – whatever that means to her (and that’s all that matters).

Thus we are still talking even if you think its for different reasons. Also your hair looked better in the last picture.

Nice bit of judgement there, bud.

In conclusion: I can’t fathom why this guy’s single.