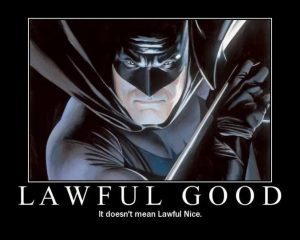 I have come to sincerely believe that the sort of people who do these things, who are capable of holding in their hearts genuine contempt for some demographic or other, don’t understand what kindness is or how it works.They believe that my treating them with the contempt and belligerence they so richly deserve is unkind, and therefore I am a hypocrite*. They believe “kind” means “gentle”, “pleasant”, “nice”.

It doesn’t. In any way other than the providing of very short term immediate comfort, kindness means doing what’s right, not doing what’s pleasant – and “doing what’s right” is not something that exists in a vaccuum. These interactions are not me and TERF du jour alone in space having an academic discussion that affects nobody else.

An argument can be made that this isn’t the best way to do this. Honestly, I don’t even know. I’m a huge fan of the idea that making an enemy into an ally is the best form of victory, but that begins with the requirement that you can reach them at all. We’re talking about hardcore bigots here, people who have subsumed into their very identities a contempt for entire demographics, which pretty well invariably comes with a belief that the members of those demographics they encounter are inferior, damaged, and above all untrustworthy. One of the main jobs on an ally for any marginalized group is to talk to people who might consider them but not the marginalized people credible, to advocate for the marginalized people†. Bigots do sometimes change their minds… but not when they are in the middle of a crusade to hurt someone online.

This is actually beside the point, because this is about kindness, not tactics. Other people may have better tactics, and more power to them**. I’m not a demagogue; at best, I’m a writer, and not one of the ones anybody’s going to be studying fifty years from now. However, when I see someone else doing these things, fighting the good fight as it were to advocate for trans people or mental health, it helps me have a little hope in this political cesspit of despair, and when I smack down a bigot, that is the kindness I’m trying to do for others.

For the record this isn’t the only thing I do for the sake of kindness, the vast majority of it is stuff any casual observer would agree qualifies – and none of which I am talking about here because this post is about the nature of kindness, not about trying to establish some sort of kindness cred for myself. This is about “mama bear” kindness, which is mostly about taking good care of someone who needs it, but also being willing to claw threats in half if need be.

I don’t think it’s a coincidence that the ones who think kindness is necessarily soft and passive are also the ones who use the term “virtue signalling” to describe caring about people who aren’t like oneself, who need to find some kind of selfish justification to explain unselfish behavior in others.

If you confront someone who is out to hurt people, if you confront this ultimate unkindness, and your response is to try to make them comfortable… that’s not kindness at all.

* In Holms’s case I’m really not sure what he expected to accomplish by doing this to directly pick a fight with a blog owner (not for the first time); perhaps he imagines himself a martyred crusader for White Feminism. I suppose that’s what they all imagine, love-bombed by the rest of the bigots for their Good Works.

** I do not mean the “tone police” here. Telling a marginalized person of any kind to be quiet because otherwise they’re hurting the cause is an act of oppression, full stop.

† The Southern Poverty Law Center has a whole series of articles on how to speak to bigots on the daily.