Gaiman occupies an unusual place, to me. He’s a middle-aged white British celebrity, which these days puts him in a demographic practically guaranteed to be hostile, but by all accounts he’s a good guy. Like, properly a good guy, of the understands-his-privilege and now supports the liberation of all minorities – and I say “now” only because it naturally took a long while for him to even be exposed to a lot of these issues. I’ve never heard of him choosing to dismiss anyone.

What makes this unusual especially is I am a writer, aspiring screenwriter, currently working on several TV pitches, and it’s become palpably obvious to me that ‘Neil Himself’ has turned out to be the single biggest influence on the sorts of stories I like to tell. Sometimes even transitively, as certain other influences were themselves clearly influenced by him. That makes him, for me, the most dangerous sort of thing: a hero.

“Don’t have heroes” is a huge important philosophical axiom for me, born out of long sad experience that it isn’t safe to have them. Once upon a time, I liked Harry Potter; I liked Father Ted and The IT Crowd. I thought the latter was particularly interesting as a learnable style of humor. We know how those turned out. But those are extreme author behaviors and minor influences. Back in the day, I was a huge fan of Firefly and it still holds a place in my heart (and thereby writing); I used to consider Joss Whedon the pinnacle influence for screenwriting, and sought to be like him… before we found out that the “him” I would have wanted to be like was mostly PR vapor and he was the usual kind of abusive douche that all men with a grain of power in Hollywood seem to be. But I can’t shake it with Gaiman, because he keeps living up to it, the bastard.

He’s quite active on social media, notably Twitter. Unexpectedly active. One of the very few celebrities who, if you are discussing him or his work (or, presumably, any other topic of interest), does not simply ignore the ocean of chatter but suddenly looms out of it like a shark to lay teeth into someone who just said something questionable and drag them off to the depths, never to be seen again. He did that to me once, a few years ago, when – in the then-absence of explicit information – I had supposed that he was likely to hold unfriendly opinions about trans people based on the fact that his wife, Amanda Palmer, had expressed such herself. Up came the shark and I have never been so happy to be dragged into the watery grave of being wrong.

He did it again yesterday, not to me, but to one of the army of white cishet dudebros who always hate any casting or characterization decisions that move a character’s portrayal away from being like them: 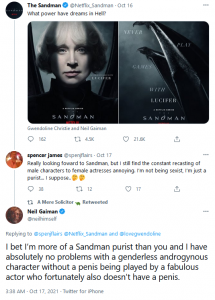 Chomp, splash, blood in the water, and well-deserved. Except… except… I think Neil was incorrect in one part of this, possibly to the extent of lying about it.

I bet I’m more of a Sandman purist than you…

Mm. No. No, not a chance. I call shenanigans here. A purist? Neil Gaiman? Bull. Snotting. Shit.

This is a man who’s presided over or at least green-lit a wave of adaptations of his (and occasionally the late lamented Terry Pratchett’s) work, and in every single case, there are changes. There’s the inevitable adaptational changes that come from moving to a new medium, which even the dudebros usually accept. But there’s practically always other changes, too; characters look different, or feel different, sometimes even wind up becoming something else entirely, because it makes more sense to do it that way. No story, and no telling, lives in a vacuum. He knows that.

But I think it’s even deeper. Stories are, essentially, living things. Every telling is its own being, often the child of the previous telling, and they grow and adapt. But a new adaptation does not erase a previous one, any more than having a child makes the mother cease to be. For example, I don’t at all care for the new Star Trek movies; I think they’ve gotten generic and lost the essential core of what Star Trek was supposed to be. But that didn’t make TOS and TNG stop existing. I can watch original-flavor Kirk buckle swash in his campy 60s way or watch Picard solemnly grapple with alien morality whenever I want; those stories are still there and no less available simply because they ended.

I believe, and I admit I am chumming the water around me right now just by trying to decipher how the man thinks, that Neil Gaiman also believes this. The evidence for it in his work and his support of others’ work is extensive. Every story, every telling of a story, is its own artifact, and one of the greatest uses for such an artifact is to spawn others, be they adaptations, fanfiction, or simply inspirational influences. If I’m right, then this is an attitude fundamentally incompatible with being a purist, or at least being the sort of thing the dudebros could understand as a purist.

Purism is putting walls around what a story was, because you hate it becoming something else. That’s fear, that is. And if there’s one thing about Gaiman’s work and attitude that I aspire to above all else, it is coming to grips with this art with a heart free of fear, instead full of joy for the possibilities.