As I mentioned in passing in my post the other day, I’ve noticed lady actors often have to work harder than men. Men in acting are allowed to “go subtle,” probably because the directors have heteronormative notions about what looks cool from masc characters. I think that sucks. Men flipping out have been very memorable and cool in cinema history. Se7en Brad’s “What’s in the box?!,” young Mel tremblin’ and shakin’ in Lethal Weapon, lots of guys in Hong Kong cinema.

High key moments aside, even being expressive in casual scenes is surprisingly amiss in dudes. I feel like a big reason young Bruce Willis was a sex symbol was that he bothered to fuckin’ smile in his movies. Arch an eyebrow, look at someone sideways. Use your facial muscles, guys.

I’m mostly noticing this in TV. Steven Amell‘s tiny eyeballs would be hard-pressed to register an emotion, so maybe he has an anatomical disadvantage compared to the rest of the cast of his show. I’m watching all the episodes of Dead Zone I missed back when it aired, and as much as I want to like Anthony Michael Hall, he is usually dead-faced as hell. This was at its worst in the episode when he had a one-night thing with his ex. All the tension and drama throughout the season, Nicole de Boer looking at him with a face brimming with intense feels, and AMH was just kinda standing there bugging his eyes out.

Let’s say for the sake of argument that due to cultural expectations and dramatic conventions, they just gotta play it cool 99% of the time. They still need to let it out of the bottle when it counts. The aforementioned scene in Dead Zone? Way undercut by the man’s acting.

The most comical example ever had to come from the otherwise pretty decent Sam Waterston early in his run on Law & Order. There was an episode where a lady he’d worked with in the past got busted for an ethical violation, which she said she did in his name, because they were having hawt romantical naked torrid hawt affairs. That actress – Laila Robins – was falling all over herself to show that she had some kind of intimate connection with Sam’s character Jack McCoy. Bedroom eyes all the time, slouching around like Mae West. And for all that? Waterston wobbled uncomfortably in his starched collar like an asexual quail. 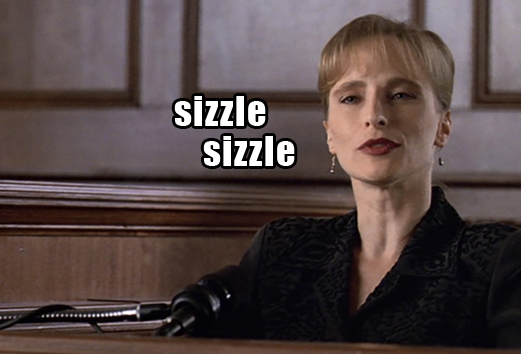 too hawt for quails

Not that there’s anything wrong with some quails being asexual, but they seem miscast opposite a siren. It was unintentionally funny, but also emblematic of the prob. Men need to work harder in the acting game. And not like Jared Leto.

HBO’s Westworld and SyFy’s 12 Monkeys. I’ve liked those shows a lot. Westworld was laughably edgy at times, seemed like it was trying to reach a quota of F bombs and tiddies in some episodes, but had several excellent to truly great things about it. 12 Monkeys played with a lot of sketchy mental illness tropes, had all the time travel related foolishness you might expect, and used a child as a character motivation in a way that felt emotionally dishonest and a bit ridiculous to me. And the lead actor looks like a tired otter. But it had a bad-ass two-fisted style and some sweet moments of plot payoff. I love the first season twist ending about The Power of Friendship, and Kirk Acevedo is sexy in a way that I find hard to explain. Plus the lead actress (as usual) does all the heavy lifting on the show, and does it well.

I’ve liked both of those shows a lot, but I have such big doubts about future seasons that I’m unlikely to tune in unless I get very positive spoilers. The places they left off promised nothing good. Spoilers below the fold. Anyhow, do you ever get like this? Find yourself bouncing on a show because you can’t imagine it sustaining the same quality going forward?
END_OF_DOCUMENT_TOKEN_TO_BE_REPLACED

Content Warning: Statutory Rape, Homophobia, Biphobia, Eating Disorders,
Fatphobia, let me know if u think I should mention anything else…

Social justice score: 1 out of 5

So Archie Comics got hella weird in the Nü Millennium, with attempts at maintaining relevance by reaching different audiences. One of those tacks was to make a series of serious adult-ish comics with edgy elements written by Mark Waid. Now adult-ish edgy Archie is on The CW and to kill a minute I’m watching the first episode. Thoughts as they come…
END_OF_DOCUMENT_TOKEN_TO_BE_REPLACED