…or Darby O’Gill and the Goodbye Momo

A long time ago film companies had studios. There are vestiges of this arrangement, but as exploitative and sheisty as the studio system was, it had too much overhead for modern capitalism. They had to go. Once upon a time, though, Disney was in a system where they had a film studio and a sense of obligation to use it. It was just how things were done. Get a studio, use it or lose it. So they cranked out some really bizarre little films for a few decades, like The Absent-minded Professor and The Computer Wore Tennis Shoes. Did they do Herbie the Love Bug and The Parent Trap? The Shaggy DA? I think they did.

Eventually the production values dwindled until there was nothing left but made for TV fare. But back in the halcyon days before pomade quite fell completely out of style, they made a goofy Irish-sploitation leprechaun movie called “Darby O’Gill and the Little People.” Now it’s mostly used in clip form to show Sean Connery singing romantically a few years before he became James Bond. But believe me, it’s an entire-ass film. I saw it on TV when I was a child and a few things stuck with me.

Darby O’Gill catches a leprechaun king and tries to be smart about his wishes. But something (karma?) something, his young daughter was going to die, and he had to use his last wish to take her place in hell. The leprechaun king lets him off the hook and they live happily ever after. But it was a bit dark for small children.

I remember him yelling “The BawnSHEEeee!” when the spectres started appearing, and that Death wasn’t a guy with a boat. He had a flying horse-drawn carriage. Maybe it influenced Jowling Kowling Rowling’s thestrals. I just remember that element being pretty spooktacular. Translucent horses show up and you get inside, resigned, nowhere to go but beyond that veil.

About 5:20 AM today, my sickly old cat Momo woke me up making these rhythmic choking sounds. I knew she was going to die real soon. I had been intending to schedule her to be put down on Saturday – after my work week and a little more time to keep her company, say goodbye. She’d been given subdermal hydration and an appetite stimulant to prop her up for a little while, but apparently her various lethal afflictions had a different agenda as goes the timeline of this.

So I roused my boyfriend’s mom to drive us to the emergency veterinarian, where we knew they would be ending her pain. It was dark out and the closest emergency vet was a few towns over. We went this way and that, through dark pre-dawn valleys, highways, freeways, and winding hillside roads. Along one such road we had to slow to not hit a raccoon. It was leaning into the road with one very human-like hand on the ground, ghostly and silver, teeth slightly bared, eyes glowing.

We all draw our own standards as to what constitutes respect for non-human animals. Cultures and religions factor into it, take away some of our choice, but at the end of the day we know what we want to do. Some people want to kill raccoons on sight, thinking about their overpopulation and menace to domestic animals, their spread of rabies. Or they just like killing for fun, because they’re gross creeps. Me and my ride are not the kind of people who want to kill a raccoon, so we gave it a chance to stay on the side of the road like a good boy.

We were on a mission to ease the suffering of an animal, our minds wracked with sympathy for her, locked in a box with some towels, on the back seat as it sloshed this way and that in the hilly terrain, who knows what happening in her abdomen. The dark chaotic ride, the silver goblin on the roadside, the boxes within boxes. I was put in mind of Darby O’Gill and the carriage of Death.

We were the carriage of Death, as we had been on a similar night a few years ago when Mochi was dying. He’d been in horrible condition and was screaming in pain as much as he was able. When I found out it was gonna be over for Momo soon, I thought she had at least a little more time, that it wouldn’t have to be like that. I was wrong. Maybe she was in less pain? Her heart rate was slow, temperature low.

Anyway, I feel like shit for having guessed wrong on her expiration date. My boyfriend said I should be with her and I said I’d see if I could try. But when we got there she wasn’t making noises anymore. I didn’t know if she was alive. They said she was, but wasn’t tracking on anything. Even so, I also feel like shit for not looking into her eyes as she went. Or at least facing her with eyes closed. Cats like that. I just wanted them to let her go as quickly as possible, so I didn’t go there.

My boyfriend and I got Momo and Mochi about a year after we moved in together, if that. Now they’re both gone. And I got to be one of the sad coachman for both those rides into the abyss. Then it was straight to work for a full day of crapola. I’m dead like the studio system. Good night. 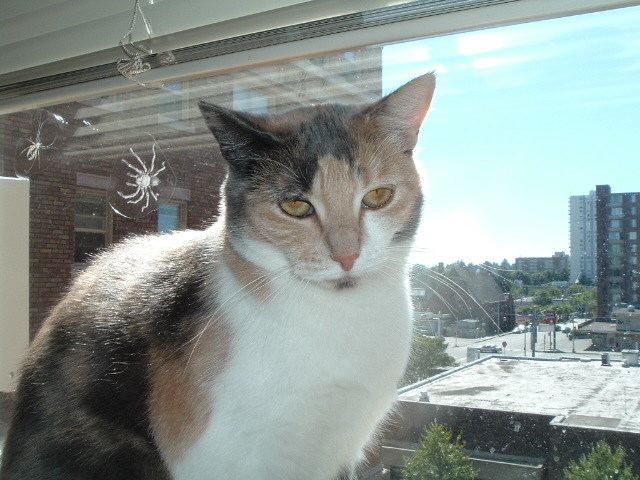