How appropriate, how timely, how right in every way – Jesus and Mo the Book is now available in Danish. 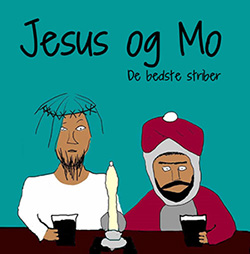 [Google translate with some tweaking]

The proceeds will go to charity

Jesus and Mo – the best strips was being prepared for printing while two tragic terrorist attacks hit first Paris and then Copenhagen.

When the terrorist attack on Charlie Hebdo took place on January 7th, we were almost finished making the Danish version of Jesus and Mo ready for printing. We quickly decided that the terrible events made ​​it even more necessary to publish the book…

After that there’s something about the terrorists’ goals and the boys and freedom of expression but there’s a verb missing so I don’t know how to tweak it. Maybe Sili will read this and assist.

Update: he did. Herewith:

When the terrorist attack on Charlie Hebdo took place january 7. we’d almost finished preparing the Danish edition of Jesus and Mo. We quickly decided that the terrible events made it even more necessary to publsih the book in order that [the] terrorists not succeed in their goal of suppressing the freedom of speech that is the foundation of democratic society.

But for the sake of safety we also felt that it is necessary to publish The best of Jesus and Mo anonymously. That decision was vindicated [not a literal translation, but doing it word for word sounds odd] when Copenhagen too was hit by terror. The attack took place to days after we had sent the book and a press release to the Danish media, and while we were arranging interviews with the British artist on the occasion of publication.

We have decided to make the publication a non-profit event. In consequence the profits from the sale will be used to support the fight for freedom of speech in the spirit ofJesus and Mo. What project we’ll support will be decided later when we know how big the profit will be. It will then be published on this site and by press release.