I ignore 99.999% of it, but someone brought this particular lie to my attention and I’m finding it unignorable. 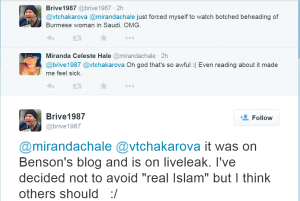 Miranda Celeste Hale ‏@mirandachale 2 hours ago
@brive1987 @vtchakarova Oh god that’s so awful 🙁 Even reading about it made me feel sick.

Brive1987 @brive1987 · 2 hours ago
@mirandachale @vtchakarova it was on Benson’s blog and is on liveleak. I’ve decided not to avoid “real Islam” but I think others should :/

Miranda Celeste Hale ‏@mirandachale 47 minutes ago
@brive1987 She posted the *video* on her site? JESUS. Wtf? I mean, I fully agree w/you that we shouldn’t bury our heads in the sand & should

Shermertron ‏@Shermertron 52 minutes ago
@brive1987 @mirandachale @vtchakarova Too bad the ppl calling her a racist for her stance on Islam won’t watch it,…

Miranda Celeste Hale ‏@mirandachale 51 minutes ago
@brive1987 not ignore the Islamic elephant in the room, but that can be done w/o seeing the vids & her posting it is kinda fucked up

I did not post that video on my blog. I didn’t look for the video, let alone post it. I don’t want to think about the video. Of course I didn’t fucking post it. “Brive” told a huge disgusting lie.

Sorry for the interruption. Back to ignoring the 99.999%.