I went out to do some things, as one does, and when I came back I found an envelope from Free Inquiry in the mail. I thought it must be the check for my most recent column, although it was an odd envelope for that – brown, and larger than a letter envelope. I opened it and found another envelope, a letter one this time, addressed to me c/o Free Inquiry.

I opened that and found a sick little thing from Martin Wiesner, aka Pogsurf, who started trolling me a week or so ago, for reasons I don’t know.

At the top it says

A SHORT QUIZ ABOUT THE PANELISTS @

Then it has the head shots of all the panelists except one.

Then it asks four questions.

Which branch of feminism or skepticism endorses rape culture? 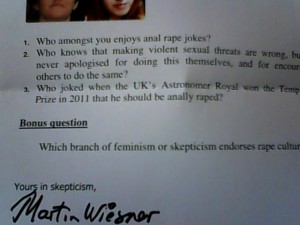 The exodus » « Teach the controversy