Boobquake is still making an impact months later*. You may remember that I sold some boobquake t-shirts in my store promising the royalties would go to charity. The total royalities earned from boobquake shirts was $621.87, and my April volume bonus thanks to the shirts was $369.53. That’s a total of $991.40 raised from Boobquake! Well, the donations have finally been made.

$500 has been donated to the Red Cross for disaster relief, and

$500 has been donated to the James Randi Educational Foundation

The delay in donation paid off, since the JREF is having their Season of Reason right now. What does that mean? An anonymous donor is matching all donations, meaning Boobquake’s contribution to the JREF is effectively doubled to $1,000!

I know that’s still not much for a big organization, but it’s equivalent to one of my paychecks, so I feel like quite the philanthropist right now. But really, the money wasn’t mine – I should be thanking all of you who bought merchandise in order to support these organizations. So, thank you!

We may still debate if boobquake did any good in terms of politics, religion, or women’s rights, but it’s certainly not debateable that it raised money for two wonderful causes.

*The months later part is mostly due to me moving twice after April, first to my parent’s house and then to Seattle. This resulted in Zazzle checks (which are already notoriously delayed thanks to waits in processing) to get returned to sender for a while as they tried to find me. I then realized I could just get paid through PayPal, so that solved that issue. …But yeah, it’s also partially due to procrastination. Oh well, I guess it worked out, since we ended up having a matching donor!

I have a new geeky Christmas card design available in my store. The Christmas Tree of Life: 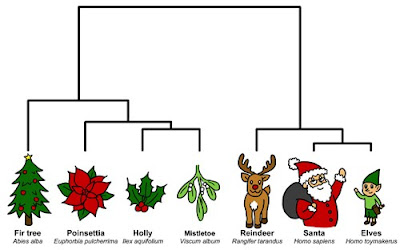 And don’t forget my Darwinian design from last year:

If you’re going to send Christmas cards to scientists or freethinkers, why not do it with a biological twist? Discounts are available if you order in bulk, so go check them out!

Multiple people have been calling for boobquake t-shirts, so I decided to make some really simple ones. 100% of the profit goes to charity, half to the Red Cross (because of their earthquake relief) and half to JREF (for supporting critical thinking and fighting supernatural claims). Go check them out:

Who says science has to be boring? 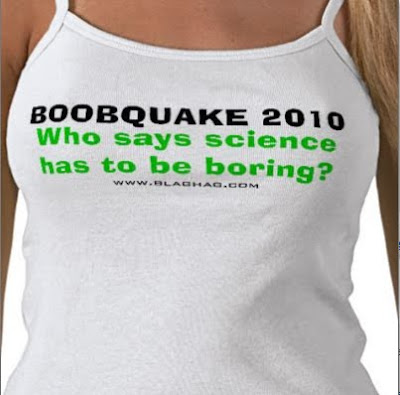 Did the Earth move for you? 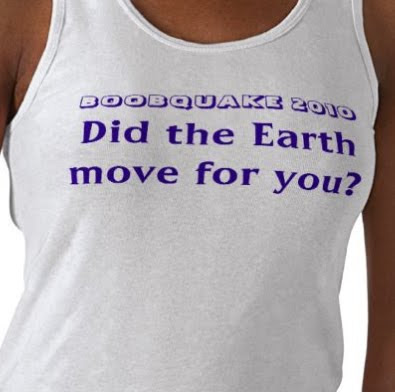 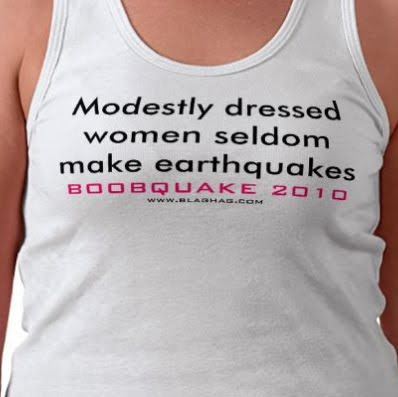 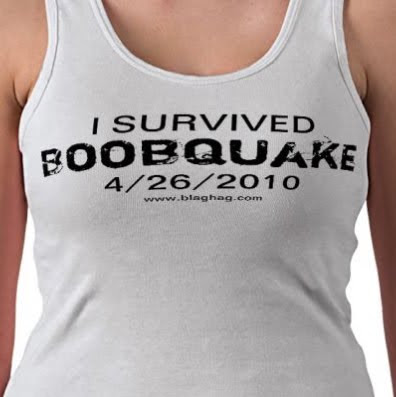 Hm, that last one may be a bit premature. We still may all perish in tank-top induced apocalypse.

There’s new a new design up at Blag Hag Swag, titled the Evolution of Christmas (click for larger image):

Who can deny the resemblance between Darwin and Santa Claus? Except his sleigh is a bit different. I need to include stuff like this in my grad school apps to show how passionate/geeky I am about evolutionary biology.

You can buy it on t-shirts, mousepads, coffee mugs, greeting cards, and postcards. I think the coffee mugs look especially nice, since the design wraps around the whole mug: 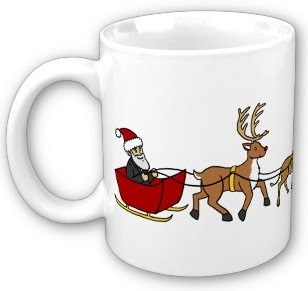 And this is a bit late, but you can get 50% off if you buy 10+ greeting cards or post cards if you enter the code 12DEALSCARDS at checkout before 11:59 pm PT tonight! Even better, you can customize the text of the cards however you want. Merry Christmas, Happy Holidays, Happy Monkey, witty evolution pun – whatever your heart desires. Go spread some nerdy love for the holidays!

If you’d like this available on any other sort of merchandise over at Zazzle, let me know and it shall be done.

Thought I’d let you all in on a little secret. You can get free shipping over at Zazzle.com (where I have my store) until midnight tonight! All you have to do is enter the code “HOLIDAYSHIPS” at checkout. For all of you international people, sorry – it’s only within the US.

If you haven’t yet deduced from my manic tweets, I’m busy. Really friggin‘ busy. But the best thing to do when you’re busy is to procrastinate, so here’s a super quick blog update for you guys.

1. Ray Comfort is a douchenozzle. To secretly move the release of his sullied version of the Origin up a day for the sole purpose of avoiding counter events shows his true colors. He is a scheming slimeball who knows his side has no intellectual merit, and the only way to gain followers is to avoid the peaceful reply of his opponent. Oh, and no, his people did not pass out the Origin at Purdue. I guess we’re just already so religious and conservative that he didn’t want to waste his time here.

2. Guess what came in the mail last week, and what I wore today? 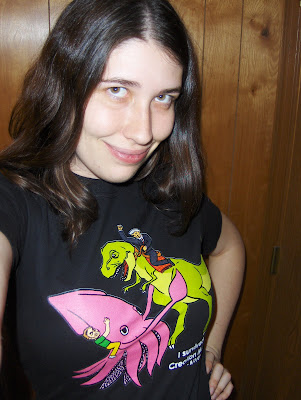 Woooo! My PZ vs Ken Ham Creation Museum Memorial Shirt! It looks awesome on black (a little washed on on white, but still alright). If you have no idea why PZ is on a squid and battling Ken Ham on a T-Rex, you should probably go here, newbie.

Ok, back to writing my summary of the sex determining gene in chickens. WOO BIOLOGY!

So after seventy billion people told me how much CafePress sucks, I decided to switch my store to Zazzle. And boy, is it a ton a better. More customizable, better quality printing, more profit for me, and most importantly, free. Ahem, so here is the real Blag Hag Swag!

And to celebrate the non-crappy store, here’s a present for you: 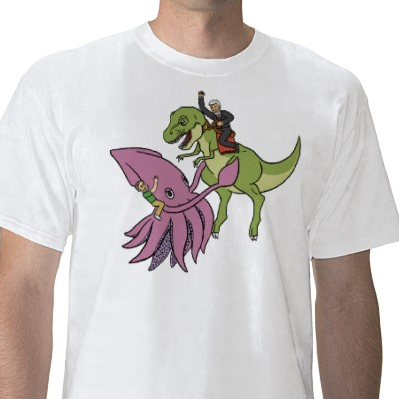 Yep, page 4 of the comic is now available on shirts, mugs, and potentially other crap if you ask me nicely. It’s also available on black (looks pretty classy) and with or without the words “I survived the Creation Museum 8/7/09.” I may be jumping the gun a bit, because who knows, maybe we won’t survive. I guess this is my way of hoping we do.

The one down side to Zazzle? No printing on panties! Come on, what are they thinking? I may keep CafePress around just for that option…

PS: Blog readers who leave inspiring t-shirt designs in the comments have a high likelihood of them being drawn. Especially before school starts.

EDIT: After a million people telling me CafePress sucks, I jumped ship at went over to Zazzle. Much better!

The CafePress store is open, with a delightfully cheesy name to honor my blog: Blag Hag Swag. I’m awful, aren’t I?

Right now all I have is the I (squid) Cephalopods merch:

I have to figure out how much money I’d make in the store before I start putting more designs up. CafePress has a really lame system. Let’s say I have design A and design B. I want to print A on coffee mugs, but I also want to print B on coffee mugs. Well, I can’t unless I buy a premium account. I can print A on a mug and B on a white shirt, but not both on the same type of object. Premium accounts cost 60 bucks a year, and I make about 2 dollars an item…so I guess I have to figure out if I could actually make a profit selling nerdy atheist stuff. Hmm.

What do you guys think?

I needed something lighthearted after yesterday’s drama (which is apparently still continuing today) so I decided to make the PZ/Ham comic a t-shirt. Then I realized I accidentally saved over the large file, so I don’t have a shirt-quality image. Fudgenuggets. Don’t worry, I’ll redraw it as close to the original as possible – you’ll get your shirt soon!

But until then, I thought I’d draw something else for a shirt/mug/merch/etc:

After seeing the comic, someone wanted a shirt that says “I (squid) the Creation Museum.” Not sure if I want to do that – most people will probably not get the reference and think of it as an endorsement of the “museum.” But I liked the image in my head. So what do you think? Would you actually be interested in buying this, and if so, what phrase would you want? I (squid) Science? I (squid) Biology? I (squid) Squids? Let me know!